The 2011 Le Mans Series finale, 6 hours of Estoril, offered a lot of great racing and great battles at the event which was driven under sunny skies at the old F1 venue, Circuito do Estoril. At the end of the race it was Pescarolo Team which was celebrating the win after a race long battle with Rebellion Racing.

“It's been a very good season for us that started and ended with a victory," said Team owner Henri Pescarolo. "It's been all the better as we were up against a very tough rival, Rebellion Racing, a good team with a good engine and very good drivers. We lost the teams' title by very little and we had only one car against their two. I feel sorry for Christophe Tinseau as I'd have liked him to be part of this victory but the duel was too close to risk another driver change.” 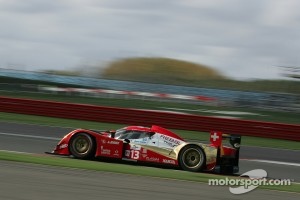 Pescarolo Team and its drivers Julien Jousse, Christophe Tinseau and Emmanuel Collard finished the season on a high by earning for themselves the 2011 Le Mans Series Drivers' Championship. Second place and the 2011 Le Mans Series Teams’ Championship went for Rebellion Racing, when the team number 13 car driven by Jean-Christophe Boullion and Andrea Belicchi crossed the finish line a lap behind the winning Pescarolo. The Teams’ Championship title was the first ever for Swiss based, Rebellion Racing. Third place and the last step on the podium went for the LMP2 winner, TDS Racing and for its drivers: Mathias Beche, Pierre Thiriet and Jody Firth. LM-GTE PRO was won by Ferrari and CRS Racing while the LM GTE AM battle went for IMSA Performance Matmut and Porsche.

Pescarolo Team and its drivers were a faster team today, which meant that Rebellion Racing had to settle for second. Rebellion Racing and its number 13 entry driven by Jean-Christophe Boullion and Andrea Belicchi was chasing the Pescarolo Team after losing the lead during the pitstop on the fourth hour, but in the end they were forced to back down the last twenty minutes of the race due to excess tyre wear. Despite loosing the Drivers' Championship title to Pescarolo, Rebellion Racing with the pole position, second place and third place in LMP1 was able to take home the team's first ever, Le Mans Series Teams' Championship title. Rebellion Racing’s number 12 entry which started the race from pole position, driven by Neel Jani and Nicolas Prost was leading the race at the early minutes, before suffering a gearbox failure. At the end of first hour after the gearbox change the car rejoined the race, to secure the title for the team, 36 laps behind the leader and in the end finished the race 21st overall and third/last in LMP1.

Boullion offered nothing but praise to the winning drivers, “I'd really like to congratulate the Pescarolo team, which has had an unbelievable year. We had a season-long battle and we too have reaped our reward with the teams' title. I was unable to fight back at the end because I was on worn tyres. I was waiting for Julien to make a mistake – but he didn't!” 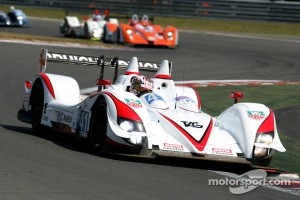 In LMP2 the championship title was already secured yesterday for Greaves Motorsport (drivers Karim Ojjeh, Tom Kimber-Smith, Olivier Lombard) when the team managed to score the one single point for pole position. Today without any pressure the team finished third in class and fifth overall behind the LMP2 winner and third in race overall, TDS Racing (Mathias Beche, Pierre Thiriet, Jody Firth). Between TDS Racing and Greaves Motorsport was the fourth overall and second in class Boutsen Energy Racing team (Dominik Kraihamer, Thor-Kristian Ebbesvik). The LMP2 win was second of the year for TDS Racing.

“I'd like to congratulate the whole team who've done a great job and never gave up," smiled Firth. "It was very tough at the end with the traffic and tyre wear, which I had to nurse. We made a few mistakes but we brought the car home. It's great to finish the season like this.”

LM GTE PRO was won by JMW Motorsport team which started the race from pole position. The Ferrari F458 Italia driven by Robert Bell and James Walker at the early stages of the race was forced to battle for the lead with AF Corse's number 51 entry driven by Gianmaria Bruni and Giancarlo Fisichella. At the very first hour through the Ferrari of AF Corse with Bruni behind the wheel suffered an electrical problem, which was most likely caused by an all new chassis.

JMW Motorsport driver Bell was enthusiastic after the race, “What an end to the race! It's marvellous. The Team Felbermayr Porsche kept up the pressure on us throughout the whole event. The outcome hung on a thread! The final pit stop was the quickest I've ever seen. My thanks to Dunlop who gave us great tyres for the race and we only had to do four pits stops.” 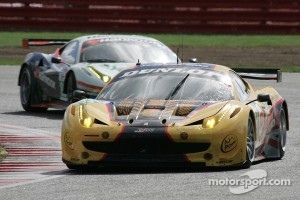 After AF Corse dropped out from the race just after 11 laps JMW Motorsport was forced to battle on the track with couple of Porsche teams including the second finishing Team Felbermayer Proton and its drivers Marc Lieb and Richard Lietz, while IMSA Performance Matmut, also using a Porsche 911 RSR (997) driven by Patrick Pilet and Wolf Hensler, finished third.

At LM GTE AM Porsche was in control when the IMSA Performance Matmut team driven by the dynamic duo, Nicolas Armindo and Raymond Narac completed the full sweep of the 2011 Le Mans Series LM GTE AM category by winning every single race of the championship. Second in class was the Ferrari F430 of CRS Racing (Klaas Hummel, Adam Chistodoulou, Phil Quaife) 2 laps behind the winning Porsche while third in class went to Team Felbermayer Proton’s LM GTE AM entry driven by Chrisian Ried and Horst Felbermayer Jr. who finished 3 laps down.

“The aim was to finish the race and avoid any incidents," explained Armindo. "We did it but it wasn't all that easy. Above all, I wanted to save fuel and tyres but it wasn't very simple in the traffic. Winning in my first season in the Le Mans Series is fantastic. The team gave me a huge amount of help as it was all new to me!”

“It's incredible!" exclaimed Simon. "It's a fitting end to a great season. We did the hardest bit at Silverstone and here we end with a victory. Simply fantastic.”