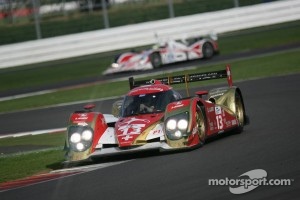 Jean-Christophe Boullion and Andrea Belicchi with the Lola-Toyota #13 finished second at the last round of the Le Mans Series championship in Estoril after a sprint race of 6 hours.

Due to reduced oil pressure in the gear box, car #12 had to stop more than an hour for repairs, just half an hour after the start of the race. Finishing the race in 3rd position of the LMP1 classification, the two drivers never gave up, sucessively setting the fastest laptimes of the race (the fastest by Neel Jani on their Lap 96 with a time of 1'30''702).

For the last Le Mans Series championship with the most powerful prototypes, REBELLION Racing won two of the three trophies to win in the LMP1 category the Manufacturers’ Championship for Lola-Toyota and Teams Championship as well.

« REBELLION Racing have been on an evolving journey since those early days in 2008 and to land the LMP1 Teams’ Championship here in Estoril is just reward for the immense effort, contribution, dedication and determination of each and every member of our Team. When we entered into our partnership with Toyota Motorsport GmbH we took a significant step forward. Michelin have been an invaluable partner for us and our cars have benefitted from using their tyres. This Championship success closes in a fantastic way the chapter of REBELLION Racing's Le Mans Series history. Before we look towards next season, the team will now fly to Atlanta for Petit Le Mans to target 3rd place in the Teams’ ILMC championship. »

« REBELLION Racing is the first Swiss team to win the Le Mans Series Championship. I'm very proud to offer this title to Switerland. I want to thank our partners at Lola Cars, Toyota Motorsport GmbH and Michelin for their efforts and support during this fantastic season.».

« I took a lot of fun fighting so hard during this race. It's a pity that we lost the Drivers championship when we were leading by 3 seconds only 45 minutes before the end of the race. It's shows the harshness of the race. This season, the Team finished first petrol car in Le Mans and won the Teams and Manufacturer LMS championships. All the team can be satisfied and proud of the result. I hope that next year we could have a Drivers’ championship to add to that too! »

« We experienced this week-end a hard but beautiful fight ! Our race went well. The team has done a good job and we are all rewarded by the two LMS championships we won.»

« It's a great disappointment for me. We are the fastest car of the LMS championship but this season, we have had some issues in the races that have stopped us getting the results that our pace deserved. Because of that, we let escape some good results this season. To win a race, we need to be trouble free. Congratulation to Pescarolo Team for winning the race. »

« We had the right pace to win but not the reliable car we need too. For me it’s a shame that it was our car not #13 that had the problem. Congratulation to our team who won the Teams and Manufacturer LMS championships! See you in Atlanta. »