Rebellion Racing went for pole and third on the 6 hours of Estoril grid while the drivers’ championship leader, Pescarolo Team, starts the race from the front row. At LMP2 Greaves Motorsport takes the LMP2 title by scoring a pole position while in LM-GTE Pro, Ferrari of JMW Motorsport was setting the pace.

Rebellion Racing´s number 12 entry of Neel Jani/Nicolas Prost were the fastest today with a lap time of 1.30.118 while the team’s other entry, car number 13 of Andrea Belicchi and Jean-Christophe Boullion will start the final race of the season from third spot at the grid. After qualifying which was held at the famous Portuguese circuit also known as Circuito Do Estoril, Rebellion Racing leads their rivals and second fastest of today, Pescarolo Team (Emmanuel Collard, Christophe Tinseau, Julien Jousse) by 3 points in the team championship standings, but the drivers championship title instead looks to be heading for Pescarolo Team.

We'll only think about the strategy for the title in the final hour of the race.

“We felt very confident after free practice," said Jan after qualifying. "We knew that a three-lap series would be enough to do the job; that's why we came out late. I had a clear lap and the car was perfect. Tomorrow's battle looks like being very intense. We'll only think about the strategy for the title in the final hour of the race.”

At LMP2 category the Le Mans Series LMP2 category champion was already celebrated today by scoring the pole position for tomorrow’s race. Greaves Motorsport earned a single point by being the fastest LMP2 entry of qualifying which was enough to make the team 2011 LMP2 Le Mans Series Champions. Greaves Motorsport with the drivers line up of Karim Ojjeh, Tom Kimber-Smith and Olivier Lombard has had an awesome year so far not winning just the 2011 LMP2 category of Le Mans Series but by also winning the LMP2 category at the 24 hours of Le Mans earlier this year. Team will start tomorrow’s race from fourth at the grid. Fifth fastest overall and second fastest in LMP2 went for Strakka Racing (Nick Leventis, Danny Watts, Jonny Kane) while third fastest in LMP2 and sixth fastest overall was TDS Racing (Mathias Beche, Pierre Thiriet, Jody Firth)

Kimber-Smith was full of joy after the team's tittle winning lap, “The car was perfectly set up to go for a good time over two flying laps. The point for the pole has clinched the title for us. I'd like to thank the whole team for the great job they've done this year. We have a car that's been absolutely reliable and that's our strength.” 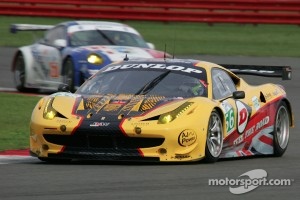 LM-GTE Pro was expected to be tight and so it was with the British JMW Motorsport squad driven by Robert Bell and James Walker taking the pole position from Af Corse´s number 51 squad (Giancarlo Fisichella and Gianmaria Bruni). Third fastest today in LM-GTE Pro was the first of the Porsches, Team Felbermayer Proton and its drivers Marc Lieb and Richard Lietz. Despite in LM-GTE Pro the title has already been won by Ferrari and AF Corse, the runner up is still yet to be decided with Ferrari and Porsche squads having a change to be best of the rest.

If at LM-GTE Pro the year has been owned by the Ferrari F458 Italia, in LM-GTE AM the year has been dominated by IMSA Performance Matmut team driven by Nicolas Armindo and Raymond Narac driving the Porsche 911 RSR (997) and so was today when the team scored another pole position almost being faster than the team’s LM-GTE Pro entry. Next in class went for Ferrari instead when AF Corse (Piergiuseppe Perazzini, Marco Cioci, Stephane Lemeret) and CRS Racing (Klaas Hummel, Adam Chistodoulou, Phil Quaife) were second and third fastest respectably.

“We've worked hard all season and it's up to us to finish with a flourish tomorrow. The pole's important but it's not a bad thing having several GTE Pros in front of us as we won't get caught up in their scrap. We have to try and avoid getting into trouble. Winning the championship is the priority,” said Armindo.

At Formula Le Mans the pole position and extra point traveled to the pockets of the British team Neil Garner Motorsport driven by James Hartshorne, Alex Kapadia and Tor Graves.