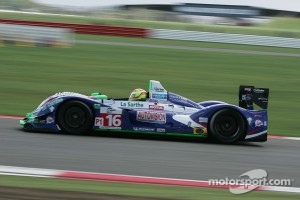 After a thrilling Estoril 6-Hour race the Pescarolo team was able to savour its second victory of the season. Rebellion Racing won the teams' title in LM P1 in the Le Mans Series, and Julien Jousse and Emmanuel Collard bagged the drivers' crown. TDS Racing came first in LM P2, Pegasus Racing in FLM, JMW Motorsport in LM GTE Pro and IMSA Performance in LM GTE Am.

LM P1: the Pescarolo team on top after a nail-biting race

The start of the Estoril 6 Hours was given in blazing sunshine. The no. 12 Rebellion Racing Lola-Toyota in the hands of Neel Jani shot into the lead. He was quickly joined by his sister car driven by Andrea Belicchi who got the better of Julien Jousse in the Pescarolo-Judd. Unfortunately, trouble struck the Swiss team early on as the leader, Jani, had to pit because of a gearbox problem. The car was immobilized for an hour before rejoining driven by Nicolas Prost who set a string of lap records.

The no. 13 Lola-Toyota and the no. 16 Pescarolo-Judd passed and repassed each other no matter who was at the wheel, both on the track and as pit stops intervened. With 5h 25m racing gone neither car had run into trouble when the final refuelling stop intervened, and they were separated by only 2 seconds with Jousse just ahead of Boullion. But Belicchi had felt sick in the car earlier on and this had messed up the team's tyre strategy, and the car went out very early on new rubber. The result was that Boullion was slowed by excessive wear in his final stint, and despite his determination there was nothing he could do about Jousse.

Thus, the Pescarolo team won the Estoril 6 hours, their second victory of the season after Le Castellet. It was a tactical success that was also down to the speed of its two drivers, as Christophe Tinseau did not get behind the wheel in this flat out 6-hour sprint! This victory gave Collard and Jousse the drivers' title - to which Tinseau should be associated. Rebellion Racing won the teams' title thanks to the fact that both cars finished.

The LM P2 battle started with a long duel between the Strakka Racing HPD ARX-01d driven by Johnny Kane and Olivier Lombard in the Greaves Motorsport Zytek Z11SN6-Nissan. The young Frenchman took the lead but the Oreca 03s soon began their race-long domination of the category as their rivals ran into problems. The Zytek had to have a bonnet change, and the no. 39 Pecom Racing Lola overheated while the HPD's oil pump had to be changed. Boutsen Energy Racing and TDS Racing led the category for a long time showing bullet-proof reliability. The Greaves Motorsport Zytek put in a string of quick laps but was unable to pose a serious threat to the Oreca 03-Nissans. And then on the last lap came drama as the Boutsen Energy car crashed handing victory to TDS Racing, which scored its second LM P2 win after Spa. Greaves Motorsport had already won the teams' and drivers' titles before the race even started thanks to its pole on Saturday, and today the British team saw the flag in second place.

FLM: Pegasus Racing, the cherry on the cake!

Pegasus Racing, which has had an incredible season, and had already won the drivers' title, quickly went into the lead in Formula Le Mans and pulled inexorably away from its rivals. Julien Schell, Patrick Simon and Mirco Schultis all helped open up the gap. Neil Garner Motorsport lost a lot of time in the pits due to an alternator problem, and JMB Racing had to change the front bonnet on their car. Even without those glitches Pegasus Racing was head and shoulders above its rivals in Portugal. The Team from Strasbourg scored its fourth win of the season and the teams' and drivers' titles in FLM.

In LM GTE Pro, Rob Bell's and James Walker's Ferrari F458 Italia led the category for a long time and eked out a small gap over its rivals. The Felbermayr-Proton team's Porsche 997 upped the pace after half distance and took first place. With 2 hours to go to the finish Marc Lieb was less than 3 seconds ahead of James Walker. The two cars were running nose to tail till the fourth stop. Rob Bell got back in and opened up the gap again over Richard Lietz who was not giving up, and had the British driver in his sights during the final hour of the race. The seconds passed and the two cars were glued together - they crossed the finishing line separated by only 2/10s with victory going to the JMW Motorsport Ferrari by a whisker!

LM GTE Am: IMSA Performance Matmut ends its season on a high note

Nicolas Armindo made a cautious start as his intention was to finish the race above all else. He kept his promise with a victory to boot for himself and Raymond Narac giving them the LM GTE Championship titles. For a long time the Ferrari F430 of Marco Cioci and Stéphane Lemeret led the category until he suffered a puncture, which necessitated repairs to the front bodywork. The IMSA Performance Matmut Porsche hit the front and was never headed. This victory gave Narac and Armindo the teams' and drivers' titles to round off a superb season for the Rouen-based team.

The no. 42 Strakka Racing won the Michelin Green X Challenge awarded to the car having the best energy performance ratio. The no. 16 Pescarolo-Judd won the overall classification.

Henri Pescarolo (Pescarolo team, LM P1 winner): “It's been a very good season for us that started and ended with a victory. It's been all the better as we were up against a very tough rival, Rebellion Racing, a good team with a good engine and very good drivers. We lost the teams' title by very little and we had only one car against their two. I feel sorry for Christophe Tinseau as I'd have liked him to be part of this victory but the duel was too close to risk another driver change.”

Julien Jousse (Pescarolo team, LM P1 winner): “The end of the race was difficult with worn tyres and the traffic. But in my last stint when I knew I was staying in the car and with new tyres I knew I could push and that Jean-Christophe Boullion was on worn rubber. It was a really great race and the drivers' title is a fantastic reward.”

Jean-Christophe Boullion (Rebellion Racing, 2nd LM P1): “I'd really like to congratulate the Pescarolo team, which has had an unbelievable year. We had a season-long battle and we too have reaped our reward with the teams' title. I was unable to fight back at the end because I was on worn tyres. I was waiting for Julien to make a mistake – but he didn't!”

Jody Firth (TDS Racing, winner in LM P2, 3rd overall): “I'd like to congratulate the whole team who've done a great job and never gave up. It was very tough at the end with the traffic and tyre wear, which I had to nurse. We made a few mistakes but we brought the car home. It's great to finish the season like this.”

Patrick Simon (Pegasus Racing, FLM winner): It's incredible! It's a fitting end to a great season. We did the hardest bit at Silverstone and here we end with a victory. Simply fantastic.”

Rob Bell (JMW Motorsport, LM GTE Pro winner): “What an end to the race! It's marvellous. The Team Felbermayr Porsche kept up the pressure on us throughout the whole event. The outcome hung on a thread! The final pit stop was the quickest I've ever seen. My thanks to Dunlop who gave us great tyres for the race and we only had to do four pits stops.”

Nicolas Armindo (IMSA Performance Matmut, winner LM GTE Am): “The aim was to finish the race and avoid any incidents. We did it but it wasn't all that easy. Above all, I wanted to save fuel and tyres but it wasn't very simple in the traffic. Winning in my first season in the Le Mans Series is fantastic. The team gave me a huge amount of help as it was all new to me!”

Haas: No one side to blame in latest Mazepin-Schumacher clash

Haas: No one side to blame in latest Mazepin-Schumacher clash