Zytek - The Choice of Champions 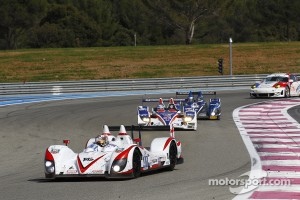 Zytek Motorsport has won the Le Mans Series LMP2 Team and Drivers championships for a second time. When Tom Kimber-Smith took pole position for tomorrow’s Six Hours of Estoril race, he scored the single point necessary to secure the drivers’ title for himself and Karim Ojjeh and the team award for Zytek customer Greaves Motorsport.

Tom’s qualifying lap time of 1m 31.800s was easily the fastest in the LMP2 class showing that the Greaves Zytek-Nissan Z11SN is as quick as it is reliable. With nine minutes left in the 20-minute session, Tom went out on track and put in two almost identical times, either of which would have been good enough for the pole. It is still mathematically possible for others to score as many points but Greaves Motorsports’ three wins from the four previous rounds mean that the championships have been won whatever now happens. Add the team’s emphatic LMP2 victory at the Le Mans 24-hours and you have a remarkably successful season for the Zytek-Nissan Z11SN.

Said Tom, who was also fourth fastest overall, “Everybody knew that we would be coming here to get pole. Quite a few people have been saying that we haven’t shown any pace this year, but today we proved them wrong.”

Tomorrow, Tom shares the wheel of the Zytek-Nissan with fellow champion Karim Ojjeh and with Olivier Lombard. Having missed the early rounds of the championship, including Paul Ricard where the Greaves car finished third overall, Olivier trails his team mates on points but another fine result tomorrow could see him finish second behind them in the drivers’ championship.

This is the second time that a Zytek Motorsport customer has taken both the Le Mans Series LMP2 team and drivers’ championships, a Zytek 09SB from the Repton-based manufacturer having been victorious in 2009.

The Six Hours of Estoril, Portugal takes place tomorrow, September 25, with a rolling start at 1300 hours. Another win will underline a tremendous year for Zytek and Greaves Motorsport.