Montecalvo and Jeannette third on debut for Ram Racing 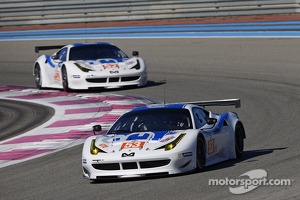 Montecalvo actually led the race in his stint - the decision to fit Michelin rain tires early giving the No.53 Ferrari strong pace.

Rain eventually caused the race to be red flagged 45 minutes early. The safety car had joined the circuit after the first 90 minutes of the race with standing water causing major issues.

Sadly for Jeannette, he never got the chance to do a race lap under green conditions - spending his time aboard the Ram Racing Ferrari behind the safety car.

"If you had said 15 months ago that we would have had a second and third in our first race we would have taken it," Ram Racing team principal, Dan Shufflebottom said.

"It was a really tricky race for the drivers, but we tried to keep them as calm as possible and give them as much information as we could. You know, on reflection, it’s an amazing result for the team; everyone has worked really hard so I’m really pleased for them.”

The GTE class was won by the Proton Porsche of Nick Tandy and Gianluca Roda.