First victory for the ORECA 03 and TDS Racing!

At the head of the field during practice, the ORECA 03s realised a flawless race. TDS Racing and Boutsen Energy Racing give a one-two to the prototype designed at the Signes workshops. In only its third race, the ORECA 03 takes a win on the international level, at the 1000km of Spa.

The whole team did a great job during the whole weekend.

After six hours of racing, Beche/Thiriet/Firth take the win after a great battle with De Crem/Kraihamer. Signatech-Nissan finished in fifth place. In Formula Le Mans, Hope Racing takes the honors, ahead of Pegasus Racing, winner at the Castellet, and Genoa Racing.

Right from the start, the ORECA 03s take the advantage. Soheil Ayari overtakes the polesitting Honda/Strakka Racing. The Signatech-Nissan creates a gap in the first few minutes before being bested by another ORECA 03, that of TDS Racing. Mathias Beche takes over the controls after the first quarter hour ahead of Soheil Ayari and Nicolas De Crem (Boutsen Energy Racing). Three ORECA 03s are at the top of the LMP2 leaderboard., while Race Performance’s car is in sixth before Signatech-Nissan is forced to pit for about 10 minutes. Three ORECA 03s lead at the halfway mark: Boutsen Energy Racing, TDS Racing and Race Performance, followed closely by the Honda/Strakka. After falling to 7th place, the Signatech-Nissan drivers push to reach the top 5, after another long stop. Meanwhile, Race Performance loses ground with two track excursions.

With two hours to go, victory is being played between Boutsen Energy Racing and TDS Racing. Neither team is ceding a single second on the track and it’s on strategy that TDS Racing takes the win, as Pierre Thiriet explains after getting out from the car: “Mathias (Beche) did everything he could to conserve fuel at the end of the race, which allowed us to take the victory. The whole team did a great job during the whole weekend.” On only his third race in sportscars, Pierre finds the highest step on the podium. “The three drivers committed not a single error. For me, I had to get used to the traffic. I completed a double stint without having the slightest problem on track. I’m overjoyed by this result which gives me even more confidence for the future. The ORECA 03 is a really good car and I’m now really familiar with it.”

For their part, Dominik Kraihamer and Nicolas De Crem had a smart race, without encountering a single problem. Under the watchful eyes of Thierry Boutsen, the team is showing well, after two seasons in Formula Le Mans. Mailleux/Ordonez/Ayari (Signatech-Nissan) had a quiet end of race to rally 5th place at the end, two places ahead of Frey/Meichtry/Rostan (Race Performance). In Intercontinental Le Mans Cup, Signatech-Nissan leads the championship, four points ahead of OAK Racing. 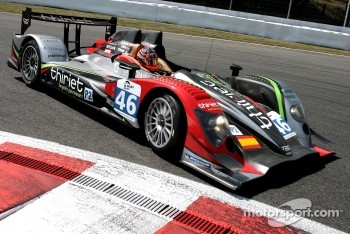 “Congratulations to TDS Racing, giving the ORECA 03 its first victory,” declared Hugues de Chaunac, President of Groupe ORECA. “It’s even a one-two thanks to Boutsen Energy Racing. I’m very happy to see this prototype succeed in LMP2. The teams who have entered the ORECA 03 have shown that it’s well designed. These are good teams. TDS Racing and Boutsen Energy Racing are new to LMP2 but are already very competitive. They also have drivers graduating from Formula Le Mans, which is nice. Bravo to them. It’s a great joy to see them on the top step of the podium!”

With five ORECA-FLM 09 at the start, the race was anyone’s to win. Hope Racing never looked back: Luca Moro, Zhang Shanqi and Nicolas Marroc had a perfect race, the only holdups being two stops to clean out the radiator. The Chinese driver Zhang Shanqi is proud of this victory: “I’d like to thank the whole team for this great result, which I hope is one of many. We had a scare near the end, but we couldn’t be happier.”

Winner at Paul Ricard HTTT to kick off the Le Mans Series season, Pegasus Racing was hoping to continue the trend. Schell/Schultis/Simon finish in second place after avoiding trouble. Julian/Zugel/Petersen (Genoa Racing) complete the podium despite an off-track excursion. Neil Garner Motorsport and JMB Racing weren’t spared from racing incidents either with the two teams finished further down the overall classification.

Next rendez-vous for ORECA Race Car Manufacturer will be next month at the 24 Hours of Le Mans, third round of the Intercontinental Le Mans Cup where Signatech-Nissan and Race Performance will be competing.