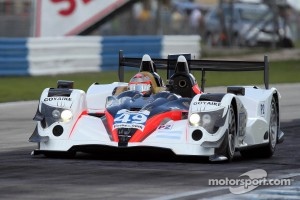 After the opening race at Sebring with the the third place in the LM P2, next coming race is the 6 Hours at Le Castellet. The Pecom Racing’s season is divided in FIA World Endurance Championship (WEC) and European Le Mans Series (ELMS) with the same great possibilities in both championships on the Oreca 03-Nissan LM P2 prototype.

For the race at Paul Ricard, first event of the ELMS (Sunday April 1st) Gianmaria Bruni will join the grid together with Luis Perez Companc and Pierre Kaffer. Soheil Ayari - member of the Pecom Racing crew along the season, both FIA WEC and ELMS, with Companc and Kaffer – is recovering from a shoulder injury. The French driver needs to be at 100% at Spa, second round of the FIA WEC (May 5th) and he is at rest in the next days.

The LM P2, the new leading category of the ELMS, has the most teams with twelve entrants ready to go head-to-head. There are some of the best international drivers: among the stars, of course, there is Pecom Racing crew.