Pegasus Racing back in the top category in European endurance racing!

Pegasus Racing will also send in an entry application to the Automobile Club de l’Ouest with a view to taking part in the Le Mans 24 Hours for the second time!

In 2014, the Strasbourg-based team, Pegasus Racing, will be back in a category, a championship, and maybe a major event, which it knows well. The team has just bought a Morgan LM P2 prototype powered by a Nissan engine that it will enter in the 2014 European Le Mans Series in what is the first stage of a 3-year programme. Pegasus Racing will also send in an entry application to the Automobile Club de l’Ouest with a view to taking part in the Le Mans 24 Hours for the second time!

The squad from Alsace is making its comeback to a category in which it already has considerable experience. Claude and Julien Schell’s team competed in the 2009 and 2010 Le Mans Series with an LM P2 prototype. The following season it dominated the Formula Le Mans category in the same championship racking up four victories in five races.

An invitation to the Le Mans 24 Hours was the cherry on the cake. Unfortunately, the Alsatians were unable to combine the right conditions to put on a good performance, and they decided to await a more favourable opportunity for their second outing in the Sarthe classic. 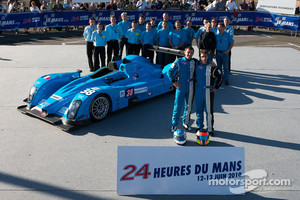 “We preferred to take one step back in order to do two forward,” analyses Julien Schell. “In 2009 we arrived in LM P2 with a Courage that was already an old design. Even so, the results were pretty satisfactory. We learned a lot and we showed that we had what it took to race in endurance at the top level. On the other hand, in 2010 we took part in the Le Mans 24 hours in a Norma that had done virtually no running, which, in addition, trail blazed the orientation that the ACO wanted to give to the LM P2 regulations.

There too we were on the pace until we had to retire due to a collision in traffic. So today we’re more than ready to take up this new challenge. With the Morgan we have a quick, reliable car that’s capable of fighting at the front on a regular basis. We can also count on the technical support of the factory, which is crucial.”

This comeback is the fruit of a partnership with Swiss driver Niki Leutwiler that began in 2013, and was crowned with a double title in the Speed EuroSeries. “Niki and I raced and won last season with the Ligier,” Schell continues. “He has renewed his trust in us to move up another level. As the ELMS regulations have evolved to events lasting four hours instead of three, we’re on the lookout for a third driver who wants to be part of this new adventure with us.”

“For the first time since the start of my long career in motor sport I’ve found myself a home at Pegasus Racing,” Leutwiler emphasizes. “The strength of the team is to combine a passionate, enthusiastic, even family-like ambience with top-class professionalism.”

The Morgan LM P2, which bears the name of the famous British make, has been designed and developed by the constructor Onroak Automotive in its workshops in the Technoparc des 24 Heures du Mans, a stone’s throw from the world-famous circuit. In 2013, the Morgan-Nissan LM P2s entered by OAK Racing scored a double in the Sarthe and then won the LM P2 Trophy in the FIA World Endurance Championship.

Pegasus Racing will receive its Morgan LM P2 at the beginning of February, and this will give the team time to do some private testing before the official European Le Mans Series tests on 1-2 April.