Pegasus Racing’s first run with the Morgan-Nissan LM P2 will take place in March before the official European Le Mans tests on 1-2 April.

The performance and reliability of the Morgan LM P2 designed and developed by Onroak Automotive no longer need confirmation: its entry by different teams and its successes throughout the world are proof enough. 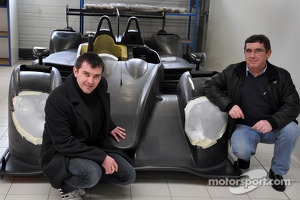 Pegasus Racing, the outfit founded by Claude and Julien Schell, has just bought a Morgan LM P2 prototype, which it will run in the 2014 European Le Mans Series, the first step in a 3-year programme . The team has also sent in an entry request to the Automobile Club de l’Ouest to take part in the Le Mans 24 Hours for the second time. The Pegasus Racing Morgan LM P2 will be powered by a Nissan engine.

With two titles in the VdeV Challenge Endurance Proto in 2006 and 2008, two seasons with an LM P2 prototype in 2009 and 2010, the following year in the Formula Le Mans Category, which it dominated, then a double title in the Speed EuroSeries in 2013, the team from Strasbourg has built up a solid base of experience in endurance racing. Today, it is ready for this new adventure and is looking forward to more successes.

Julien Schell team manager and driver, Pegasus Racing: “Today we’re ready for this new challenge. With the Morgan LM P2 we have a quick, reliable car that is capable of fighting at the front on a regular basis. We can also count on the technical support of the factory, which is crucial.”

Jacques Nicolet, Onroak Automotive President: “I’m very happy that Pegasus Racing has chosen a Morgan LM P2 for its return to endurance at the highest level. Onroak Automotive will do its very best to help this endeavour meet with success. At the start of this year I would like to wish the team the best of luck in 2014.”

Pegasus Racing’s first run with the Morgan-Nissan LM P2 will take place in March before the official European Le Mans tests on 1-2 April.

Pegasus Racing back in the top category in European endurance racing!

Jaguar powers back to series with Rocketsports Racing