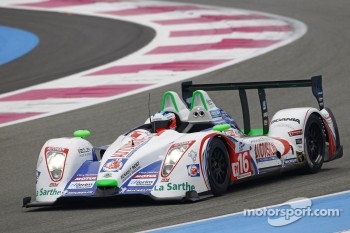 Emmanuel Collard is the first driver to leaves his box, driving his Pescarolo down the pit lane, followed by the thunderous sound of his V10 Judd... Just another day at the racetrack? Not for Henri Pescarolo, especially if you consider that the last time such thing happened was 18 month ago. So, March 11th was indeed a very emotional day for Henri and the whole Pescarolo crew.

All our partners, Autovision, Eolen, Renault Rent and Motul, all our friends and supporters who made the trip to the south of France were pretty much like all of us: speechless...

However, eighteen month couldn't rust our well-oiled machinery and as soon as the Pescarolo-Judd achieved its first lap, everyone was ready to prepare the 2011 season. First, we had to rediscover a car, improved in a wind tunnel back in the end of 2009 but never tested in real life conditions.

Would we perform against the competition under the new technical rules? Of course, Peugeot and Audi were absent, preparing the Sebring round in ILMS but our direct competitors in the Le Mans Series were there.

Ultimate performance was not our main objective. First, we had to process, record and analyze numerous mechanical and aerodynamic tests in both 24 Hours (Paul Ricard is a fast track) and Spa configurations*.

Christophe Tinseau carried on the tests in the afternoon and Julien Jousse took the wheel at the end of the day, demonstrating his ability to quickly adapt to a new car.

In the end, fastest times officially registered for all four LMP1 present this day were within half a second. A rather encouraging result, to be confirmed in three weeks during the first race.

Later that day, we officially presented the car with its new paint scheme with the serenity of an experienced team, ready to face new challenges.