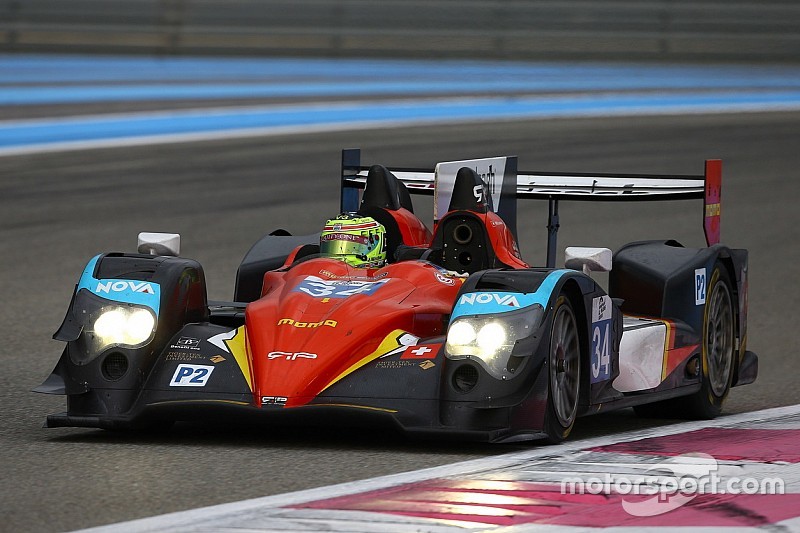 The Swiss Race Performance Team will be part of ELMS again this year, taking part in two categories.

It was quite an impressive field that gathered at Paul Ricard recently for the first ELMS test in 2016. 42 cars, with all three classes, LMP2, the new LMP3 and LMGTE showing up. During two days of testing in mainly dry conditions – apart from the last hour of day 2 – and with temperatures up to 17 degrees, they already gave a nice impression about what to expect of the coming season which will start at 15th/16th of April at Silverstone during the WEC weekend. The Swiss Race Performance Team will be part of this attractive long distance racing series again this year, taking part in two categories, with the well-established LMP2 Oreca 03 Judd and a new LMP3 Ligier JS P3 Nissan.

For this test, Niki Leutwiler, already Asian Le Mans Champion 2015/2016 with Race Performance, shared the LMP2 car with British sportscar driver James Winslow and Franck Mailleux from France, who already raced for Performance Race in 2014. So far, Leutwiler is the only driver already set for the final line-up for ELMS as well as the 24 hours of Le Mans. Due to former successful participations in the past with five five finishes out of five starts, Race Performance again received an invitation for the classic French event – a huge honour for the team.

Mailleux was happy about his return to the Swiss team: “It was nice to be back at Race Performance, a good feeling to work again with the engineers I already knew. Unfortunately it did not go as well as we had hoped for. We had a few problems to get the set up working with the new Dunlop tyres, which are quite different from what I knew so far from 2014. We have to change the whole set up philosophy, but so far we do not know exactly which way to go in every detail.” Nevertheless the 30-year old is adamant that “a solution for sure will be found until Silverstone. In general the competition seems to be even bigger and stronger this year. So we have to act in a very clever way as far as race strategy is concerned and also pay attention to things like not getting into any troubles during pit stops for example”

Winslow was impressed by the team as well: “I drove for Race Performance for the first time here in Paul Ricard and we hat two very productive test days”, the 32-year old Brit explained. “Most of the time we did high fuel runs, went through the whole range of tyre testing and worked o lot on the set up for Silverstone and the further future already.”

Here the driver line-up for 2016 is already fixed. The three guys who drove the car now at Paul Ricard during testing will be the ones behind the wheel for the whole season. Italo-Swiss Marcello Marateotto, Giorgio Maggi from Switzerland and Belgium Bert Longin make for a quite interesting mixture of youth and experience.

18-year-old Maggi, who already raced for Race Performance in Formula 4, clearly is the youngster. Now, he drove for the first time at all at Paul Ricard circuit. “So I still had a bit of trouble finding the right line at day one, especially through sector three. The times we did were quite okay, but the set up felt very different from morning to evening. For me personally the night run was a real highlight. It was the first time I was driving at night, at a quite poorly lit circuit, it was really cool”, he stated. “At the end of the second day our set up was definitely more competitive, even if our times where not the fastest yet. But for sure there is more to come. When the rain started with one hour to go, it was not easy for me either as I had never driven this car in the wet before. Also visibility was really quite bad. But I managed to adapt and my lap times got better towards the end.”
The team at least was quite impressed by his performance in the rain...

Maggi´s counterpart is 50-year old Longin, bringing a lot of experience and routine with him. It´s his first year with Race Performance and he already showed his contention with the team after the first test with the Swiss squad: “I got to know the car and the team, and it all feels very good. We managed to clearly improve the car – but of course there is still a lot of work to do. Everybody is very calm, working in a completely focused way. I am happy with the car and my new teammates and I am already looking forward to Silverstone or maybe another test in between.”

Marcello Marateotto, 2015 Champion of the Radical European Masters - Supersport, is also very positive: “We are really content with the two test days, we showed great teamwork, drivers at an equal performance level. We managed to bring the car to a standard that satisfies our expectations. We have a nicely drivable car now, even if we are not ranking at the very top of the time sheets for the moment. But this is going to change in due course for sure.”

Team principal Michel Frey shares this optimistic opinion while also looking forward to working again with sponsor MOMO. “We are proud of being able to represent the MOMO colours again. MOMO always featured interesting cars and projects and we are convinced we can follow this line with our current project now. The team has a very good basis, we have talented and equally strong drivers, so it should be possible to fight for top positions. But it is always difficult to give a detailed prognoses in advance. Most likely we will only better where we really are after the first race.”