After good performances in free practice and the pole position secured by Neel Jani, the REBELLION Racing team had high hopes of victory at the 6 hours of Le Castellet, the first round of the 2011 Le Mans Series. 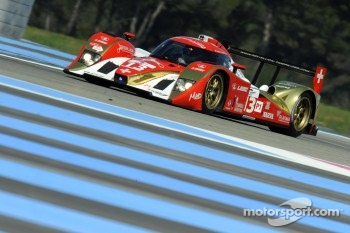 In the early laps, Neel Jani, driving the Lola-Toyota #12 kept the lead and quickly extended an advantage over the next car. But after half an hour of the race, Neel found himself unable to select any gears and the car was stuck in 5th. The Lola-Toyota was forced to come back to the pits to have the gearshift air compressor replaced. During the repair, Nicolas Prost took over behind the wheel and the car rejoined 12 laps behind the leader. Despite repeatedly posting the fastest lap, Nicolas and Neel were unable to catch up to the lead lap, although they had a good comeback drive from 28th to 7th position and in the process reduced the deficit by 2 laps to the victorious Pescarolo car. Nicolas Prost was credited with the fastest lap of 1'47''465 (vs 1'48''367 for Emmanuel Collard in the Pescarolo #16 race winning car).

Starting from the third position on the grid, the Lola-Toyota #13 car was also struck by bad luck. Jean-Christophe Boullion had a spin in the first racing lap when the driver's side door unexpectedly came open. After pitting to get the door closed, the car rejoined, and Jean-Christophe Boullion began to recover ground. But he had to stop again when the door came open again, and some time was lost in trying to more effectively secure the door.

Jean-Christophe Boullion and Andrea Belicchi attacked relentlessly throughout the rest of the race rising to second place by the half way stage, two laps behind the leader. The Lola-Toyota #13 took the chequered flag in 2nd place, one lap behind the winning Pescarolo.

Whilst pleased to be on the podium, REBELLION Racing felt some disappointment that the pace shown by both their cars didn't convert to the hoped for victory in the race. But at least the consolation is that both of the Swiss team's Lola-Toyota cars finished on the LMP1 podium, scoring important points for the championship.

We are obviously disappointed not to win the race.

Jean-Christophe Bouillon -- Lola-Toyota 13 : "We are obviously disappointed not to win the race. We lost our chance because of a quite unexpected problem with the door, which is annoying, but that's racing. I am still very satisfied with the work accomplished on the car this weekend. Aside from this rare technical problem, we have not had any serious mechanical problems and the car is now very enjoyable to drive, which bodes well for the rest of the championship."

Andrea Belicchi -- Lola-Toyota 13 : "Given the performance achieved during testing and our strategy, our only goal was to win. Everyone will understand that the race did not go as we had hoped. However, we scored valuable championship points, which is ultimately a good start to the season for us. "

Neel Jani -- Lola-Toyota 12 : "Yesterday was very good for us (first pole position for REBELLION Racing). We were the fastest car on the track today, but a technical glitch denied us the victory. We're obviously disappointed. What is needed now is to win."

Nicolas Prost -- Lola-Toyota 12 : "I am proud of the work that we have conducted with Neel. We have proved over the weekend that our car was very fast. For the team, it reinforces our confidence in the real potential of our cars. We must now address some issues with our technical partners to avoid jeopardising potential wins. "

Bart Hayden REBELLION Racing Team manager : "The final race results of this weekend weren't what we hoped for or expected. Although the ultimate success was not on our side, at least we can draw some satisfaction from the performance of our two cars. Thus, despite the disappointment of having missed the win, the team is not disheartened, but rather happy to know that we really do have a potentially winning package. The Toyota engine has once again proved its reliability and performance. We will have a new aero package for the next races, to help us rise to a higher level in our progression."