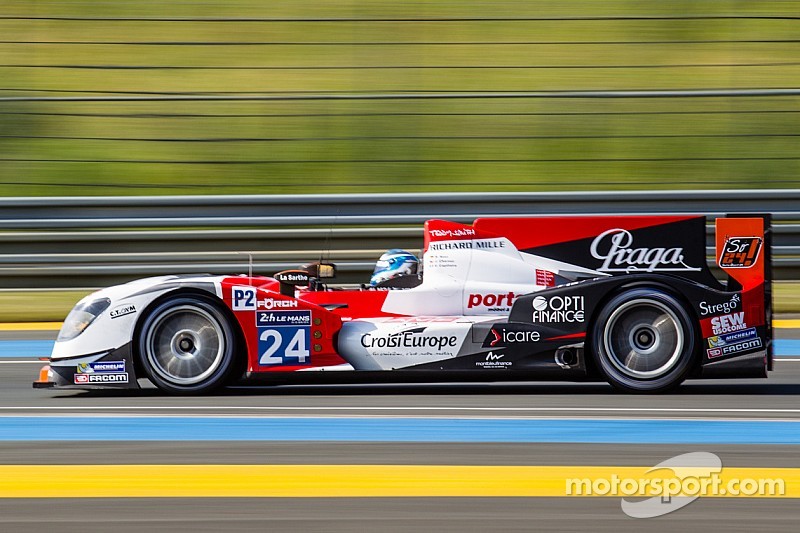 Team claims its first ever victory in LM P2 with Vincent Capillaire and Jimmy Eriksson at the wheel.

Sébastien Loeb Racing has won the European Le Mans Series (ELMS) 4 Hours of Estoril today (19 October) in the #24 ORECA 03R, as well as completing the team’s 100 per cent finishing success in 2014.
After a perfect race, the team claims its first ever victory in LM P2 with Vincent Capillaire and Jimmy Eriksson at the wheel. The Swedish driver was making his sportscar debut in Portugal !

At 17h30 local time, Vincent Capillaire (FR), who has raced for the team all season, crossed the finish line of the four-hour long race with a 35.39-second lead over the second placed car. “The team won this race so strongly because of hard work over the year – it has all been working to this point,” commented Capillaire. “All of the guys were really efficient and it’s not only a driver win but a team win.

We have always won a race each season in every car we have run so it was very important to win with our LMP2 also.

My team-mate Jimmy [Erikson] did a great job this weekend. We know he is very quick in GP3 but here he had to learn a lot with managing traffic and driver changes. He did a great job so I take my cap off to him. I feels great to be on the top step of the podium and I would like to dedicate this win to my friend Bruno.”

Joining Capillaire in the team this weekend was Swedish GP3 star and 2012 German F3 winner Jimmy Eriksson, who made his sportscar debut, and proved that Sébastien Loeb Racing has selected and supported the endurance racing talent of the future.

“I’m obviously very happy with today,” commented Eriksson. “There were a lot of challenges for me coming from single-seaters. I had to adapt to the car, the tyres and the engine. The team was great and gave me lots of time in the car in the two free practice sessions and also let me drive in qualifying to get extra seat-time. They couldn’t have helped me adapt more than they did.

We have had some good races this year but in this race it all came together.

“In the race, the biggest difference between sportscars and single-seaters is to manage all of the traffic. I have to thank the team because they did a fantastic job to teach me and I am very happy. I hope to return to endurance racing again soon.”

This win is the first LMP2 victory for the team, which has supported young drivers including Arthur Pic, Andrea Roda and René Rast this year. This evening, they became the fifth team in five races to win in the 2014 European Le Mans Series proving just how competitive the championship has been.

"This is the kind of story endurance can offer,” commented Franck Tiné Sporting Director for the team. “We have had some good races this year but in this race it all came together. We pushed hard and believed in ourselves and we therefore all deserve this victory.

“In each race, we like to have a young driver join us – it is part of the spirit of the team to give good talent a chance, to give them a step-up for the future. We had a great result in Paul Ricard and we wanted to build on that here this weekend. Jimmy was a great choice. He listened to all of the advice and what he did during the race was impressive – he drove like a very experienced endurance driver.”

For Technical Director Leo Thomas, who has been with the team since the beginning, the win was particularly important. “We have always won a race each season in every car we have run so it was very important to win with our LMP2 also. This is a great achievement as now we have won in every category we have raced in. I am very proud of the team.

"For sure we had some difference in pace this weekend, so we knew we had to race without mistakes, just like we did in Imola. In the end, it was the perfect race – we made no mistakes. The drivers were perfect and we had great pit stops and good strategy. The pace was still not as quick as the competition but our clean race got us the win.

“This is the perfect end to our season.”

After this brilliant win in ELMS, Sebastien Loeb Racing will be at Paul Ricard Circuit next week for the GT Tour finale. The team will fight for the title in French GT Championship, as the current leader, as well as in Porsche Carrera Cup France.