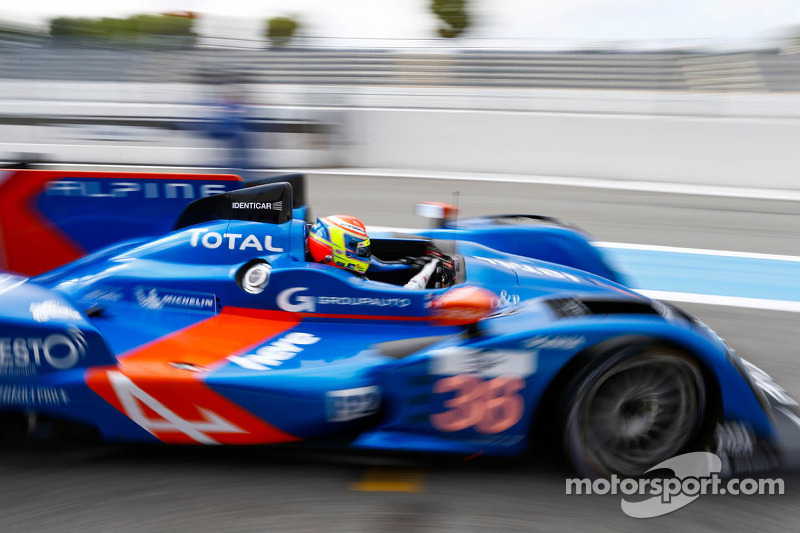 The final race of the 2013 European Le Mans Series saw drama and excitement before the chequered flag was shown to Brendon Hartley in the Murphy Prototypes Oreca-Nissan, who finished ahead of Natacha Gachnang in the nr43 Morand Racing Morgan-Judd and Simon Dolan in the nr38 Jota Sport Zytek. However the day belonged to the Signatech Alpine team and Nelson Panciatici and Pierre Ragues who were crowned 2013 ELMS Champions despite finishing 4th overall. Their nearest rivals for the title, Thiriet by TDS Racing and Pierre Thiriet, had a torrid race after Mathias Beche lost a rear wheel forcing the car into the pits for several laps and destroying any title hopes they had.

The LMPC title went to Gary Hirsch and Paul Loup Chatin but the victory belonged to Soheil Ayari and Anthony Pons after the championship winning car also had technical issues, forcing the team to take the car to the paddock for repairs. However the Team Endurance Challenge crew got the car back on track and they secured enough points to be confirmed as 2013 title winners.

Matt Griffin and Johnny Mowlem dominated the LMGTE proceeding to take the 2013 title in style with their third win of the season in the nr52 RAM Racing Ferrari.

In GTC the no69 SMP Racing Ferrari 458 Italia GT3 of Fabio Babini, Viktor Shaitar and Kirill Ladygin took their 4th win from four starts in the 2013 ELMS to take the GTC title for the Russian team in their inaugural season on the European stage.

Race action in the season finale

The 3 Hours of Paul Ricard started with the 26 car grid speeding across the start line and all heading into the first corner. Oliver Turvey in the pole position holding nr38 Jota Sport Zytek-Nissan led into turn one but came under pressure from Jonathan Hirschi in the nr18 Murphy Prototypes Oreca-Nissan, the Swiss driver challenging for the lead. Hirschi kept up the pressure for the opening lap but Turvey held his nerve and his position at the front of the field, soon opening up a gap.

Mathias Beche in the nr1 Thiriet by TDS Oreca was also having his own problems as Christian Klien was challenging the Austrian for third place and after several laps Klien moved ahead of the Swiss driver.

In LMGTE Joel Camathias in the nr66 JMW Motorsport Ferrari briefing took the lead from Matt Griffin in the nr52 RAM Racing 458 but the Irishman regained the lead by the end of the lap, a lead he never lost again.

Beche was losing ground to the top three cars when the left rear wheel came off the car and spun the car round at the final corner. Beche took the car into the pits and after repairs he regained the track but several laps behind the leaders and out of the running for the championship.

Klien caught and passed Hirschi for second place but was over 11 seconds behind Turvey in the leading Jota Sport Zytek. Further back the nr37 SMP Racing Oreca Nissan of Maurizio Mediani was making progress up the field, first passing the nr34 Race Performance Oreca-Judd of Michel Frey and then the nr36 Signatech Alpine of Pierre Ragues in short order. However all this hard work was undone when the car spun in a cloud of tyre smoke at turn 5 and a lot of time was lost rejoining the track.

In LMPC Paul Loup Chatin was holding a comfortable 6 sceond lead over Anthony Pons and looked to be heading to victory and confirmation of his and Gary Hirsch’s championship. Pons had a spin at pit entry which allowed Chatin to pull further ahead but then disaster struck on the first pitstop. The starter motor on the nr49 Oreca09 failed and the car had to be taken into the paddock to be worked on. Gary Hirsch rejoined the track a short time later but Soheil Ayari held a comfortable lead until the chequered flag.

In LMGTE Matt Griffin was still holding the lead when Camathias came in to hand over the nr66 JMW Ferrari to Andrea Bertolini, allowing the nr53 RAM Racing Ferrari and the nr77 Proton Competition Porsche to move up the order but Bertolini moved back up the order and was in second place, one lap adrift of Johny Mowlem in the nr 52 RAM Racing Ferrari as the race entered the final phase.

Back at the front Turvey had handed over the Jota Sport Zytek to Simon Dolan, with Natacha Gachnang and Brendon Hartley taking over the driving duties in the Morand Racing Morgan and the Murphy Prototypes Oreca. Gachnang soon caught the struggling Dolan but the Briton was not going to surrender his position easily. This allowed Hartley to close the gap to the battling duo and swept past both cars to take the lead. Gachnang pushed a little too hard and spun off the track but rejoined quickly to start the process of reeling in the Jota Zytek all over again. She was soon on terms and after a quick battle the Morand Racing Morgan was ahead and in second place. Meanwhile Hartley had opened up a big gap.

The nr36 Signatech Alpine was having a few issues and Nelson Panciatici was only behind the wheel for one lap before he headed back to the pits for a replacement steering wheel. This, coupled with a problem for Ragues in an earlier pitstop, put the Signatech Apline down in 5th place. Panciatici pushed to regain one place from the Boutsen Ginion Racing Oreca of Alex Kapadia before the end of the race.

At the chequered flag Brendon Hartley took the first win of the year for Murphy Prototypes, 6.6 seconds ahead of the Morand Racing Morgan-Judd of Natacha Gachnang, the best result of the season for the team. Simon Dolan brought the Jota Sport Zytek home in 3rd place 15.4 seconds behind Gachnang and 62 seconds ahead of Panciatici’s Signatech Alpine, but 4th place was enough to secure both the team and driver’s titles.

The winners of the LMGTE and GTC classes also became the 2013 champions, with SMP Racing securing a 1-2 in the GTC class at Paul Ricard. Matt Griffin and Johnny Mowlem secured the LMGTE title, while 3rd place for the nr77 Proton Competition Porsche 911 of Nick Tandy, Christian Ried and Klaus Bachler gained enough points to secure an automatic invitation to the 2014 24 Heures du Man alongside champions RAM racing. European Le Mans Series