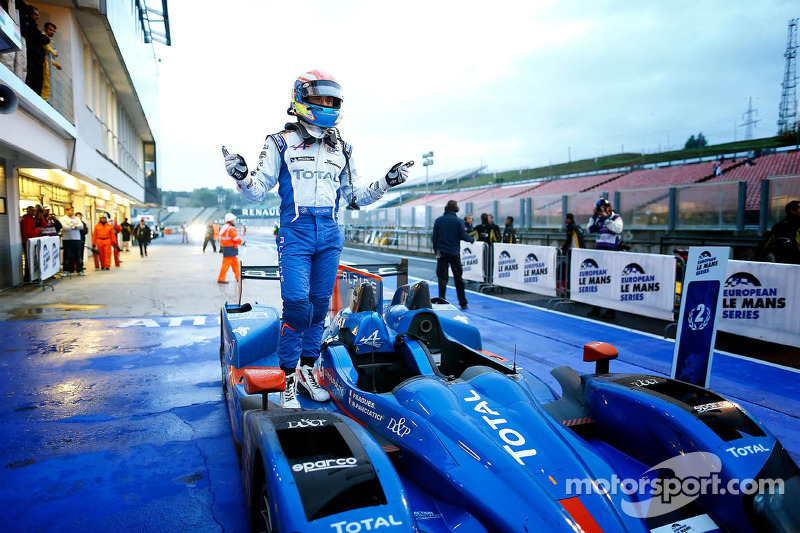 Pierre Ragues and Nelson Panciatici took the chequered flag after 82 laps of racing over a lap ahead of the nr18 Murphy Prototypes Oreca Nissan of Jonathan Hirschi and Brendon Hartley.

A dominant win in challenging weather conditions at the Hungaroring for the nr36 Signatech Alpine of Pierre Ragues and Nelson Panciatici has set the stage for a championship showdown at Paul Ricard in two weeks with reigning champion Pierre Thiriet and the Thiriet by TDS Racing team for the title of 2013 European Le Mans Series Driver and Team Champion.

Panciatici took the chequered flag after 82 laps of racing over a lap ahead of the nr18 Murphy Prototypes Oreca Nissan of Jonathan Hirschi and Brendon Hartley, which marks the best result of the season for the Irish team.

The nr49 Team Endurance Challenge Oreca of Gary Hirsch and Paul Loup Chatin scored another victory in the LMPC class, finishing 9th overall. However their teammates in the nr48 FLM Oreca, Soheil Ayari and Anthony Pons finished second to keep the title challenge alive for the final race of the 2013 season.

The nr77 Proton Competiton Porsche 911 GT3 RSR of Christian Ried, Nick Tandy and Klaus Bachler scored their first win of the year, with Bachler taking the chequered flag in 6th overall, 45 seconds ahead of points leaders Johnny Mowlem and Matt Griffin in the nr52 RAM Racing Ferrari 458. It means that Mowlem and Griffin hold a 23 point advantage over Ried going into the final race of the year.

It was victory number three from three race starts for the nr69 SMP Racing Ferrari 458 of Fabio Babini, Viktor Shaitar and Kirill Ladygin in the GTC class. It was all smiles in the Russian team’s garage as the nr72 SMP Ferrari finished in second, just 0.5 seconds behind. The battle to see who will become the GTC team and driver title holders will be one to watch in Paul Ricard in two weeks.


After torrential rain during the morning that produced an interesting grid for the 3 Hours of Hungaroring the track was wet but drying as the cars set off for two formation laps behind the pace car. At the start Jonathan Hirschi in the nr18 Murphy Prototype Oreca Nissan kept his cool and took a wide line into the first turn.

The nr37 SMP Racing Oreca of Maurizio Mediani dived down the inside of the lead car but ran wide on the exit allowing Hirschi to regain the lead. Gary Hirsch in the nr49 LMPC class FLM Oreca made a great start to finish the opening lap in 4th place overall ahead of many of the LMP2 competitors. His teammate Soheil Ayari had problems with the level of grip in the tricky conditions and spun twice on the opening lap but kept the car on track.

Meanwhile Pierre Ragues in the Signatech Alpine was making progress from third on the grid. On lap 2 he passed the SMP Racing Oreca-Nissan for second place and two laps later he caught and passed the nr18 Murphy Prototype for the lead.

Championship leader Pierre Thiriet was having a difficult time after starting 7th on the grid. The car was damaged on the opening lap in a collision and the Frenchman had to pit for a new nosecone, dropping him down the field, a place he had to start the long recovery back up the field.

Once clear of the rest of the field Pierre Ragues opened up a large gap to Hirschi and set the fastest lap of the race several times as a dry line started to form. The dry line forced several of the teams to head to the pits to swap over to intermediates or wets but with the track still wet in a lot of places it was a tough decision to make.

In LMGTE the nr67 IMSA Performance Matmut Porsche of Jean-Karl Vernay was making its way to the front of the grid from 17th on the grid and by lap 8th he was up to 6th and heading the LMGTE field ahead of Matt Griffin in the nr52 RAM Racing Ferrari.

As the lap counter counted up Jonathan Hirschi in the Murphy Oreca was coming under pressure from Oliver Turvey in the JOTA Sport Zytek. The British driver was soon challenging for the second place but Hirschi was defending cleanly at every turn.

However just when it seemed that Turvey was going to take the position the Zytek slide off the track at Turn 1 with a flat left rear tyre and the nr38 Jota Zytek had to crawl back to the pits for an entire lap, allowing Hirschi to gain a bit of breathing space.

Tyre choice was still proving a tricky choice and some teams were choosing slick tyres and some intermediates but the decision was still proving marginal and several cars were seen sliding off the track as they tried to find grip.

On lap 42 the nr52 Ferrari pitted from 2nd in LMGTE, with Matt Griffin handing over to Johnny Mowlem. Jean-Karl Vernay also came in for a scheduled stop and handed over to Patrice Milesi, who regained the track at the head of the GTE class. However this lead was negated when the car was served with a one minute stop-go penalty for speeding in the pitlane.

Mowlem was also back in the pits for a new wing mirror which had become detached, losing the Englishman some ground on his rivals. There was also disaster for the pole position holders as the JMW Motorsport Ferrari spent time in the pitlane with mechanics pulling panels off to work on the car, their race over on lap54.

On lap 57 Ragues pitted in the lead Signatech Alpine to hand the car over to Nelson Panciatici and after the next set of pitstops the French driver found himself with a 90 second advantage over Simon Dolan, now at the wheel of the nr38 Jota Sport Zytek-Nissan, closely followed by Brendon Hartley in nr18 Murphy Prototype. The New Zealander soon reeled in the British driver, closing the 30 second gap by lap 74 and swept into second place.

Nick Tandy, now at the wheel of the nr77 Proton Competition Porsche had moved quickly up the field and at the end of his stint was leading the LMGTE class, 22 seconds ahead of the nr75 Prospeed Porsche of Emmanuel Collard.

In GTC the two SMP Racing Ferraris were holding a 1-2 in the class but were being closely followed by the nr79 Ecurie Ecosse BMW of Joe Twyman. It looked as if the Scottish team were heading for another podium to keep their title hopes alive when disaster struck and their race ended in a collision with the nr54 AF Corse Ferrari and both cars ended up in the barriers at Turn 12.

This left the two Russian Ferraris to fight it out for class honours with Fabio Babini getting past Luca Persiani as the race entered the final stages.

The Boutsen Ginon Racing Oreca of Alex Kapadia and Khaled Al Mudhaf was running well but had several spins as Al Mudlaf was caught out by the tricky conditions. However the Kuwaiti brought the car home in 7th in class, but was later unable to claim the 6 championship points because he hadn’t completed the required driving time.

The LMP2 class SMP Racing Oreca Nissan of Serguey Zlobin and Maurizio Mediani was running just off a podium finish in 4th place, one lap ahead of Christian Klien in the nr43 Morand Racing Morgan-Judd. The two cars negotiated the traffic in the drying conditions to claim the welcome 12 and 10 points respectively.

As the nr36 Signatech Alpine Alpine-Nissan of Nelson Panciatici crossed the line for the 82nd time the chequered flag was shown to bring the 3 Hours of Hungaroring to an end. The results mean all of the championship battles go to the final round and with Pierre Thiriet, Pierre Ragues and Nelson Panciatici tied on 73 points it will be all to play for in Le Castellet on the 28 September 2013.

Pierre Ragues commented: “Words cannot do justice to how special it felt to be standing on top of the podium today and to celebrate the first victory for Signatech-Alpine this season, and the first win for Alpine since 1978. It was a fantastic race and I am so proud to be part of this result. I am so happy with my own performance and I have been very quick all weekend.

We have worked so hard all season and showed the competitiveness of the A450 all season, so after our recent second places it is amazing to make that all important step up to the top step. For me, Nelson, Signatech-Alpine and my own sponsors Group Auto, this is a tremendous result. The weather played its part this morning in qualifying but Nelson achieved a good third place and from there we were able to make the most of the car even on a damp track at the start of the race.

I made up positions quickly and enjoyed putting in some nice overtaking manoeuvres to take the lead. From there, we just kept our focus and concentrated on the job in hand, setting fastest laps and not making any mistakes, drawing also from our pre-race work in the Ellip6 simulator. The team has performed faultlessly, as it always does, and this result is one that we will all share and remember for a long time.”