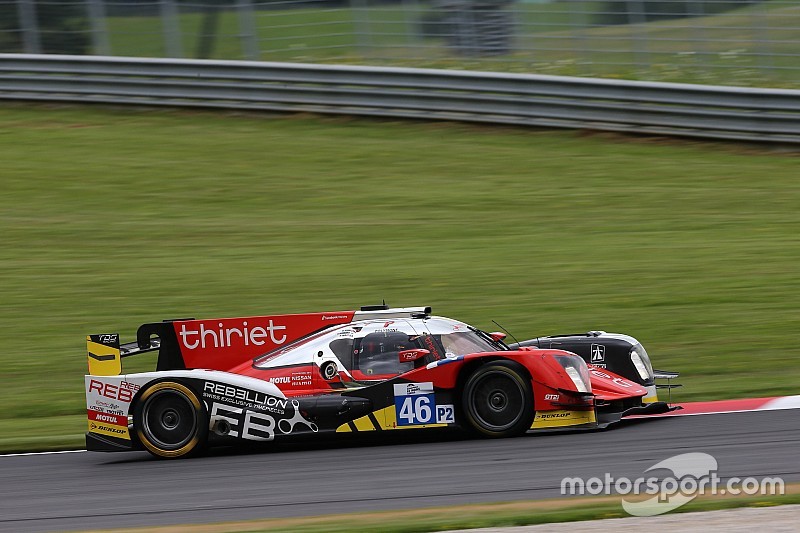 The French team took the lead after the first pitstops and never gave it up afterwards.

The #23 Panis-Barthez car, quickest in qualifying, took the early lead of the race in the hands of Timothe Buret.

He was followed by Eurasia's Tristan Gommendy by less than a second for the first half hour before taking the top spot as Buret suffered a streak of incidents.

Shortly after making contact with the Ferrari of LMGTE leader Rory Butcher and running wide, he received a drive-through for not respecting the formation of the race start. Soon afterwards, he went into the gravel and touched the wall.

The first set of pitstops saw Gommendy give up his seat to Pu Junjin, but the #33 Eurasia entry rejoined only second as he lost out to the Thiriet by TDS Oreca.

The latter team's starting driver Pierre Thiriet continued to drive after his stop and established himself in the lead as a result.

His teammate Ryo Hirakawa continued to head the field when he took over, the Japanese driver's stint including the first full-course yellow of the race.

It was caused by the #7 Villorba Corse car, driven by Roberto Lacorte, spinning out in the gravel at Turn 5.

Hirakawa extended his lead of 20 seconds over SMP Racing's Julian Leal by further 10 before being replaced by Mathias Beche.

The former IndyCar driver lost around 15 minutes after contact with LMP3 leader Marco Jacoboni and the car required repairs in the pits during the team's planned stop.

Beche was replaced by Thiriet on the team's final visit to the pits and, even though they lost some time as they were ordered to replace a damaged headlight, the Frenchman rejoined in the lead with ease.

There was another full-course yellow with 40 minutes remaining after the Harry Tincknell could not avoid a spinning car in front of him and left debris on track.

The Briton's #38 G-Drive entry recovered to third from an early pitstop due to a puncture and, thanks to the neutralisation, Tincknell could have the car repaired without losing a position.

Thiriet cruised through the remainder of the race, which had another full-course yellow due to Tracy Krohn retiring in the gravel, to cross the line first by 51 seconds.

The top five was completed by Greaves Motorsport's team of Memo Rojas, Julien Canal and Nathanael Berthon, inheriting fifth from Algarve Pro Racing, which received a drive-through penalty for crossing the white line at the pit entry.

David Droux had an impressive opening stint to establish himself in the LMP3 lead but his teammate David Hallyday failed to hold on to the position.

The two Eurointernational entries led the rest of the first hour and, even though the #12 lost a lot of time in the pits, the #11 car, driven by Marco Jacoboni, led the category until the final hour.

However, the #19 returned to the lead and the trio of Droux, Dino Lunardi and Hallyday secured the team's first ELMS of the season.

Lunardi, who took the chequered flag, was just three seconds ahead of the championship leader United Autosports car of Alex Brundle, Michael Guasch and Christian England.

JMW Motorsport's Rory Butcher, Robert Smith and Andrea Bertolini spent the majority of the race in the lead and went on to score their first victory.

Butcher started the race for the team and established a safe lead in no time.

Although Porsche driver Marco Seefried took over temporarily, Bertolini was in the lead once the German pitted.

It was Butcher eventually finishing the race, with a lead of more than a minute.

The all-Ferrari podium was followed by the championship leading Aston Martin of Andrew Howard, Darren Turner and Alex McDowall.