A well-deserved victory for JOTA Sport and a credible 4th place for Greaves Motorsport in the second round of the European Le Mans Series (ELMS) in Italy 18 May made it a great weekend for the Zytek teams.

JOTA’s Simon Dolan, Harry Tincknell and Filipe Albuquerque recorded the British team’s first ELMS win of the season with a 28 sec victory in the Imola 4 Hours at the wheel of their LMP2 Zytek Z11SN.

JOTA now lie second in the Team’s championship after two races just eight points down on the leaders despite the team’s unfortunate non-finish in the opening Silverstone race when race leader Dolan was forced off the track and into the barriers. 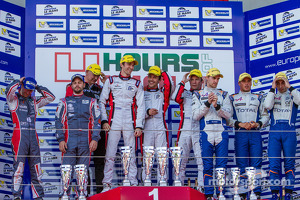 Having secured pole-position for the Silverstone opening round courtesy of Tincknell, this time it was Albuquerque who gained “pole” around the 22-corner, 3.05-mile Autodromo Internazionale Enzo e Dino Ferrari track near Bologna Italy.

Tincknell led impressively throughout his stint of the race before making a scheduled pit-stop after 45mins, Dolan taking over and resuming with a three seconds lead after the opening pit-stop phase. Dolan handed over to Albuquerque who’s stint showed incredible pace, Filipe clocking the race’s fastest lap on the two-hour mark, the “factory” Audi Sport “loanee” consistently setting the quickest laps. During the 4 hour race all three drivers put in exceptional performances to ultimately claim victory. With the Greaves drivers of Kimber-Smith and McMurray coming home 4th and the Zytek Nissan powered cars of TDS and Pegasus Racing finishing in 5th and 6th positions, it was a successful weekend.

Nick Langley Zytek’s Business Development Manager said “Congratulations to all at JOTA Sport, a stunning display from the team taking a well- earned victory and making up for the disappointment of Silverstone. It’s great to see the Zytek chassis has again demonstrated its outstanding performance and drivability.

We are now in full preparation mode for the Le Mans event where we intend to reveal details of our new ‘closed coupe’ design”.