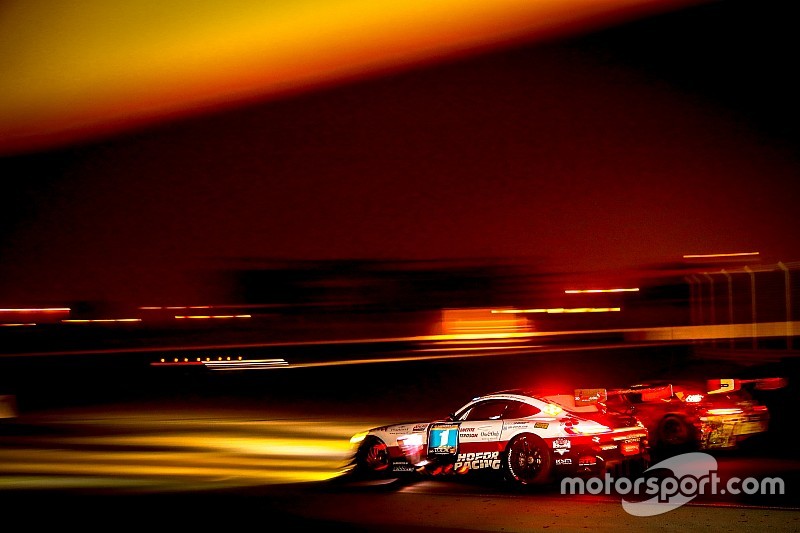 Two further AMG Customer Sport Teams finish in the top ten in the Dubai Autodrome in the desert and also score a class win with the #1 Hofor Racing Mercedes-AMG GT3.

A successful start of the 2017 motorsport season for Mercedes-AMG: with the #3 Mercedes-AMG GT3, Black Falcon comes third in the twelfth running of the Hankook 24H Dubai (12-14 January), a round of the Creventic 24H Series, and thus added another good result to its great achievements from previous years. Two further AMG Customer Sport Teams finish in the top ten in the Dubai Autodrome in the desert and also score a class win with the #1 Hofor Racing Mercedes-AMG GT3.

Dubai - In the 24-hour race at the Gulf, Black Falcon secures third place in the overall classification among a 92 cars strong field and thus added to its impressive achievements from previous years. AMG Customer Sports Team Black Falcon has always been on the podium in recent years (2011 till 2017): the team already won the Dubai 24 Hours three times, scored one second place and three third places, the achievements including the maiden 24-hour race win of a Mercedes-Benz SLS AMG GT3 in the Mercedes-AMG Customer Sports programme back in 2012.

Driving the Black Falcon Mercedes-AMG GT3 with starting number #3, Yelmer Buurman (NED) started the race on Friday at 14.00 hrs local time from fifth place on the grid. The Dutchman had a good start, but already had to come in for an unscheduled pit stop after only a few laps. Buurman and his team-mates Abdulaziz Al Faisal (KSA), Michal Broniszewski (POL), Maro Engel (GER) and Hubert Haupt (GER) quickly established contact to the front-runners again and firmly placed themselves in the top five as the race played out. The dense traffic, numerous code 60 phases and time penalties for speed infringements in the refuelling zone had no effect on the team. After 575 laps, final driver Maro Engel crossed the line to finish third.

The defending 24H Series teams’ and drivers’ champions, Hofor Racing scored another top result: the Swiss team was able to repeat its A6-Am class win in the Dubai 24-hour race from the previous year, back then still with the Mercedes-Benz SLS AMG GT3. Roland Eggimann (SUI), Christiaan Frankenhout (NED), Kenneth Heyer (GER), Chantal Kroll and Michael Kroll (both SUI) gradually worked their way up from 35th place on the grid with their new Mercedes-AMG GT3 and already reached the top ten in the ninth hour of the race. After a strong team performance, final driver Christiaan Frankenhout concluded the 24 hours in seventh place overall and in first place of the A6-Am class, an important step on the way to defending the 24H Series titles.

With its #16 Mercedes-AMG GT3 in eighth place, SPS automotive-performance rounded out the good overall result of the Mercedes-AMG Customer Sport Teams with another top ten result. With the only Mercedes-Benz SLS AMG GT3 in the field, Gravity Racing International (#22) was classified in 17th place. On the other hand, there was bad luck for HTP Motorsport with the #25 Mercedes-AMG GT3: following an accident in practice, the team was unable to take part in qualifying, had to start from the back of the grid and impressively worked its way back up into the top ten.

The efforts remained unrewarded, however, as the driver quartet with Brice Bosi (LUX), Wim de Pundert (NED), Bernd Schneider (GER) and Carsten Tilke (GER) only finished 60th due to a longer pit stop with repair works after an accident through no fault of the team. The second Mercedes-AMG GT3 run by Black Falcon with starting number #2 didn’t have luck on its side in the race either. In qualifying, Jeroen Bleekemolen (NED) shone with the fastest time (1m57.705s) and led the field from pole position during the first laps of the race. Together with team-mates Patrick Assenheimer (GER), Manuel Metzger (GER) and Khaled Al Qubaisi (UAE), he was in contention for victory until the morning hours, but then a collision with an opponent led to the early retirement. Likewise, IDEC Sport Racing had to retire its car from the race after 216 laps.

Maro Engel, Black Falcon Mercedes-AMG GT3 #3: “Many thanks to the entire Black Falcon team. All the drivers and the Mercedes-AMG GT3 had an excellent pace. Unfortunately, we lacked that little bit of luck for victory. We had many code 60 neutralisations that were called just after we had made our pit stops and we lost a lot of time as a result, but not by our own fault. However, third place is a very good start of the new year. We are looking forward to the upcoming races.”

Christiaan Frankenhout, Hofor Racing Mercedes-AMG GT3 #1: “Seventh place overall and victory in our class is a great start for our mission of defending the 24H Series titles. We ran our new Mercedes-AMG GT3 for the first time in a race and we coped well straight away. Fortunately, we only had two or three little moments of contact and apart from that, we were able to drive flawless laps and put in good pit stops. That is what eventually gets you up front, even from 35th place on the grid. Anyway, we can be very happy with the result.”

Jochen Bitzer, Head of Mercedes-AMG Customer Sports: “The season opener in Dubai was a very successful one with the overall result of the Mercedes-AMG Customer Sport Teams with three top ten classifications. Of course, the podium finish for Black Falcon and the class win for Hofor Racing are making us particularly happy. Even though we didn’t have luck fully on our side for the season opener, we have shown that our Mercedes-AMG GT3 is a contender for victories in its second season as well. Our customer sport teams have shown a great performance and a highly competitive spirit. My respect also for HTP Motorsport for never giving up and still being able to finish the race in spite of some setbacks. I am looking forward to another exciting season of GT3 racing.”

* Excerpt, subject to confirmation by the organiser