Action aplenty in the opening hours of the Nurburgring 24 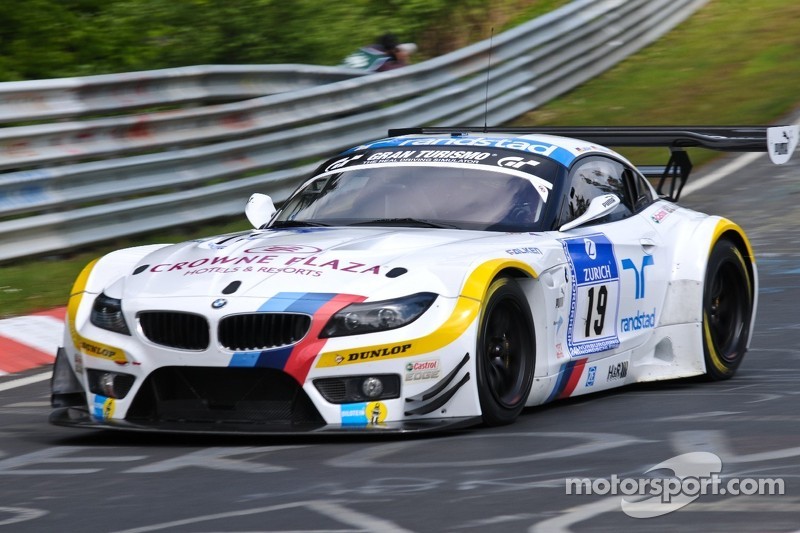 The pole sitting #19 Schubert Motorsport BMW leads the 2012 Nurburgring 24 Hours with almost two hours of the race run. The Jorg Muller/Dirk Muller/Uwe Alzen/Dirk Adorf is out of sequence with some of the leading cars, though, as it was one of many afflicted with punctures in the early stages of the race and had to make a tire-changing pitstop early. 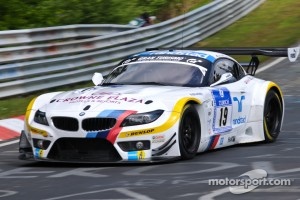 There were more serious consequences for the third-place qualifier, the #15 Black Falcon Mercedes SLS AMF of Sean Edwards/Jeroen Bleekemolen/Manuel Metzger/Ralf Schall, whose tyre exploded on the very high-speed Dottinger Hohe straight, pitching the car into the barrier. The Mercedes is one of several cars now permanently retired from the race – others include the #206 BMW 325i with a heavy front-end impact and #232 Porsche Cayman, which crashed when braking too hard for the yellow-flag zone around the Mercedes crash. Prospects look extremely shaky for the #90 Haribo Corvette, which was another puncture victim. Its battery was damaged by the flailing tyre and driver Tommy Milner is currently attempting repairs at the side of the track.

The #19 pole sitting BMW's starting driver Jorg Muller pulled out a big lead over the first two laps, making a significantly better start than second-place starter Chris Mamerow in the #26 Audi R8, who lost several places. After the first round of pitstops, though, the #19 BMW has the privateer #29 Marc VDS BMW (also out of sequence due to an early puncture) less than a second behind, with the #65 Hankook Team Heico Mercedes SLS in third, driven by the all-pro lineup of Kenneth Heyer/Bernd Schneider/Lance David Arnold/Alex Margaritis. 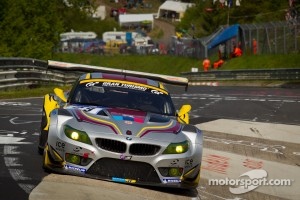 Aston Martin has had a very difficult start to the race, with the #006 Vantage V12 stranded out on track after suffering one of the many early punctures. It's having a wheel replaced on-site, but will be several laps down when it eventually gets going again. Things look even worse for the #007 car, which has been in the garage with a transmission problem since the early laps.

As we wrote this, the #19 and #29 BMWs had just made their scheduled stops, handing the lead two positions back to the #65 and #66 Heico Mercedes. The second works BMW, the #20 Claudia Huertgen/Dominik Schwager/Nico Bastian/Dirk Adorf entry, was right with them, followed closely behind by the first Audi in the running, the Phoenix Racing #2 car driven by Marcel Fassler, Christopher Mies, Rene Rast and Frank Stippler.

Only at The Ring: Unique cars competing in the 24 Hours

Audi and Mercedes pushing BMW at the Ring