Another successful race in the books: review 2013 Dunlop 24H Dubai

DUBAI – The eighth running of the Dunlop 24H DUBAI, the first international endurance race of the year for GTs, touring cars and 24H-Specials, was a great success.

Throughout the 24 hours, there were no less than 29 lead changes and nine different cars took turns in the lead of the 81 car field. 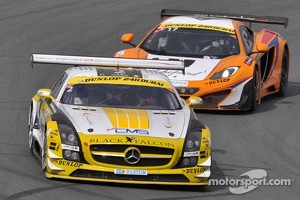 “Together, we have enjoyed some great racing and a fantastic event once again,” says Gerrie Willems on behalf of Dutch agency CREVENTIC, promoters and organisers of the Dunlop 24H DUBAI in co-operation with DNRT (Dutch National Racing Team) and DAMC (Dubai Autodrome Motorsport Club).

“The fact that we had so many different cars in the lead, including some cars from the amateur class, is proof that our regulations worked very well.

Moreover, having a Mercedes-Benz SLS AMG, a Ferrari 458 Italia and an Aston Martin Vantage GT3 on the podium and also cars like the Porsche 997 GT3 R, the Lamborghini Gallardo LP600+ and the McLaren MP4-12C in the top ten is the dream of every sports car fan.”

But as usual, and in the best tradition of endurance racing, the Dunlop 24H DUBAI was not just about the impressive GT3 machinery in the top class.

There was good racing in all the other categories, too and some of the battles for class victories went right down to the wire. “This mix of cars, amateurs and professionals reflects the true spirit of the Dunlop 24H DUBAI,” says Willems.

“Compact cars like Renault Clios, MINIs and the Citroën C2 are just as welcome as the powerful sports cars. Teams are helping each other to make it to the finish and the atmosphere in the pits and the paddock was again very good.

This is also a perfect example of the DNRT motor racing philosophy, which has been spread out internationally with CREVENTIC over the years.”

ACTUAE also largely contributed to the success of the event, together with its Dutch counterpart KNAF.

The Dunlop 24H DUBAI was widely covered in the media, with over 16 hours of live broadcasts on Motors TV and numerous other channels worldwide.

Over 100 journalists attended the race, representing online and print publications from all over the world. A wide audience also listened to the commentary from the expert team of Radio Show Limited, well-known from Radio Le Mans.

Like in previous years, money was raised to support the Dutch Cancer Foundation (KWF), a charity to which many competitors made a donation.

Mücke pleased with third at the 24 hours of Dubai

A steep but valuable learning experience for the RAM Racing team