Autodrome geared up for Dubai 24 Hours 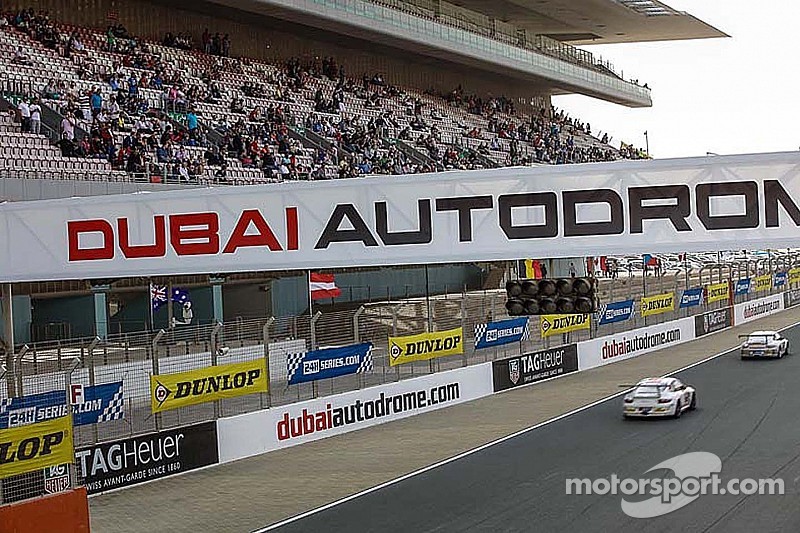 Dubai Autodrome is braced to host the 2015 Hankook 24 Hours of Dubai, the tenth edition of the race, this week with the venue's paddock packed with containers filled to the brim with endurance race cars and all the equipment required for this epic event which kicks off with track action on Wednesday, 7 January.

On Friday, January 9,  for the start at 14:00pm there will be 90 cars on the grid, with over 400 drivers on duty over the 24 hour period, making this edition one of the largest in the ten year history of the race.

The big news ahead of what is the international circuit racing season opener, the FIA granted the Hankook 24H Series, organised by Creventic in co-operation with the Dutch National Racing Team (DNRT), full international status with Dubai the opening round of the six round endurance series.

"We are delighted with this news, because it gives another boost to our rapidly growing series," declared Gerrie Willems on behalf of Creventic when FIA made the announcement late last year.

"We would like to express our thanks to everyone involved in this process, especially to the Dutch national federation KNAF, who have been instrumental in this next step in our development."

The event, which is now a mainstay on Dubai's prestigious international sporting calendar, has come a long way since it's inception back in 2005, when the field was largely made up of amateur and semi-professional teams. Over the years the event has grown in status and as a result the grid now consists of predominantly professional teams with works affiliation or factory backing.

The race will receive massive media coverage, with a particularly impressive live TV schedule which will include coverage of practice sessions, qualifying and the 24 hours live broadcast of the race itself on Motors TV and live streaming on various websites including You Tube.

"Of course, this is another great step forward for our race," explained Willems. "Motors TV has been a very loyal partner of our events over the years and we are very glad that, next to our online coverage, we can now offer another excellent way to follow the entire race for all those motorsport fans who can't be in Dubai for the race."

State-of-the-art broadcast equipment, including drones to generate spectacular aerial shots, will be used to capture the action throughout the Hankook 24H Dubai, along with on-board cameras in selected cars to allow the viewers to follow the action from a driver's perspective.

The Dubai Autodrome paddock will be a hive of activity with a myriad of off-track entertainment and attractions for the whole family, with free entry to the circuit -- including grandstands and paddock area -- free invites can be downloaded from www.dubaiautodrome.com

Qualifying takes place on Thursday, 8 January, between 15:00pm and 17:30pm, with the race set to be flagged off at 14:00pm on Friday, with the chequered flag waving (to bring proceedings to an end) at 14:00pm on Saturday, followed by the podium ceremony.

UAE-based teams and drivers hoping for podiums in Dubai