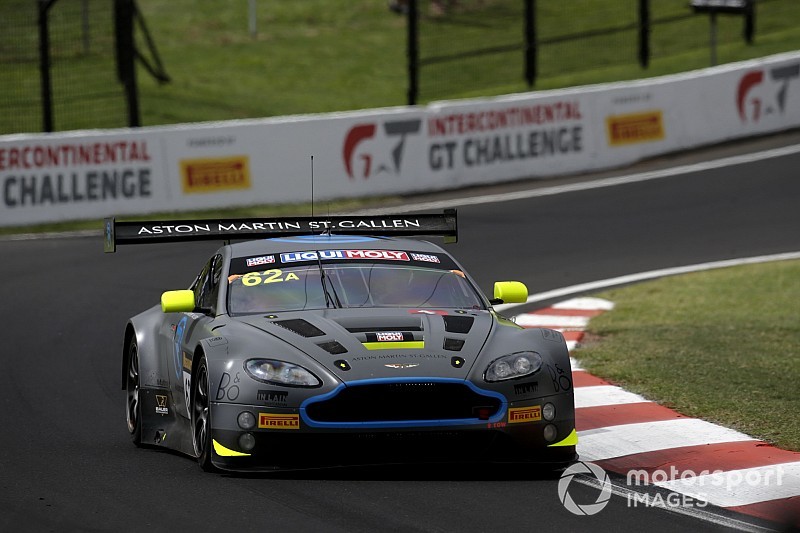 The #62 R-Motorsport Aston Martin will run last in the Top 10 Shootout for the Bathurst 12 Hour thanks to a late Jake Dennis lap in regular qualifying.

Dennis jumped to the top of a standings with a 2m02.412s right at the flag, leap-frogging a trio of Mercedes to finish the session on top.

That means he'll run last when the first five rows of the grid are determined by a single-lap dash later this evening.

The car won't, however, be eligible for pole, having picked up a two-spot grid penalty for speeding in pitlane earlier in qualifying.

All three of those cars improved on their final runs, which dropped Yelmer Buurman in the Team Nineteen Mercedes – who'd been quickest with a couple of minutes to go – down to fourth.

Matt Campbell was best of the Porsche drivers in fifth in the #912 EBM entry, ahead of Steve Kane who was a late improver in the #107 M-Sport Bentley.

It was a pair of Audis in seventh and eighth, Kelvin van der Linde in the #22 edging Christopher Haase in the #2, while Raffaele Marciello (#999 GuppeM Mercedes) and Alex Imperatori (#18 KCMG Nissan) were the last two to book a Shootout berth.

The unlucky entry on the bubble was the #108 M-Sport Bentley, Vincent Abril falling 0.06s short of the magic 10th spot.

The unlucky entry on the bubble was the #108 M-Sport Bentley, Vincent Abril falling 0.06s short of the magic 10th spot.

The pre-race favourite Triple Eight Mercedes was well off the pace too, Jamie Whincup down in 19th in the all-Class A portion of qualifying and set to start 20th on combined times.

The #27 HubAuto Ferrari had been third quickest in the first segment of qualifying, but only completed a handful of laps, all well off the pace, in the session that determined the Top 10 Shootout spots thanks to a fuel issue.

Thanks to the earlier time the car will start the race from 19th.

Anton De Pasquale caused a stir in the first part of qualifying by twice breaking the 2m05s lap time limit for the Invitational class in the MARC V8, the best of which was an impressive 2m04.258s.

Between those times being scrubbed, and that entry having a two-place grid penalty after Paul Tracy sped in pitlane, the #20 MARC entry ended up on the class pole instead.

Ben Barker led the way in Class B, putting the Grove Racing Porsche on pole, while Dean Lillie took pole in Class C for the #48 M Motorsport KTM.