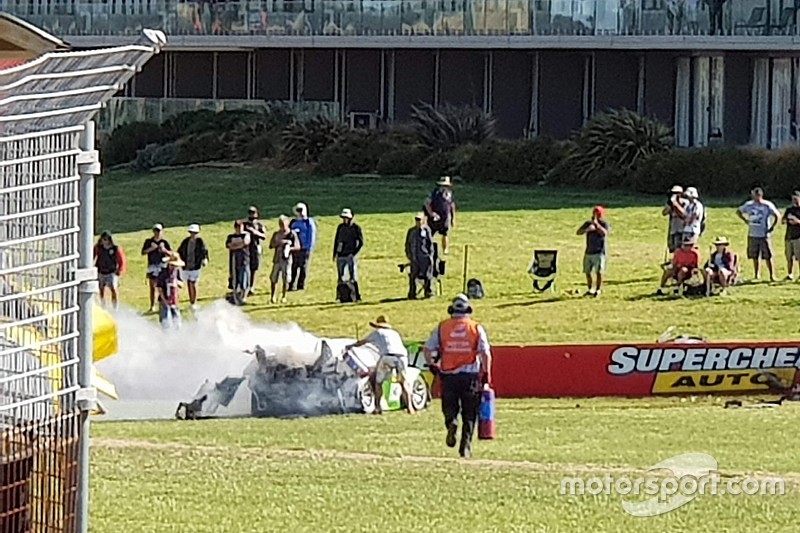 The man who jumped the fence to intervene after Tim Pappas' fiery Bathurst 12 Hour crash has spoken for the first time.

Trevor Jackson says he took action when marshals were too slow to respond to the burning car, the spectator grabbing an extinguisher from a marshal post and attempting to douse the back of the Black Swan Porsche.

When his extinguisher failed a second spectator also intervened, the pair then retreating when official safety crews arrived.

News of the brave intervention was first broken by Motorsport.com yesterday evening, Supercars Events confirming later that an investigation into the situation is ongoing.

Speaking for the first time, Jackson says he fully understands the safety implications of his actions – but felt he had no option but to get over the fence and get involved.

"I saw the ball of fire, but I thought no problem, the marshals are there, four or five fire extinguishers, everything should be fine," he told Motorsport.com. "So I just sat back with everyone else.

"[The marshals] didn't seem to do anything. They just looked at it. I thought 'the fire truck will come', because it was quickly on the scene when the Audi crashed earlier.

"I waited a minute, and we were all yelling that there was a fire. The marshal was off to the side so maybe he couldn't see it, but even the people on the other side of the track, they were screaming. The truck wasn't coming.

"I had to jump the fence. I had to do something. I couldn't see a guy get burnt alive.

"I jumped over the fence, but I was always looking if someone was coming. I knew it was a safety issue. I saw the cars were slowing down, I saw the other marshal had a flag out.

"I got the extinguisher, but the hose blew up in my hand. I then did the best I could. Another mate who was next to me grabbed another extinguisher and that one worked better. Then the fire truck arrived.

"Then the head marshal came and saw me, and I thought he was going to go crook at me... which I was prepared for. I said 'mate, your fire extinguisher blew up in my hand' and he said 'we test the bottles, we don't test the hoses'. I said 'that's going to cost someone their life'.

There's been a mixed reaction to the intervention online, with some social media users praising Jackon's quick thinking, and others labelling his involvement as reckless.

The man himself, however, is comfortable with his decision.

"Yes, we were on the track," he said. "And I would never normally jump on the track. But I was aware they were slowing down the traffic, and nothing else was happening.

"We waited. We waited, we were screaming. I couldn't stand there and watch the fire coming inside the car."

Pappas was airlifted to hospital in Sydney, where he was diagnosed with fracture to his right arm and pelvis. 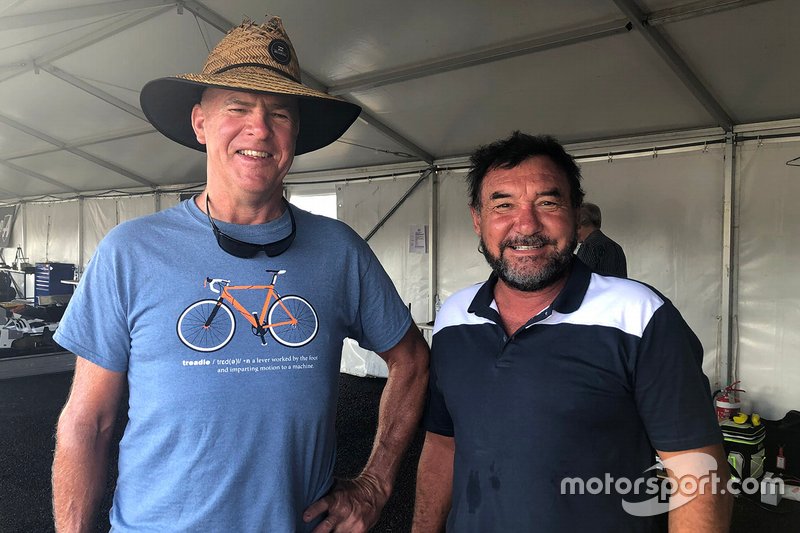 Bathurst 12 Hour to be streamed for free on Motorsport.tv