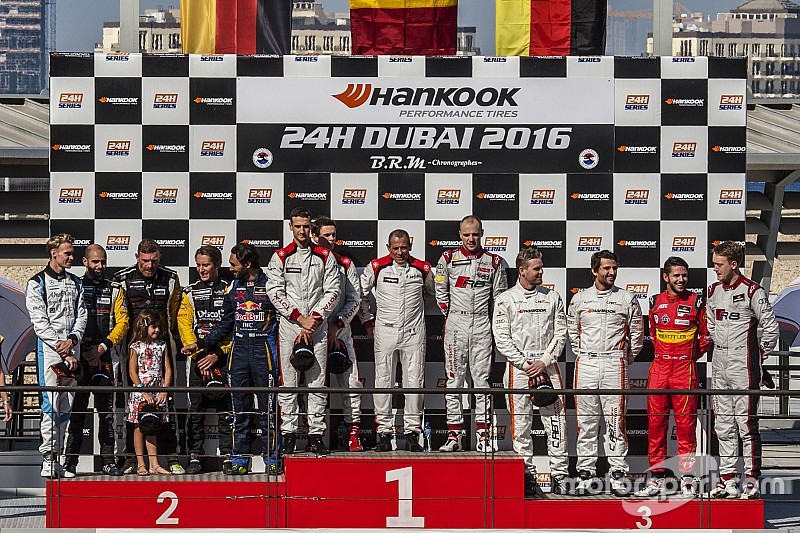 Dubai  – Finally, German car manufacturer Audi can add victory in the Hankook 24H Dubai to its already impressive list of achievements in the world’s major endurance races. With their Audi R8 LMS (#19), run by Belgian Audi Club Team WRT, drivers Alain Ferté, Michael Meadows, Stuart Leonard and Laurens Vanthoor racked up a total of 588 laps of the 5.399 kilometres long Dubai Autodrome, equalling a total of 3,174.612 kilometres. Belgian driver Laurens Vanthoor drove the winning car across the finish line. “A fantastic success for our team, for Audi and for ourselves,” he commented. “With so many cars on track, it was a difficult race, probably the most difficult I have ever driven.

But that is making the success feel even better.” After impressive progress from last place on the grid, the Black Falcon team finished second with its Mercedes-Benz SLS AMG GT3 (#16, Abdulaziz Al Faisal/Oliver Webb/Adam Christodoulou/Oliver Morley/Frank Montecalvo), five laps down on the winners. Another three laps down, the C. ABT Racing Audi R8 LMS (#4, Christer Jöns/Andreas Weishaupt/Isaac Tutumlu Lopez/Matias Henkola/Daniel Abt) finished third.

With a record field of 98 cars on track, there were numerous incidents, particularly during the first half of the race. Some of the front-running teams were also affected. Former Dubai race winners Black Falcon saw both its Abu Dhabi Racing Black Falcon Mercedes-AMG GT3 (#2, Khaled Al Qubaisi/Hubert Haupt/Jeroen Bleekemolen/Maro Engel/Indy Dontje) and its Black Falcon-Mercedes-AMG GT3 (#3, Abdulaziz Al Faisal/Hubert Haupt/Yelmer Buurman/Bernd Schneider/Michal Broniszewski) retired with damage incurred in separate collisions.

The Scuderia Praha Ferrari 458 Italia GT3 (#11, Jiri Pisarik/Peter Kox/Matteo Malucelli/Matteo Cressoni) ran in the top three for most of the first half of the race and led for 76 laps, but retired in the tenth hour due to a collision with the Primus Racing Ginetta G55 (#51, Thomas Martinsson/Johan Rosen/Marcus Fluch/Peter Larsen/Magnus Holmström). That handed the lead to the Land Motorsport Audi (#28, Marc Basseng/Christopher Mies/Carsten Tilke/Connor de Phillippi) that led for over 100 laps before losing some time due to running short on fuel early on Saturday morning.

With the Audi Sport Team WRT Audi now in the lead, the drivers motored on to an undisputed victory, the first victory for Audi and the maiden overall win for a Belgian team in Dubai. There was plenty of drama in the battle for the remaining positions, however. With two and a half hours remaining, the Land Motorsport Audi retired with gearbox failure. A total number of 193 laps in the lead and the fastest race lap time of 1:58.712 minutes, set by Christopher Mies on lap three, were the only tangible results for the team.

Victory for the Audi R8 LMS in Dubai