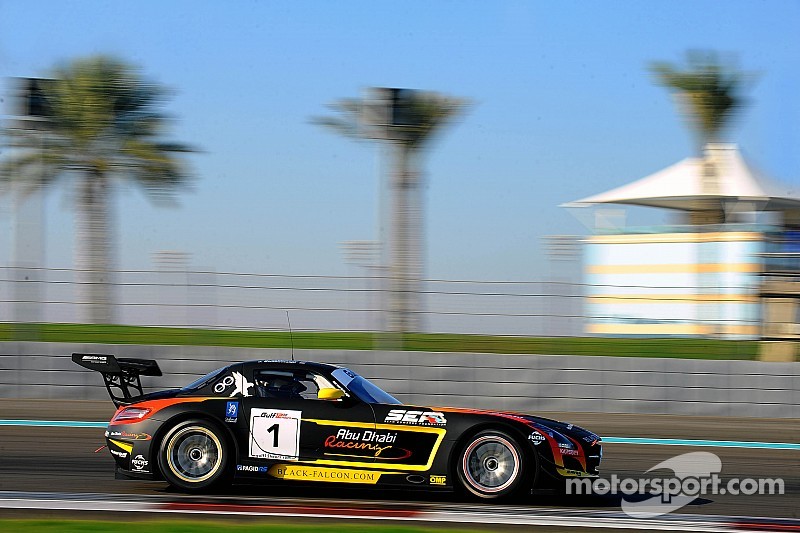 Team Black Falcon will start its 2015 motorsport chapter by lining up four cars on the Dubai 24 Hours grid at the Dubai Autodrome this coming weekend.

The team is aiming for an outright victory with its two Mercedes SLS AMG GT3 racecars, both of which will face very tough competition in the premier A6 category.

Fresh off their Pro-Am class victory at the Gulf 12 Hours, Abdulaziz Turki AlFaisal and Hubert Haupt return to the racing seat this week; the pair will be joined by Yelmer Buurman and Oliver Webb in the Black Falcon #2 Mercedes. Having competed on the SLS AMG GT3 at the 2014 Spa 24 Hours, Webb brings a wealth of 24-hour race experience to the team and is expected to be right on the pace, much like his teammate and Black Falcon regular Yelmer Buurman.

Alongside the two Mercedes SLS AMG GT3 racecars, Team Black Falcon will have two brand new 2015 model spec Porsche 911 GT3 Cup cars in the Dubai 24 Hours, and the team looks forward to race both cars for the first time after a successful 2014 VLN season, in which an SP7 class victory was achieved on several occasions with the older 997-generation Porsche 911.

Regular Black Falcon drivers join the team in Dubai: Porsche #25 starts with V6 race winners and teammates, “Gerwin” and Manuel Metzger, who are stepping up from the team’s ultra successful 911 Carrera race cars to the more powerful 911 Cup car for the first time. Burkard Kaiser, who raced in the 2014 edition of the Dubai 24 Hours on the 911 Cup, and long-time Black Falcon driver Christian Raubach, who’s making a comeback after some time away from racing, join Gerwin and Metzger in the #25 car.

Black Falcon Porsche #26 will be shared among five drivers: the super fast Dane Anders Fjordbach, who raced at the Dubai event last year and finished the season with a podium at the Blancpain Endurance Series in the SLS AMG, and the brother of Abdulaziz Turki AlFaisal, Saud Turki AlFaisal, who, after a very successful race with Black Falcon in the 2014 Spa 24 Hours, looks to expand his GT racing experience in the 911 Cup car. Completing the driver line-up in the #26 Porsche will be Kieta Sawa from Japan, 2014 SP7 race winner and very experienced Cup car driver Andreas Weißhaupt and renowned Porsche racer Patrick Huisman.

Similar to the Black Falcon Mercedes teams that are up against 25 cars in the A6 category, the two Black Falcon Porsches want to secure a class victory and overcome 16 competitors in the Porsche Cup Class.