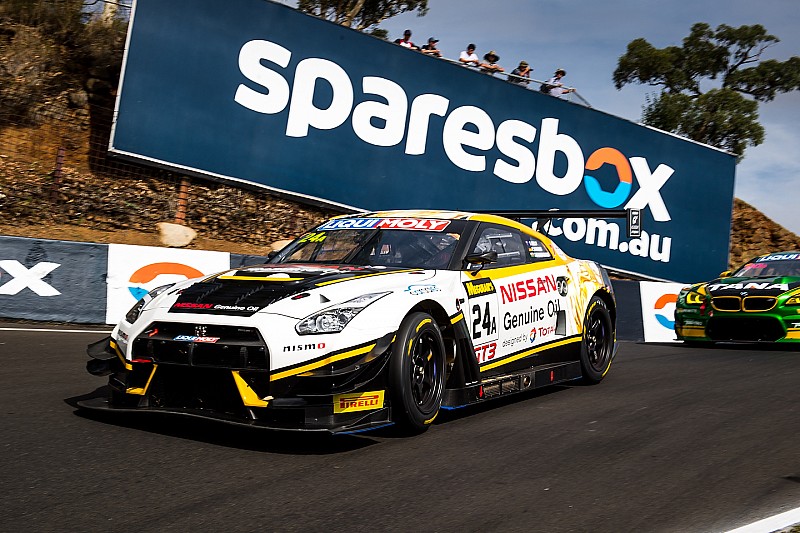 Nissan has taken the crucial step of getting its crashed GT-R on a chassis jig, as it looks to repair the #24 entry before tomorrow’s Bathurst 12 Hour qualifying session.

Former Bathurst 12 Hour winner Florian Strauss went into the wall during today’s second all-in practice session, the factory Nissan GT-R sustaining front-end damage. The German was able to nurse the car back to the pits, but it quickly emerged that there was sufficient chassis damage to threaten its ongoing participation in the event.

While the car will definitely miss the final practice of the day, there is hopes it could be running before tomorrow’s practice and qualifying sessions thanks to a chassis jig that was sourced from a local mechanic.

It’s not the first time the GT-R has been on the jig, the same piece of equipment having been used by the team two years ago.

“In 2015 we had an accident, and we ended up working all night in a local garage in Bathurst,” team manager Bob Neville told Motorsport.com.

“The very same guy has unfortunately sold the garage, but he kept the jig – so the jig is here, and it’s just gone on the car.

“That’s a big break. Now we need to see when we start pulling it, whether we can pull it straight. Nobody can give you the answer just yet.”

The team is expecting to know whether the car can be repaired, or whether it will need to be withdrawn, this evening.

Should the car get going again, Neville is confident that a result can be salvaged, thanks to the strong form being shown by the #23 GT-R through the first two practice sessions.

“There’s good and bad news. [The crash] is terribly disappointing, but it’s great to know that the car is still nicely balanced and suiting the circuit,” he said.

“Car #23 has been going very nicely, so that’s really great news. If we can get car #24 back together, we’ll be back where we were.”

Jann Mardenborough, who is one of the car’s three drivers along with Strauss and Todd Kelly, agreed that utilising the #23 will be clawing back the lost track time tomorrow.

“We’ve got separate engineers, and now, with this, if we do get the car fixed we’ll need to talk to them to help us for qualifying.

“We’re qualifying at 10:40 tomorrow morning, and we can’t go in there blind. So we need to do a lot talking with the other guys.”