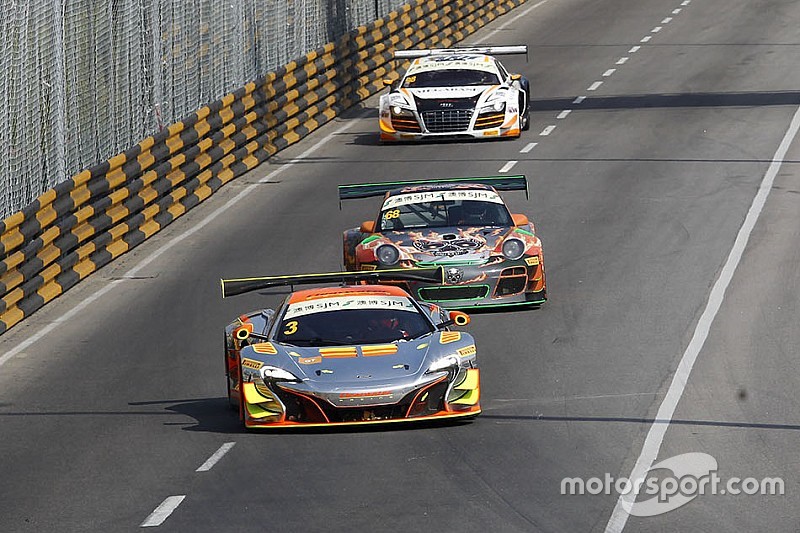 The first day of action at the 2015 Sepang 12 Hours saw two official free practice sessions, both partly run in wet conditions. The final minutes of each practice session proved to be the quickest, with James Calado setting the fastest time in the #1 Clearwater Racing Ferrari.

Two two-hour free practice sessions gave the drivers and teams taking part in the 2015 Sepang 12 Hours ample time to understand that the weather conditions at the Sepang International Circuit are changeable to say the least. The 5,543 km was hit by showers just before the first free practice session started, which meant that the drivers not only had to deal with driving into the night, but also had to cope with a wet track.

It took some time for a dry line to form, and it was only when there was less than one hour to go that the 2'05 barrier was broken for the first time. With his lap of 2'04.385, Christopher Mies in the #150 Belgian Audi Club Team WRT Audi looked set to claim the fastest time in FP1, but Carlo Van Dam took his #11 Singha Motorsport Team Ferrari by the scruff of its neck and set a scorching 2'03.563, a full two tenths of a second quicker than last year's fastest race lap.

Behind Mies, 2014 Sepang winner Gianmaria Bruni set the third-fastest time of the first free practice, at the wheel of the #1 Clearwater Racing Ferrari. The fastest time in the GTC class was set by the #69 Team Fydis Aylezo Lamborghini, while the #602 Jim Hunter Motorsport Subaru was on top in the Touring Car division.

With slightly cooler temperatures for the second free practice session, there was a big chance that the lap times of FP1 would be improved. Both Nobuteru Taniguchi in the #35 Team AAI - HubAuto Mercedes and Dominic Ang in the #27 Naza Nexus Ferrari dove into the 2'04, but then the Malaysian weather gods decided that they would shed some more rain over the Sepang Circuit, apparently ruining the possibility of any further improvements.

But forty minutes before the end of the session, the track had dried enough to see James Calado set an impressive 2'03.512 with the #1 Clearwater Racing Ferrari, just edging under Carlo Van Dam's time from the first free practice session. Other teams and drivers did not seem to bother to go and set a quick lap time, although Andrea Caldarelli improved the #55 FFF Racing Team by ACM McLaren's lap time and finished up in fourth. At the wheel of the #69 Team Fydis Aylezo Lamborghini Mitchell Gilbert was again impressive, beating the second car in GTC by almost five seconds.

Tomorrow's action at the Sepang International Circuit starts at 11.00 (UTC+8), with the third free practice session. The grid for the 2015 edition of the Asian endurance classic will be set in the afternoon.