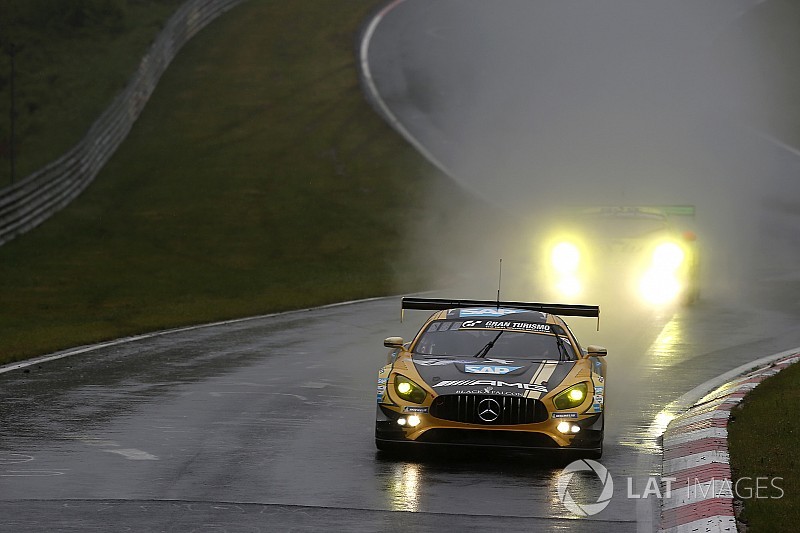 Black Falcon Mercedes driver Adam Christodoulou admits he feels "a bit robbed" after losing the Nurburgring 24 Hours in a 90-minute shootout after a fog-induced stoppage.

Christodoulou was passed for the lead by Frederic Makowiecki's Manthey Porsche on the third lap of green flag running after the race had been stopped with three hours to go amid worsening visibility.

Makowiecki managed to go around the outside of the #4 Mercedes AMG-GT3 at Turns 1 and 2 of the Grand Prix loop, and Christodoulou half-spun as the two made light contact on exit.

The Briton caught back up again later on the lap, but gave up the chase after he pranged the barriers at Galgenkopf, an incident that bent his steering and left him trailing by 26 seconds at the finish.

Afterwards, Christodoulou said the fact that the #912 Porsche was put back on the same lap as the #4 Mercedes for the restart meant he was always likely to struggle to hold off Makowiecki.

"I think everyone was a bit confused at how it would turn out," he told Motorsport.com. "A small part of me feels like we were robbed a little bit from the red flag.

"We made no mistakes all race, no penalties, and this is what got us our advantage before the red flag.

"We had a nice margin of two and a half minutes, we thought it would be plain sailing all the way home. But the weather took a turn for the worse, and the race got stopped.

"The pressure was on; we were going into it in first and it was ours to lose. The Porsche had been super-strong all weekend in the wet and dry, we knew they would be hard to beat.

"The first two laps I held him [Makowiecki] off, but he was just too quick. I thought I’d send him around the outside at Turn 1 but he cut back and there was a little bit of contact and I half-spun.

"I kept it going and put the pressure on, he started cracking one or two places. He overshot the Karussell and I was thinking ‘I just need to keep the pressure on’.

"I was pushing at the limit and beyond, ended up making contact with the barriers. I wanted to win the thing so much, but in the end he was too quick."

The stoppage allowed the Manthey team get back into the race after it lost ground at the very start with a puncture, and then lost over three minutes serving a penalty for not respecting a slow zone.

Makowiecki said that his teammates in the winning car - Nick Tandy, Richard Lietz and Patrick Pilet - would have been happy for the Frenchman to crash in pursuit of victory, but not to finish second.

"They [my teammates] made it clear to me that they wouldn't be disappointed if I threw the car away," said Makowiecki. "But they also said, 'if you come back second, you'd better not show up here!'

"Definitely we got the chance with the red flag to reset the race, and when you have this opportunity you can’t leave it. You don't get the chance to win the Nurburgring 24 Hours every year."

Kuno Wittmer takes 23rd place in 24 Hours of the Nürburgring