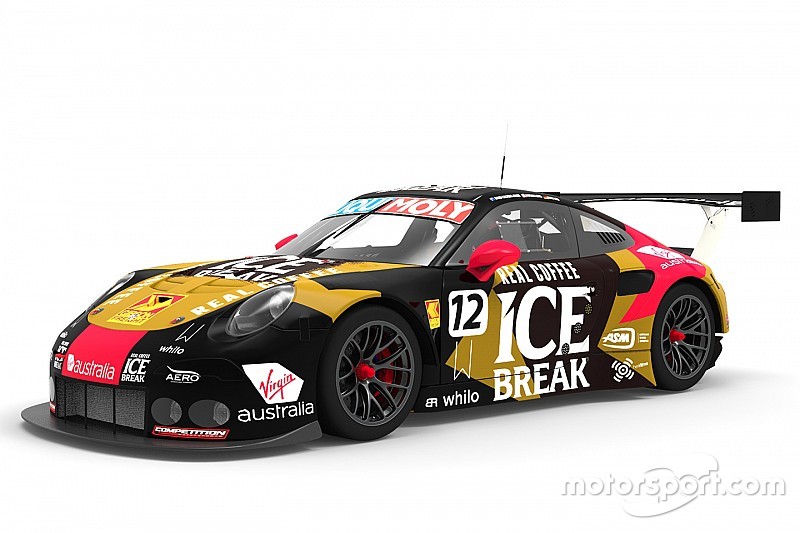 US-based Porsche squad Competition Motorsports has unveiled its Bathurst livery ahead of next month’s 12 Hour.

The team will make the long trip from LA to Bathurst for the 2017-running of the Bathurst 12 Hour, fielding a Pro-Am Porsche 911 GT3 R for factory-backed drivers Marc Lieb, Patrick Long, and US-based Australian David Calvert-Jones. The car will be run in conjunction with Australian team McElrea Racing.

As was the case in 2015 when Long, Calvert-Jones, and Chris Pither raced a Competition Porsche at Bathurst, the car will be backed by iced coffee maker Ice Break. And it has now been confirmed that airline Virgin Australia – the major series sponsor of Supercars – will provide minor backing as well.

“Constant innovation is at the heart of everything Virgin Australia does and we see that as a perfect fit for Competition Motorsports and our Bathurst 12 Hour campaign,” said Calvert-Jones.

“We are absolutely delighted to welcome Virgin Australia, who alongside leading Australian beverage brand Ice Break Iced Coffee, have complimented the team greatly.”

While Calvert-Jones and Long both have 12 Hour experience, it will be reigning Le Mans winner Marc Lieb’s first hit-out at the fast-growing endurance race. The German, who for this season has been shunted out of Porsche’s LMP1 setup and into a customer programme role, does know his way around Mount Panorama, though, having raced a Tekno Commodore at the Bathurst 1000 back in 2013.