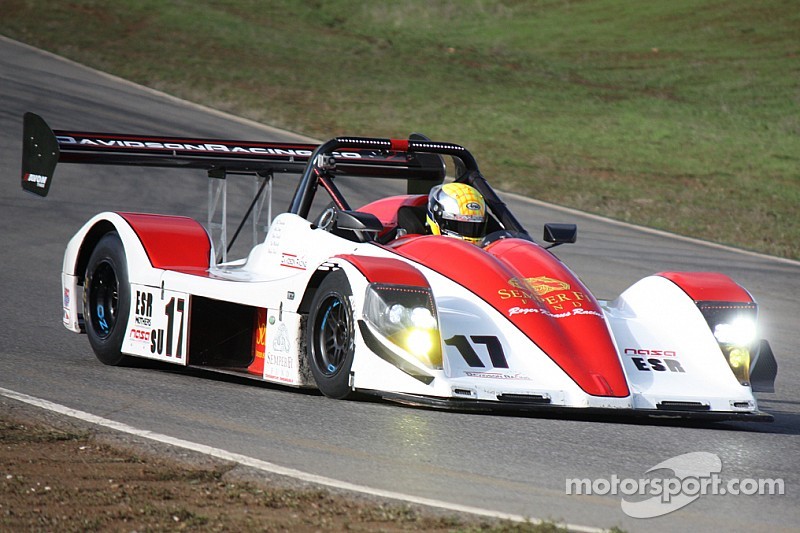 The 25 Hours of Thunderhill presented by Hawk Performance and sanctioned by the National Auto Sport Association (NASA) was won today by the Davidson Racing Norma at Thunderhill Raceway in Willows, Calif.

The No. 17 Davidson Racing Norma driven by Brian Frisselle, Randy Pobst, Alex Lloyd and Kyle Marcelli took the overall win and class honors in ESR. The team nursed the Norma to the finish line with engine and transmission issues to give team owner Bob Davidson his first Thunderhill win in four years of trying.

"It has been a few years of hard work trying to win this race," Bob Davidson, Davidson Racing team owner said. "We felt really good coming into the race this year. We have a great crew and a great line-up of drivers. The Norma has been a good car for us for a couple of years. It really came into its own this year and we had lady luck on our side."

"I am so happy for Bob," Brian Frisselle, driver, said. "He really deserves this victory. I don't know if there is a team owner in this whole paddock that is more passionate about the 25 Hours of Thunderhill than Bob. We have been hard at it for four years trying to win this for him. Bob has a lot of hard work into this project. We had some engine trouble at the end so we were a little worried. We were able to put Bob in at the end and let him bring the Norma across the finish line to take the checker so it was perfect."

In ES the No. 00 Award Motorsport/Ehret Family Winery Porsche led from the beginning of the 25 hours. The team, not used to settling for class honors, pursued the leading Norma all race. The pace of the Norma could not be matched by the endurance based Porsche which finished one lap down to the winning Davidson entry.

"We are happy with our second place overall finish considering that we have a GT going up against a prototype," Anthony Ward, driver/owner said. "Bob and his team got their prototype to live for 25 hours and had the pace to win it. Congratulations to him. Winning the ES Class is a great accomplishment. We gave it 100%. We really had nothing go wrong."

The E0 Class battle went right into the morning hours. The No. 31 Hankook Tires/El Diablo Motorsports BMW took the lead at 9 a.m. and never looked back. The No. 33 CA Sport/Skullcandy/Team Nissan 370Z led through the early evening and into sun rise. The 370Z was just built last week and didn't turn a wheel on the race track until Saturday morning. The delta at the finish - just five laps. The EO winning BMW was driven by Lance Boicelli, Scott Smith, Dale Sievwright and William Brinkop.

"This year the competition was pretty stiff," Scott Smith, driver, said. "We knew in the past that we had some mechanical issues so we really put in a lot of work preparing for the race. That work paid dividends. We had some minor problems, but overall we had a great race. We had a nut back out of one of the control arms and it corded the right front tire. We tightened everything up and got the car back out.

The E1 Class battle was won by the No. 67 BMW of Sparta Evo Brakes/Maxxis Tire/Bullet Performance. The Bullet team battled with fellow BMW runners No. 95 Grip Racing and took the win by three laps of Thunderhill. The drivers were Brett Strom, Mickey Miller, Ralph Warren and Robert Green.

"It was unbelievable," Mickey Miller, driver, said. "It was 25 hours of no problems with our BMW. We put gas in it, changed tires, added some oil and changed drivers. It was a perfect race. Other than a little fatigue we had no problems. I have done this race 11 times and I have never had a run like this one. Great win."

The E2 Class victory was taken by the Team RDR and their Mazda RX-8. The team made up of Dennis Holloway, Joel Miller and Lee Papageorge covered 576 laps on the way to their second win in as many years.

"It has been a long time coming," Dennis Holloway, driver/owner, said. "This was pretty uneventful. We only had one penalty because we ran out of gas and had to pit under yellow. It went as smooth as could be for the 25. All of our drivers, Jim Holloway, Lee Papageorge, Joel Miller and myself knocked it out of the park. It all worked in our favor this weekend. A nice team win."

The E3 battle was won by the #23 RJ Racing Mazda Miata for the second year in a row. The team fought the #07 New York Rock Exchange Acura Integra team for a 40-second margin of victory at the drop of the checkered flag. The E3 winning Miata was driven by Gary Brown, John Gibson, Rob Gibson, Edgar Lau and Roger Eagleton.

“This is unbelievable,” Rob Gibson, team owner/driver said. “There are going to be issues in a race like this, it comes down to how you handle them. Our team did a great job handling the issues throughout the race. We executed our strategy and we came through. I think there was a 40-second difference to second place at the end. My brother and team co-owner John did the last stint on old tires and did a great job.”

“At the end having the tires going away and the second place car really coming was our big drama of the weekend,” John Gibson, owner/driver said. “We had the same thing last year, but this year it was really close. Our hats are off to the 07 team. Running an Acura Integra for 25 hours and not having any issues is a great run. They pushed us the whole way. It was a tough race, but a great win.”