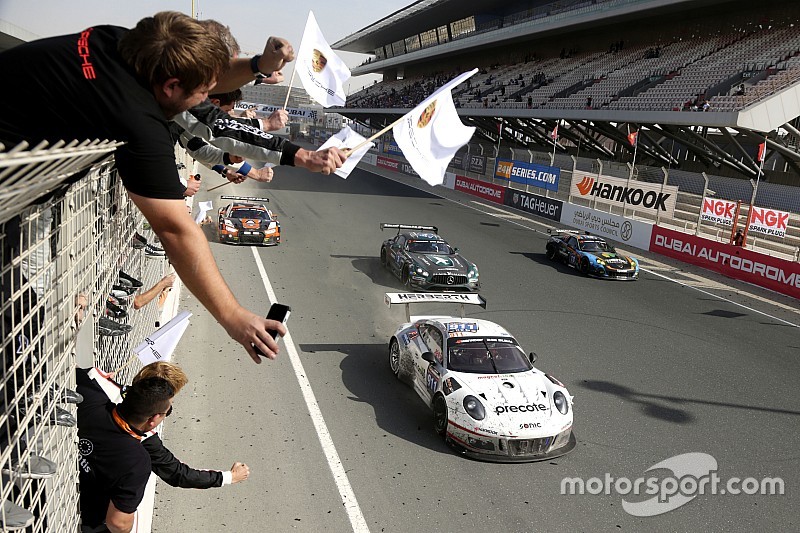 2015 FIA World Endurance champion Brendon Hartley won the first 24-hour race of his career as Herberth Motorsport swept to a comfortable victory in the Dubai 24 Hours.

Despite being only his second-ever GT race and his first in a 911 GT3-R, Hartley and teammates Robert Renauer, Alfred Renauer, Ralf Bohn and Daniel Allemann enjoyed a trouble-free run throughout to emerge with a two-lap margin over the identical Manthey Racing Porsche.

“It was an awesome experience, the first time for me in a 911,” said Hartley. “I had a great team, great teammates, I really enjoyed it. Hopefully that form will continue on to the WEC.”

The two Porsche teams had exchanged the lead throughout the night until Manthey sustained damage during hour 16 with gentleman driver Otto Klohs at the wheel.

The #2 Black Falcon Mercedes, which qualified on pole and led the first hour in the hands of Jeroen Bleekemolen, had looked well-placed to capitalise on Manthey’s misfortune, but was forced to retire when Khaled Al-Qubaisi crashed just before daybreak.

That promoted the best of the Audis, ran by British team Optimum Motorsport, to fourth, despite a loss of power steering in the closing stages which made life hard work for Christopher Haase, Joe Osborne, Ryan Ratcliffe and Flick Haigh.

A6-Am honours went to the Horfor Racing Mercedes-AMG GT3, which finished seventh overall, while Oli Webb missed out on victory in the SPX class by just 35 seconds after charging from the back of the grid and having his race overalls stolen.

Neither Robert Kubica’s Forch Racing Porsche 911 GT3-R, which at one stage ran as high as second during the pitstop cycles, nor Jean-Eric Vergne’s GP Extreme Renault RS01 would make the finish, as both suffered mechanical troubles in the early evening.