BMW Motorsport celebrated being on the winners’ podium at its home event at the Nürburgring-Nordschleife (DE), two weeks after finishing third in the GTE class at the 24 Hours of Le Mans (FR). After completing the record-breaking156 laps, the BMW M3 GT with number 1 crossed the finish line second at the 24-hour race in the “Green Hell“, in front of 250,000 spectators. Augusto Farfus (BR), Jörg Müller (DE), Uwe Alzen (DE) and Pedro Lamy (PT) took turns at the wheel, delivered a strong performance and were 4:23 minutes behind the winning no. 18 Manthey-Porsche at the end of the race. 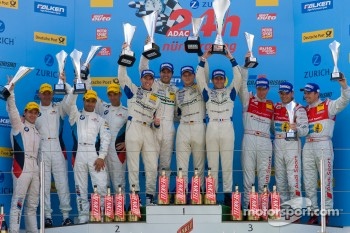 Except for a collision on lap 24 and the subsequent three-minute stop-and-go penalty, last year’s winners ran a flawless race and impressively demonstrated the high level of performance of the BMW M3 GT. At the chequered flag for the endurance classic in the Eifel they were still just defeated by what in the circumstances was a small margin.

The second car with number 7, driven by Dirk Müller (DE), Dirk Werner (DE) and Dirk Adorf (DE), was lying 16th in the standings with 139 laps completed, when the BMW M3 GT came to a halt on the circuit in the the “Breidscheid” section having lost all traction. .Earlier in the race, a problem with the brake system and the necessary repairs had cost it more than an hour. From the back of the field, the driving trio admirably worked its way back to the top-20, but was not rewarded with a finish despite its fighting spirit.

The BMW career of outgoing BMW Motorsport Director Mario Theissen, who will be succeeded by Jens Marquardt on 1st July, comes full circle with second place at the Nürburgring. In 1999, he started his term with an endurance triumph in Le Mans where the BMW V12 LMR was able to claim an outright win. His motor racing career in the service of BMW now ends with a podium finish at another 24-hour classic. BMW was able to celebrate three wins – in 2004, 2005 and 2010 – at the Nürburgring under the guidance of Theissen. BMW has been at the very front in this race a total of 19 times since 1970.

BMW continued its string of good results this season with the podium at the Nürburgring. After winning the 24-hour races in Daytona (US) and Dubai (AE), the one-two in the GT class at the 12 Hours of Sebring (US), as well as third in the GTE category at the marathon in Le Mans (FR), yet another top result now followed in the home event.

Mario Theissen (BMW Motorsport Director): “This was once again a dramatic 24-hour race here at the Nürburgring-Nordschleife. Congratulations to the squad of Olaf Manthey. They once more put in a really strong performance this weekend. The course of the race was in many ways reminiscent of last year when we celebrated victory. The big difference, however, was the fact we were able to meet our competition on the same level the entire distance this time – thanks to the meticulous continued development of the BMW M3 GT. Despite some setbacks, we were able to work our way to the front and fight for the victory until the very end. Credit is also due to our second team of drivers who fought their way to 16th from the back of the field until they were forced to retire. For me personally, this was the last race as BMW Motorsport Director. I am happy to say goodbye with such a success for our team. It all started for me at BMW Motorsport with the victory in Le Mans in 1999 – now I can leave with another podium finish at the Nordschleife. Both events mean a lot to me, and, of course, we would have liked to rack up the 20th victory for BMW. But yesterday’s incident unfortunately tipped the scales.“

Charly Lamm (Team Manager): “This has been a tough fight from the very first lap. We started quite well, but then for a short while we didn’t get everything to come together as it should have done. This was when the lead opened up, which we weren’t able to close before the chequered flag came out. We fought like lions, but more than second place was just not possible today. We were able to show, how strong the BMW M3 GT is, that we are a true endurance team and how breathtaking motor racing can be.”

Augusto Farfus (car number 1): “The Nordschleife just is the greatest track in the world. I dreamt about racing here when I was a kid. BMW has given me the opportunity to do this. Now I’m here on the podium for the second time after our victory last year. The level of competition has become even higher compared to 2010. It felt like an ultra-long world touring car race here. Although we couldn’t repeat last year’s win, second place is a fantastic result.”

Jörg Müller (car number 1): “This has been the most difficult 24-hour race that I have ever contested here at the Nürburgring-Nordschleife. Following the VLN races we knew that there would be up to 20 cars fighting for victory here. In the end, this fight went to the wire between us and the Manthey Porsche. It was good fun, and the car ran like clockwork.”

This was once again a dramatic 24-hour race here at the Nürburgring-Nordschleife.

Uwe Alzen (car number 1): “I’m completely satisfied. It was a tough fight out there, and our car ran flawlessly. This time the 24-hour race was rathe a sprint contest over 24 hours. There were many accidents, and everyone pushed to the absolute limit. I’m happy we made it onto the podium again. Of course I would have loved to score my third victory, but still second is a fantastic reward here at the Nordschleife.”

Pedro Lamy (car number 1): “It now looks as if the penalty we received after my accident in the ‘Karussell’ maybe was the decider in this race. However, I just didn’t see any other chance than going up the track the wrong way in order to get out of the danger zone. But this is a thing in the past now. Second place is a strong result, and we fought really hard for it.”

Dirk Müller (car number 7): “Following our early technical problem, I was desperately disappointed. I’m over it now, but I feel really sorry for the guys in the team. Our car doesn’t have a single scratch on it. If you imagine what would have been possible here, it gives me pain. So I can’t do anything else than look to the future. In two weeks time I’m on duty in the American Le Mans Series. I take this 24-hour race as arguably the hardest training camp in the world.”

Dirk Werner (car number 7): “There’s a huge disappointment just now. We fought back into the race and wanted to return to the top-15 ranks. Unfortunately we didn’t make it to the finish, which is a pity. But I’m quite sure there will be some more opportunities in the future to prove that we can do better.”

Dirk Adorf (car number 7): “Just like last year, we were hit by a problem in the opening stages of the race. This has been a bit of a déjà vu experience for us. So we hoped we could do it like in 2010, make it back into the top-15, with our sister car claiming the outright victory. We didn’t reach any of these goals. That’s a shame. But still I’m really proud that BMW made it to the podium again.”