Strong performance for fe in the 24 hours of Spa-Francorchamps, third round of the Blancpain Endurance Series 2011.

The Milanese driver, for the occasion in crew with the German Frank Kechele and the Italian Giacomo Petrobelli at the wheel of the number 1 Ferrari 458 Italia lined up by Team Vita4One, ended the challenging Belgian race in fifth position after a series of stints that saw him constantly among the fastest drivers on track. A problem to the lambda probe in the final stages forced the car to an unscheduled stop that cost precious laps in the fight for the top positions. The crew had the satisfaction of being the first Ferrari classified anyway. 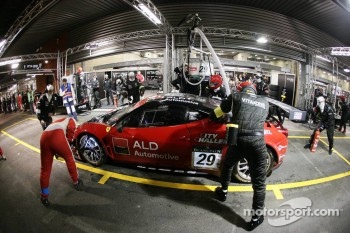 Matteo Bobbi: "It has been one of the hardest and most difficult 24h I have ever run, rain and fog made conditions very critical especially during the night. We are very happy for being the first of the Ferrari crews in the debut 24h of the 458 Italia GT3 and without the electric problem we could have battled for the podium.

My best wishes for a prompt recovery go to my friend Paolo Ruberti, who had a nasty accident at Eau-Rouge: I hope he will get well soon and to see him on track at Magny-Cours".

Bobbi is currently sixth in the classification with 38 points, just two short the fifth place.The Blancpain Endurance Series will be back on track next 27 July in Magny-Cours (France).