NASTY INCIDENT FOR PAOLO RUBERTI IN THE 24 HOURS OF SPA

Unlucky end of the 24 Hours of Spa for Paolo Ruberti in the third round of the Blancpain Endurance Series 2011.

Third in qualifying despite a problem to the gearbox in the final and decisive minutes of the Q3, the Veronese driver has been constantly fast during his stints and moved on to the lead of the Pro Cup class starting from the second hour. A contact with a lapped driver when his crew mate Raffaele Giammaria was driving nearly six hours into the race, crucial for the first points awarded, forced the number 9 Porsche 997 to a long stop to fix the damages to the radiator. 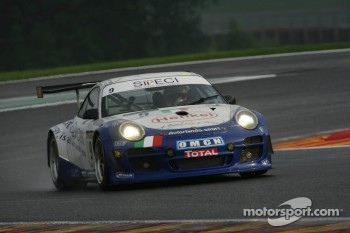 The decisive episode came during the eleventh hour, during the night and on a wet tarmac due to the falling rain: at the bottom of the famous down-hill leading to Eau-Rouge, at more than 200 km/h, Ruberti felt a strong vibration at the rear left tyre followed by a violent off track exit. The car driven by Paolo hit the barriers and came back in trajectory but luckily was not hit by the other drivers; Paolo managed to get out of the car thanks to marshals' help and was moved to the medical centre for the necessary inspections that showed the crack of some ribs that should heal within thirty days.

Paolo Ruberti: "Considering the dynamics of the incident things went pretty well. I felt a vibration to the back-end when I already inserted the car in the Eau-Rouge left-hander and I did not have time nor space to slow down; when the car slipped away I tried to counter-steer and to brake but on the wet tarmac that did not help and the contact with barriers was violent. When I bounced back on track I saw an Audi coming at full speed and for a moment I feared another contact. Then marshals arrived and I started to feel a strong chest pain that I still have. It could have gone much worse therefore, despite being sorry for the lost points, I can call myself lucky for having the chance to recover in a month".

The Blancpain Endurance Series will be back on track next 27 August in Magny-Cours (France).