Porsche looks to the 2012 season 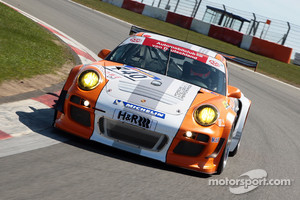 Porsche Motorsport 2012 – From the Porsche Night of Champions

Board approves further races for the 911 GT3 R Hybrid

Stuttgart – December 17 - Dr. Ing. h.c. F. PorscheAG continues to invest in the development of innovative drive technologies in motorsport. A further developed version of the Porsche 911 GT3 R Hybrid will return to race tracks in 2012. With the rolling race laboratory, Porsche aims to gain extra practical experience under racing conditions and make the hybrid drive even more efficient.

“There is no way around the hybrid technology in motorsport,” stressed Wolfgang Hatz, Board Member for Research and Development, on Saturday on the occasion of the end of year Porsche ‘Night of Champions’ celebrations. “With the 911 GT3 R Hybrid project, we have shown how you can test important future technologies on the race track and pave the way for motorsport success in the future. We will continue to determinedly blaze this trail and further develop the hybrid technology.”

Also at the Night of Champions, the Porsche 911 GT3 RSR for the 2012 season celebrated its world debut in front of invited team bosses, race drivers and series organizers. The GT race car, which is now five centimetres wider at the rear and with almost an extra 15 centimetres on the front fenders, will be fielded by Porsche customer teams in the FIA World Endurance Championship, the American Le Mans Series, the Le Mans Series, the International GT Open as well as the Le Mans 24 Hours. In the USA alone, four new vehicles will be fielded by three different teams.

“To win races you have to have the right race drivers. And there’s no doubt that we have them,” stated Matthias Müller, Chairman of the Executive Board at Porsche AG.

Most of the Porsche factory pilots kick off the season at the Daytona 24 hour race on January 28. Jörg Bergmeister and Patrick Long race a Porsche 911 GT3 Cup for Flying Lizard Motorsports. Marco Holzer supports the Alex Job squad, with Wolf Henzler and Patrick Pilet driving for the TRG team. Marc Lieb competes for the accomplished Brumos Racing crew, with Richard Lietz teaming up with Magnus Racing. The Porsche Mobil 1 Supercup Rookie of the Year winner also competes at Daytona, with Kévin Estre takeing the wheel of a TRG Porsche 911.

In 2012, the Porsche Carrera Cup Deutschland heads into its 23rd season and will continue to run as support to the DTM. The contract with the series organizers was recently extended for another three years. Taking over the helm of the long established Porsche Carrera Cup Deutschland is Andrea Hagenbach, who has worked in the organisation of the series for the last 13 years. She takes over from Helmut Greiner who is retiring.

Italy’s Gianluca Roda is again the winner of the Porsche Cup. With a large point advantage, the 52-year-old defended his achievement from last year. The Porsche Cup has been awarded by Dr. Ing. h.c. F. Porsche AG, Stuttgart, since 1970. As the brainchild of Ferry Porsche, the company honours the best private Porsche race driver each year with this trophy.

Again in 2011, Gianluca Roda celebrated a large part of his success with the Autorlando Sport team, which has its headquarters in Pedrengo near Bergamo (northern Italy). The entrepreneur from Como earned most of his points towards the Porsche Cup in the International GT Open, which runs two races per weekend. Already at the season-opener, everything went smoothly with Roda and his team mate Fabio Babini (Italy) yielding a win and a third place in their Porsche 911 GT3 R. Over the course of the season, Roda achieved five victories in the GTS class as well as four other podium results. The highlight of the year: double victory on the high-speed circuit in the Royal Park of Monza. At the season final in Barcelona (Spain) a retirement put a spoke in the wheel of his campaign. In a repeat of the previous season, Roda, Babini and the team concluded the year with vice-championship honors in the fiercely-contested GT Open Championship.

In the Blancpain Endurance Series, Gianluca Roda launched into the season with a victory at the wheel of the Porsche 911 GT3 R fielded by Autorlando Sport – in Monza of course. Joining forces with his Italian teammates Paolo Ruberti and Raffaele Giammaria they secured two second places in Navarra (Spain) and Magny-Cours (France) as well as fourth in Silverstone (Great Britain). Only at the 24 hour race of Spa-Francorchamps (Belgium), which also counted towards the Blancpain series, did he come home empty-handed in twelfth.

The ambitious Porsche driver also competed for the German Proton Competition squad in the Porsche 911 GT3 RSR – with top results. At the Sebring 12 Hours in Florida, one of the world’s great endurance classics, Roda underscored his reliability and skill. Teaming up with Christian Ried (Germany) and Porsche works driver Richard Lietz (Austria), the Italian climbed the podium after twelve hours in second place. The Sebring race also counted as the season-opening round of the American Le Mans Series. Team owner Ried also signed up the experienced Roda for the races of the Le Mans Series in Imola and Silverstone. And again he finished both races second in the GTE Am class; in Italy with Porsche factory pilot Patrick Long (USA) providing back up and supported in Great Britain by works driver Patrick Pilet (France).

By again clinching the Porsche Cup, Gianluca Roda has secured a very special place in the long list of Cup winners. The only other drivers to manage the feat of taking the coveted trophy home two consecutive times was the current Porsche team boss Franz Konrad (Austria) and Frenchman Bob Wollek who died in 2001.

Second place in this year’s Cup goes to Paolo Ruberti, making it a one-two for the Italians. The 36-year-old from Legnano in the Veneto region predominantly earned his points with excellent results from the Italian GT Championship, where he yielded two wins and four second places. Alongside Gianluca Roda in the International GT Open, he harvested a stack of points for his victories, podium places and points for the standings.

After an extremely successful season in the American Le Mans Series, Bryan Sellers clinched third place in the 2011 Porsche Cup. The 29-year-old American was supported by Porsche works driver Wolf Henzler (Germany) competing for the Falken Tire team. The highlights of the year for the privateer and professional with the Porsche 911 GT3 RSR came in Mid Ohio and Baltimore. Both times the Falken-911 saw the flag in first against high calibre competition in the GT class.

On December 17 at the Night of Champions in the R&D Centre in Weissach, Gianluca Roda received the Porsche Cup from Dr. Wolfgang Porsche, Chairman of the Supervisory Board at Porsche AG.In addition to the valuable challenge cup, world’s most accomplished Porsche private driver of the year takes home a Porsche 911 GT3 road car. The Porsche Cup carries a total value of over 250,000 Euro, with positions two to ten receiving prize money. Drivers earned points towards this year’s traditional competition in 18 Grand Touring and prototype race series worldwide as well as at selected long distance races.

Porsche appreciates the commitment and successes of all participating drivers and their teams during the 2011 racing season. Here are the final top ten point standings:

With an international youth development program, Porsche continues to expand its racing involvement. From the 2012 season on, initially two young drivers will receive support as Porsche Juniors for their Carrera Cup Deutschland campaign. Porsche provides them with a large portion of the season’s budget. The young pilots will choose a team themselves. A Junior coach assists them with their training away from the circuits and is available for mentoring at the race tracks. Initially, the programme runs over four years.

In their second season, if their performance is good enough, the Porsche Juniors should switch to the world’s fastest international one-make series, the Porsche Mobil 1 Supercup, which is run as support to Formula 1 races. At the same time, Porsche selects new talented youngsters who will launch their GT careers in the Carrera Cup Deutschland. Aside from financial support, the pilots receive the similar assistance as the internationally successful Porsche factory drivers. Fitness tests with constantly adapted training plans as well as media training and sponsor obligations are also part of the program.

“With our long term Youth Development Program, we continue the extremely successful tradition of the Porsche Junior team,” says Hartmut Kristen, Head of Porsche Motorsport. “For us, supporting talented youngsters is an investment in the future. In line with our LMP1 project we want to expand our driver line up. After all, aside from our works commitment in prototype racing, we don’t want to neglect our GT racing activities and we also want to support our customer teams with works drivers in the future.”

Porsche has been intensively involved in supporting youngsters in motorsport since 1997. Today’s Porsche factory pilots Timo Bernhard, Marc Lieb and Patrick Long were trained as Porsche Juniors. Recently in 2011, Marco Holzer made the leap from Porsche Junior to works driver. Other great names in motorsport to emerge from this scholarship programme are Dirk Müller, Lucas Luhr and Mike Rockenfeller.