United Autosports achieved hard-earned 13th and 19th overall placings – sixth and eighth in the Pro-Am category – in the 63rd running of the ultra-competitive Total 24 Hours of Spa which finished in Belgium today and was won by Audi. 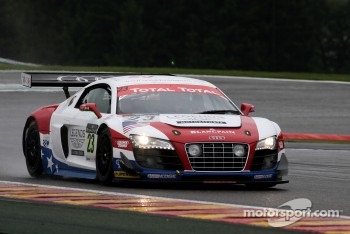 The Anglo-American team set the bar high for its only twice-around-the-clock marathon with the GT3 category Audi R8 LMS sports car aiming to add to its fourth place in the Rolex 24 Hours of Daytona in January and replicate its excellent third and fourth GT3 class places achieved at Spa last year – a race it led and which marked the team’s maiden 24 hour event.

Bell had swept the #11 up to 14th after an hour from his 34th start place but the Audi, with Patterson now at the wheel, lost 20mins after two pit-stops in quick succession with just over two hours gone. An electrical issue necessitating a change of the ECU dropped it to 54th (nine laps down).

Patterson set an impressive best lap for the #11 Audi before handing over to Cheever who agonizingly coasted to a standstill with no power after 5½hrs when placed 38th.

The #12 moved up impressively from 53rd on the 62-car grid to inside the top-30 despite two harmless spins while the #23 Audi was up to 17th in the sixth hour after solid stints by Dean, Brown, Johansson and ultimately Herbert. However Johnny, who set his car’s fastest race lap on Sunday, lost 14mins to cure a misfire moments after the demise of the #11 – Herbert resuming 27th.

After nine hours, #23 (Dean) and #12 (Luyendyk) lay 17th and 25th respectively but the #23 dropped to 26th after a 24mins pit-stop at 3am to repair damaged steering when Johansson suffered contact with another car.

It has been great to work with Mark, Eddie and Matt and with United Autosports again.

The #12 had worked its way up to 22nd by mid-distance but shortly afterwards, a 31mins pit-stop to replace a power steering pump saw Li resume in 27th. With three hours to run, the UA cars lay 16th (#23) and 17th (#12) despite an unscheduled six minute pit-stop to repair damaged bodywork on the #23. Dean (#23) moved up to 14th with an hour to run while Luyendyk (#12) cruelly dropped two places from 17th after solid drives by Li, Meins, Richard and Luyendyk – the latter setting his car’s fastest lap – with 30mins remaining to ultimately be classified 19th after a gear selection issue during the final 70mins. Indeed such was the intensity of the competition, only 31 cars were classified at the finish of the race won by the factory-backed #33 Audi R8 LMS sports car.

UA leads the BGT with four races remaining and concludes its second FIA GT3 season with a brace of races apiece in Slovakia and the Netherlands.

Its second season of competition, which began with Blundell, Brown, Patterson and Martin Brundle (GB) finishing fourth in the Rolex 24, draws to a close with a GT Cup race in Macau (China) in November with its Audi R8 LMS sports cars.

Matt Bell
“The start of the race was manic. The car’s handling wasn’t great as I was on worn tires but we made an adjustment in the pit stop which improved the balance. Near the end of my stint the car suddenly lost power and it went into ‘safe’ mode so I had to do a re-set. What with the weather conditions on Thursday and going out so early in the race, it’s been a baptism of fire in terms of my maiden 24 hour race but it’s been a good experience.”

Mark Blundell
“I am personally disappointed but more for the entire team, who worked very hard, and the sponsors who have supported us. Of course it would have been nice to drive with my co-drivers and get to the end of the 24 hours and claim another top result like last year but it wasn’t to be on that occasion. It has been great to work with Mark, Eddie and Matt and with United Autosports again.”

Eddie Cheever
“The car went slower and slower and then the power just cut off completely after I’d heard a noise. I’m very disappointed – it’s such a shame for the team and my co-drivers. We ran on a different compound of tire to what we did last year and seemed to be always chasing the right balance. It was fun to drive here at Spa again – I’m just gutted to be out so early in the race.”

Mark Patterson
“Matt had done a great stint before I took over. But immediately after a Safety Car period the revs increased but the speed didn’t when I hit the accelerator. I tried different gears but the problem remained so I pitted. We replaced the ECU and dropped nine laps but after that the Audi felt like a brand new car and I drove the single best stint of my life. The R8 LMS was just fantastic. It’s such a shame we went out so early.”


“Our car crew came up with a good aggressive strategy that brought us inside the top-20. I tried to not take any risks and be consistent but after the second safety car re-start, someone spun me around at the ‘bus stop’. In the last phase of my second triple stint, I felt the steering tighten, so pitted for a new power steering pump. It was a great effort from United Autosports, from all the boys, from my team-mates and our Audi. It is one of the best motor racing events that I have been to.”

Arie Luyendyk
“It rained during my first stint which made racing on ‘slicks’ pretty tricky. But it was a really good stint and I was happy with my performance having found a good rhythm that deserted me for my second stint in which the tires went off making the Audi hard to drive. In my last stints on Sunday afternoon, there was a gearbox issue which ultimately brought our race to a premature end. Nevertheless it was an enjoyable experience and I was happy with my pace.” 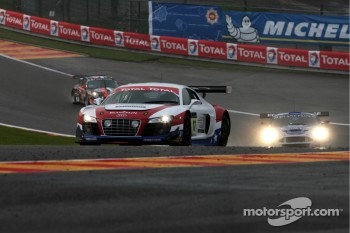 Alain Li Richard Meins
“I had a great race and thoroughly enjoyed it. Our problem has been tires which seem to be good for maybe just one stint. At the end of my first stint I had a massive spin which was a bit hairy but really enjoyed my two stints this morning when the car felt good. It’s been a fantastic weekend driving with all the other guys – brilliant.”

Henri Richard
“I had never driven on this track but was familiar with the Audi from the Zhuhai race last November but on these tires, the car behaved quite differently and it took me time to get on the pace. My first stint, a triple into the night, proved to be a lot of work, and but my second one felt a lot better in which I set my personal fastest lap. I take a positive view – it’s setting the base line for a much faster pace next year. There are a lot of mixed emotions with the result but I’m philosophical. 24 hour races are always extremely difficult just to finish let alone to get a position.”

Zak Brown (
“I was happy with my stints, setting my personal best on Sunday morning, so I’m happy overall. We continue to struggle with the tires. The Audi was essentially good but we had some issues which you can expect in a 24 hour race. It was really unfortunate that our #11 Audi went out so early and then the #12 car dropped a couple of places late in the race. Given what a rough race it was, I’m pretty happy to finish 13th from where we started on this extraordinarily strong grid. Our race crew did a fantastic job and – they never gave up. Congratulations must go to Audi Sport Team WRT on it’s victory in what is a very important and prestigious race.”

Richard Dean (
“My stints were uneventful and without drama although I found it physically harder than last year. The competition was extremely tough with an amazing field of GT3 cars and for me Zak was the ‘stand out’ in our car – he was quick and consistent. I’m really proud of our team as the run up to here was very tough. We’ve been racing five weekends out of the last six and so to put on this kind of a showing is fantastic. I am disappointed that Eddie couldn’t get the #11 car back from the track as his co-drivers and crew deserved more from the weekend. Then our #12 dropped a couple of places right at the end – it doesn’t get much harder than that.”

Perhaps I can come back here next year and make it third time lucky.

Johnny Herbert
“We had to hustle the car because it was never totally settled on these tires – the only time was on hard tires. That makes the weekend more frustrating because we know how good the Audi R8 LMS is but we weren’t able to get the right balance and so struggled. We had an electronics issue but apart from that the Audi ran faultlessly. I’m glad I have done this race for the first time, especially with all of the drivers in the United team. I’d love to come back and do better next year.”

Stefan Johansson
“In the main, I found the car extremely hard to drive in each of my stints and had to work extremely hard to set decent times. Much of it was due to the massive amount of rubber ‘pick-up’. I also thought some of the driving standards left much to be desired at times. But Zak and Richard pulled together a great team of drivers and we’ve had some real fun this weekend. Perhaps I can come back here next year and make it third time lucky.”