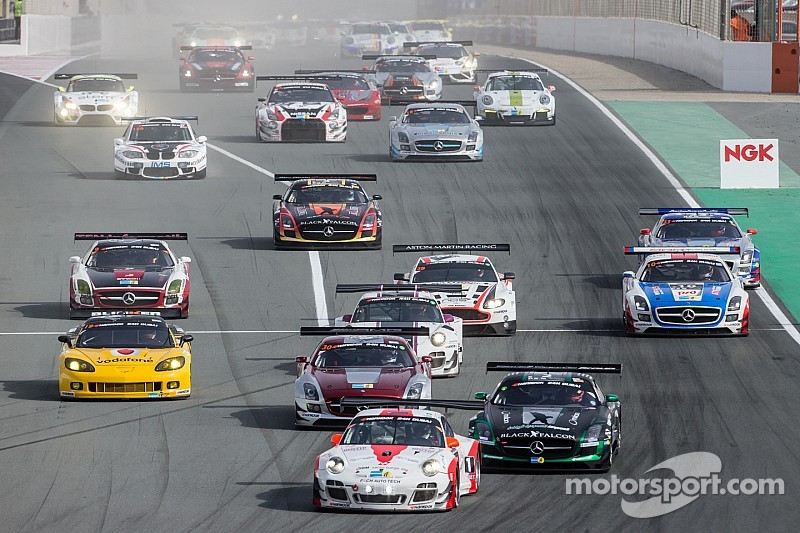 89 cars taking the start marks a record field for the first international endurance race of the new calendar year.

At 14.00 hrs local time, His Highness Sheikh Juma al Maktoum waved the national flag of the United Arab Emirates to send off the field of 89 cars for this year’s tenth running of the Hankook 24H DUBAI. After some incidents in yesterday’s practice and qualifying sessions, certain cars were damaged beyond repair and were sidelined from the race, but the number of 89 cars taking the start still marks a record field for the first international endurance race of the new calendar year.

His Excellency Dr. Mohammed Ben Sulayem, vice-president of the FIA and president of the Automobile and Touring Club of the United Arab Emirates (ATCUAE) also attended the start of the race.

The first ‘code 60’, a neutralisation in which no driver is allowed to go faster than an average of 60 km/h, was called during the first lap of racing after the Nova Race Ginetta (#167, Vescovi/Ferri/Gentili/Fletcher) had spread oil on the circuit before coming to a halt on the track.

Racing resumed after 30 minutes. In the following half hour, there was a fierce battle for the lead between pole-sitter Martin Ragginger in the FACH AUTO TECH Porsche (#12, Klohs/Ragginger/Richter/Müller) and Yelmer Buurman in the fastest of the two Black Falcon Mercedes-Benz SLS AMG GT3s (#2, Al Faisal/Haupt/Buurman/Webb). Buurman took the lead in the race just before the one-hour mark. A few minutes later, German driver Kenneth Heyer spun and hit the Armco barriers with the Hofor Racing Mercedes-Benz (#9, Kroll/Heyer/Frankenhout/Eggimann/Rehfeld). The second ‘code 60’ was called to allow for the debris to be removed from the track.

One hour into the race, the UAE-based Dragon Racing team’s Ferrari 458 Italia (#88, Jawa/Grogor/Griffin/Barff) is leading the A6-Am class. The best-placed Porsche Cup car is the Black Falcon entry (#26, Fjordbach/Sawa/Al Faisal/Weishaupt). The GC Automobile GC 10 V8 (#150, Varutti/Pontais/Thiel/Amrouche) is on top in SP2, the Optimum Motorsport Ginetta (#163, Hankey/Yoluc/Ellis/Barwick) is leading in SP3.

The best-placed touring car is the leading A5 car, the JR Motorsport BMW (#77, Herber/Lanting/Gill/Jaffray) with the local Memac Ogilvy Duel Racing SEAT Leon Supercopa (#95, Moutran/Moutran/Moutran/Quaife) leading A3T and the Besaplast Racing Team Mini (#86, Kovac/Lestrup/Jordan/Littig) in control in A2. The MPB Racing Team BMW M235i (#74, Henkola/Kuhs/Henzel/Müller) is leading the CUP1 class.

Mercedes muscle to the front early in 24 Hours of Dubai