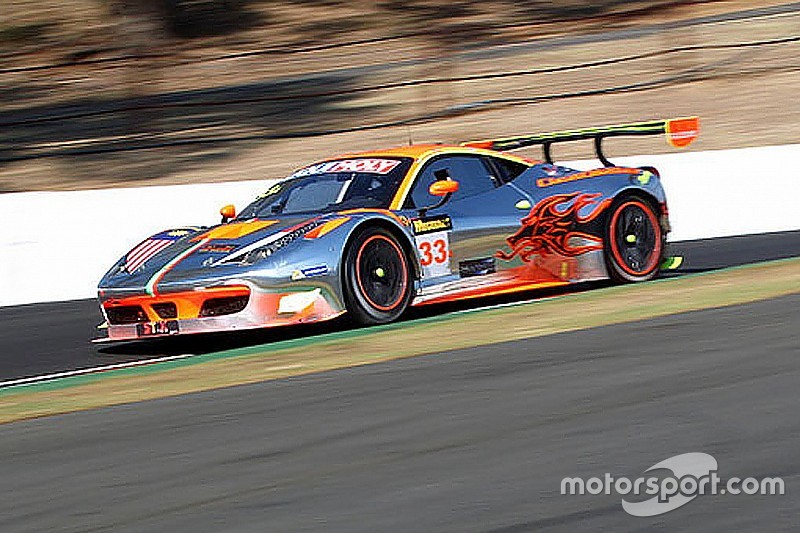 Gianmaria Bruni beat Laurens Vanthoor by just over two tenths of a second.

They had already dominated the free practice sessions and now the #1 Clearwater Racing Ferrari will start the 2015 Sepang 12 Hours from pole position as well. In the top-15 shootout Gianmaria Bruni beat Laurens Vanthoor in the #17 Belgian Audi Club Team WRT Audi by just over two tenths of a second.

The second row of the grid will be shared by the #55 FFF Racing Team by ACM McLaren and the #11 Singha Motorsport Team Ferrari. Mitchell Gilbert (#69 Team Fydis Aylezo Lamborghini) took pole in the GTC class, with Grant Johnson (#602 Jim Hunter Motorsport Subaru) edging to the front of the Touring Car division.

Qualifying was tough, the gap was not that big,

The Clearwater Racing Ferrari - winner of the last two editions of the Sepang 12 Hours - was always going to be one of the contenders for the overall win in the 2015 edition of the Asian endurance classic, but the performances of Weng Sun Mok, Matt Griffin, James Calado and Gianmaria Bruni during the different sessions of the event now surely promote them to the position of number one favourite.

The Italian ex-F1-driver had the honour of taking the wheel of the #1 Ferrari during the top-15 shootout and Bruni had little trouble to claim the top spot with his first quick lap. Both Nobuteru Taniguchi (#35 Team AAI - HubAuto Mercedes) and Laurens Vanthoor (#17 Belgian Audi Club Team WRT Audi) came close though, but whereas the Belgian preferred to stay out and have another go (without success), the SLS-driver pitted with a tyre problem, which had to be solved by the team.

Allowed under the rules, but they also stipulate that Taniguchi now had to forfeit his lap time and start all over again. He clocked another fast lap, but could not get higher than sixth. That promoted the #55 FFF Racing Team by ACM McLaren of Alvaro Parente to third, a mere six hundredths of a second in front of the #11 Singha Motorsport Team Ferrari of Carlo Van Dam.

Three cars from the GTC-class managed to get into the top-15 shootout and of those three, the #69 Team Fydis Aylezo Lamborghini was clearly the quickest. Mitchell Gilbert beat the #26 B-Quick Racing Audi of Peter Kox by over two seconds, confirming the car's performances from the free practice sessions. In the Touring Car division, the duel between Toyota and Subaru went in favour of the latter, when Grant Johnson edged in front with only seconds to spare in the main qualifying session. The gap between his #602 Jim Hunter Motorsport Subaru and the #86 Wing Hin Motorsport Toyota of Kenny Lee was only half a tenth of a second.

Gianmaria Bruni (#1 Clearwater Racing Ferrari): "I have to thank Clearwater Racing for all the hard work they have put in, to be ready for this weekend. That really is the secret behind our performances during the past few days. Qualifying was tough, the gap was not that big, but I am of course happy to be on pole."

Laurens Vanthoor (#17 Belgian Audi Club Team WRT Audi): "It's good to be back at the wheel of a racing car. After my accident I worked very hard to get back into shape and I think I am 99% ready. The race will be hard, but the hot and humid conditions make it hard for everybody."

Alvaro Parente (#55 FFF Racing Team by ACM McLaren): "Honestly, I did not expect to be in this position after qualifying. It was a pretty good lap, but we have not been this close all week. We still seem to struggle coming out of the corners, but I hope that in the race we can be strong towards the end of the stints. I am very much looking forward to it."

Mitchell Gilbert (#69 Team Fydis Aylezo Lamborghini, 1st GTC): "I am pretty confident for the race. We are all comfortable in the car and are all doing good lap times. Lamborghini has given us very good support and now we have to try and keep it going. I tried to take on some of the GT3-cars, but the gap is too big. But if in the race something happens in front, we might end up well inside the top-10 overall."

Grant Johnson (#602 Jim Hunter Motorsport Subaru, 1st Touring Car): "I just got it all together when it counted, I guess. We have had some problems and the team has spent most part of the last 24 hours at the track and they will probably do so for the next 24 hours as well! We'll see what happens in it race, because that is when it counts. »

A new life begins in Sepang for Vincent Abril