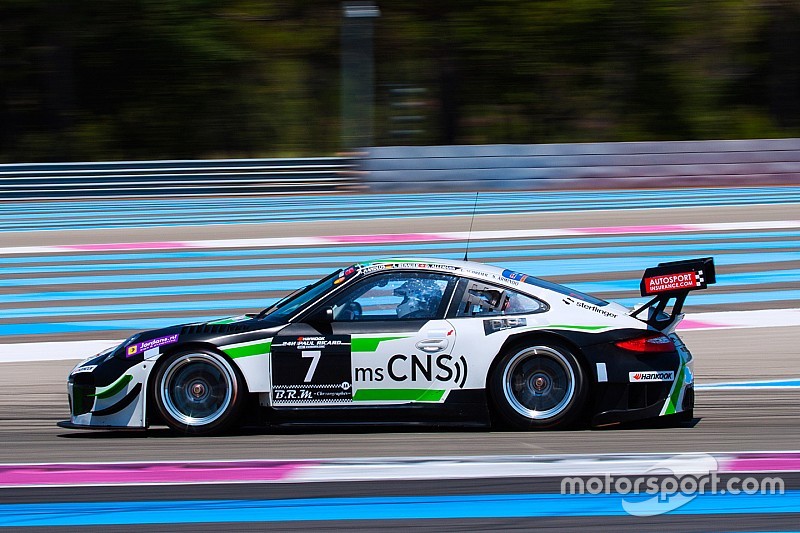 Montmelo – With Daniel Allemann at the wheel, the Porsche 997 GT3 R of HB Racing Team Herberth leads the 24H Barcelona after three hours. Two Mercedes SLS AMGs are running second and third. Chantal Kroll is aboard the 10 Hofor Racing entry. She is also leading the Ladies Cup that will be awarded during the 2015 International Endurance Series. Third overall is Jeroen Bleekemolen, driving the #30 Ram Racing Mercedes.

The 74 car field took the start exactly at noon under clear and warm skies. Renger van der Zande was the early leader, starting from pole position in the #5 Car Collection Motorsport Mercedes. The first of the leaders to hit trouble was the #4 Scuderia Praha Ferrari which stopped on course with a broken gearbox. During the second hour the #5 Mercedes dropped back with overheating issues.

The #59 Classic Motors by RMS Porsche 991 Cup leads the 997 class and has been fighting a fierce battle with the #54 991 Cup of the Drivex team. The latter car led the class for long periods during the opening hours. The RWT Racing Team Corvette leads the SP2 class and their stong performance lifted the car to sixth overall. The lead in the all-Lamborghini Hurracan SP-X class was being swapped back and forth between the two Sportec Motorsport entries with the #21 car Roberto Pampanini in front at this juncture.

Three of the classes have featured dominant performances thanks to some trouble-free runs to date. The #43 APO Sport Porsche 997 Cup GT4 has led the SP3 class from the start while the #95 Memac Ogily Duel Racing Seat Leon Racer is proving very strong in A3T. Jacob Kristensen, brother of Le Mans great Tom, put in a fine opening stint to put the #115 Team K-Rejser Peugeot RCZ well ahead of the other A2 class competitors.

The Lithuanian entered #137 Kaukas Volkwagen Golf slipped into the lead of the D1 class. For most of the opening period this all-diesel group was headed by the all-Hungarian team of RCM Motorsport in the #139 Seat Leon TDI.

The race has run incident free apart from three very short Code 60 neutralisations to recover stranded cars and collect some debris. In addition to the delayed Ferrari, one other potential overall winner has had a major setback. The #3 Walkenhorst Motorsport BMW Z4 had considerable front end damage and lost much time in the pit garage.

The 24H Barcelona continues through noon on Sunday.