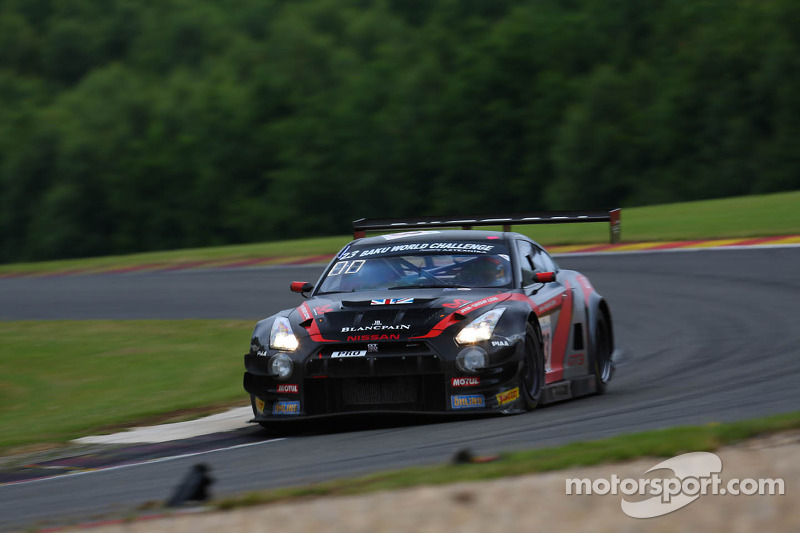 The #23 Nissan GT-R Nismo GT3 of JRM Racing today came within 20 minutes of finishing one of the toughest endurance races on the calendar, the Total 24 Hours of Spa, run at the 7km legendary Spa-Francorchamps circuit. The Pro car entry of Lucas Luhr, Steven Kane and Peter Dumbreck completed 497 laps (close to 3,500km) and 23 hours 15 minutes over the extraordinary race of attrition, which also claimed the scalps of several major contenders including home favourites Marc VDS and several ‘works’ Audis and Porsches. Ultimately the car retired with drivetrain issues within sight of the finish line. 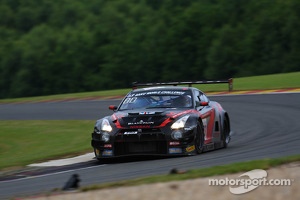 ‘In the car’s first-ever 24 hour event, coming so close to finishing is a major achievement,’ said team principal James Rumsey. ‘While it’s not the result we would have dreamt of, we’ve pulled together as a team and came within a few laps of taking the chequered flag. Many others, with proven packages, also didn’t make it so we can take this as a positive. While JRM Racing didn’t make it, there is success elsewhere in that the RJN Nissan finished third in class, so we have an indication of what the car is capable of without any major issues.’

It was not an easy event for the #23 from the start with stoppages and delays coming early on. Brake issues, a stuck wheel nut and finally a rear end repair at the eight hour mark combined to lose a total of more than 50 laps and effectively limit the ability to challenge for the class honours and overall win. Despite the problems there were positives: in clear air the car proved to be competitive and rapid, with highlights including Lucas setting times comparable to the top five and Steven bringing the car up to P14 overall in the early part of the race.

The sister Pro Am #230 Nissan GT-R Nismo GT3 of Charles Bateman, Matt Bell, Jody Fannin and Humaid Al-Masaood corroborated the overall competitive package of the Nissan GT-R Nismo GT3. British racer Matt Bell started the race and was able to use car’s power to carve through the field in the first two hours. After just a double stint the Geordie was up to seventh in class and closing on the overall top 20. Jody, Charles and Humaid likewise enjoyed good runs, but as per the #23, the car suffered a series of delays with brakes and various hardware issues that ultimately put them out of contention for the class honours.

More than 45 laps behind, the goal became finishing the race, however as the sun came out, the race of attrition claimed yet another victim when the #230 car lost drive on track. Humaid Al Masaood, at the wheel at the time, reset the car to try and return to the pits, but the problem could not be repaired without recovery to the garage and the car was officially retired at around 06:30am.

Peter Dumbreck (Pro car #23 driver): "I think it was clear that we were moving up the order very quickly in the first stint. At the end I had a few problems with the car, which meant a slightly longer pit stop than normal, but we were still running in a higher position than our starting position. The heat caused us a few more problems and dropped us down the order some more. At that point it became a race where we just wanted to get to the end and it looked like we were going to do it, but there was one little twist in the end.

To get within the last 30 minutes of finishing a 24 hour race is pretty tough to take but things like this happen. From a car point of view we can take a lot of lessons away from this weekend that will be important for improving the car next year so we can come back fighting harder. Although it is certainly hard to take at the moment, every bad thing has a silver lining and we can move on from this."

Lucas Luhr (Pro car #23 driver): "The weekend started badly in qualifying when we started so low down, but then we moved some way up at the start. When we started having little issues here and there it all added up as the GT3 field is very competitive and you can’t have things like this. At the end of the day, that we didn’t finish the race with 20mins to go is a shame but let’s be honest: we were 50 odd laps down and it doesn’t make a lot of difference as we had come so far already. It would have been nice for the boys as they worked very hard to get a bit of reward."

Steven Kane (Pro car #23 driver): "It’s a bit of a blow to take after getting so close, but the whole race was a bit up and down. When we were running we could set some good lap times and race competitively, but there were just too many small issues and we lost too much time to be able to make an impact on the race. Early on we just set our goal to get to the end and we were nearly there. I was in the car at the time and it just got stuck in gear and wouldn’t shift. I brought it round to the pits and we tried to do it but it was a case of so near and so far."

Matt Bell (Pro Am car #230 driver): "I was in the car for the start and we had a fairly good first stint, despite the cockpit being absolutely roasting! It was hotter than we expected and it was hard to drive, particularly as the car was pretty sensitive under braking, but it didn’t seem to make a difference to the lap times – I could get past cars in traffic fairly easily, which was good as there was a lot out there!

After the safety car it was pretty much the same, although the brakes did start to go off a little. When I got out the car we were in a strong position – P7 in class – and I think we could have held this, but then the issues started and ultimately we lost a lot of laps. I had another stint around eight hours in and the lap times were still competitive, but we were just too far back to make an impact, and then the car stopped when I handed it over to Humaid.

Although everyone would have loved to finish, particularly after the work the guys put in, it is the hardest GT race in the world. Overall JRM wanted to prove it could perform competitively in the race and there is still a GT-R on the podium. While we would have liked it to be our car, it’s still proves the car’s credentials.

Jody Fannin (Pro Am car #230 driver): "At the start of the race there were a couple of safety cars but we seemed to deal with them well and Matt got the car into a great position when I took over after. The first part of my stint was good, although very hot as the ambient temperatures were higher than expected.

The helmet air vent fell out a couple of times, which didn’t help, but I did a stint and a half and was looking pretty good. Unfortunately coming to the end of my second stint the seal on the exhaust got hot. I wasn’t aware of it at the time to be honest as I thought it was just a brake fire. Then I stopped in the pits and heard everyone say fire and jumped out really quickly! After a couple of hours’ sleep I drove again between 3.30 and 5.30am.

It felt quite good and consistent and I could push hard – we set the quickest lap of our race in this period. The Nissan was pretty easy to drive and could have done another stint if I needed to, but then obviously the car stopped out on track. Despite not finishing it was a good experience, especially driving at night, which I hadn’t done before this weekend. I’ve learnt a lot."

Charles Bateman (Pro Am car #230 driver): "It was a really short race for me – just a one hour stint! I got in after Jody and drove from about the fifth hour. The car felt good but I was compromised with my seat position at the start – the seat insert was in the wrong place. All the same, the car felt balanced and strong and it got easier as the temperatures dropped overnight.

I was looking forward to getting back in there again as the more you do round here, the more you learn and also the car was improving as the race went on. It’s a shame we had the problem as it ultimately led to our retirement but I’ve enjoyed the experience and getting a stab at my first 24 hour race."

Humaid Al-Masaood (Pro Am car #230 driver): "I enjoyed it out there. I got in the car after Jody and did one stint, then went back in for a double one after Charles at the six hour mark. It was challenging – particularly when it was hot – but once you get used to it it was ok and the lap times were consistent. In the middle of my second run as the sun came up there was a very sudden stoppage – the car just stopped without warning on track at the top of the Raidillon.

There was a lot of grinding then the car wouldn’t change gears so I had to stop. We tried everything to get it restarted but it was mechanical rather than electrical so that was it. It was a shame particularly after the guys in the garage worked so hard to get the car ready after the stoppages.

Nigel Stepney, team manager and chief engineer: "We set ourselves some really ambitious targets this weekend, some of which we have achieved, others of which we can chalk up to experience. The most important is that we have gone the distance with one car and we learnt a lot. There were a few issues with brakes that we have not experienced before, but Spa is a very specific circuit so we may have to look at this as a one-case scenario.

But the other issues were largely teething problems – the first 24 hour race for any car is always going to be a tough one as you are learning as you go along! I’d like to thank all the team and the drivers for being so professional. We’ve not had it easy, but everything we have had we’ve dealt with, which will make the overall package a lot stronger for the future."

How a DTM failure became an unlikely Nurburgring 24h winner

How a DTM failure became an unlikely Nurburgring 24h winner