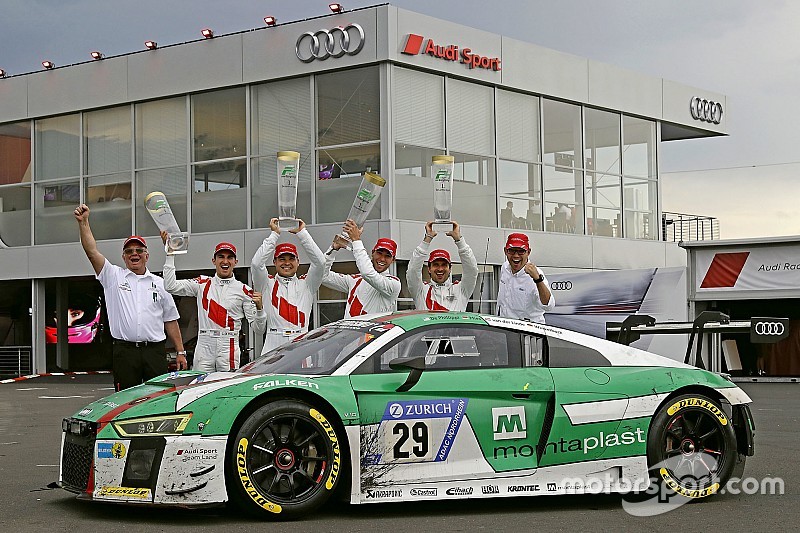 Land Motorsport Audi driver Connor de Phillippi believed the team's Nurburgring 24 Hours victory challenge was "over" prior to its final pitstop, which proved critical to a dramatic final-lap win.

Land's #29 Audi R8 LMS of de Phillippi and teammates Markus Winkelhock, Christopher Mies and Kelvin van der Linde controlled the majority of the Nordschleife event after taking the lead in the early stages, heading the field for 125 of the 158 laps.

However, what had looked like being an easy victory was thrown into doubt on the 149th lap when the #29 car lost power with an electrical fault and returned to the pits for a full system reset.

Van der Linde rejoined in third after that stop, but took the lead back after what proved to be an inspired decision to switch to wet tyres during the final pitstops - and went on to win by 29 seconds.

But de Phillippi revealed that the tyre change very nearly didn't happen at all, and was only a result of van der Linde trying to leave his pitbox before he had been fully refuelled.

"We did a little software update as I got out [of the car] because we thought we had some issue," recalled de Phillippi. "Instead of helping, it went the wrong way and we had some problems to get the engine to run.

"We had to come back directly in the box, so we lost that whole Grand Prix lap and once that happened we thought the race was over for us.

"At the last pitstop when we switched to the rain tyres, that wasn't even planned. He [van der Linde] started to pull away while we were still refuelling and that made us stay in the box for an extra 15 seconds.

"During these 15 seconds it started to rain. That little mistake allowed us to switch from the new slicks to the rains and that was the difference.

"I could not believe it. Once we saw the amount of rain on the track, Chris [Mies] and I looked at each other and said: 'We can do this, Kelvin can do this.' And sure enough he pulled off the win."

Van der Linde admitted luck played a role in delivering he and his crewmates the win, but said he knew he had to push following the #29 car's electrical problem to try and salvage a result.

"It was a rollercoaster of emotions, hard to describe," van der Linde said. "I saw the boys in the box after the issues we had and I knew I had to push and get something out of the result.

"The team asked me to push because we were in a good situation. I think they didn't want to give me too much information because it was changing all the time, they just wanted me to focus on what I was doing.

"In the end we had a bit of luck, but that's what you need in racing."