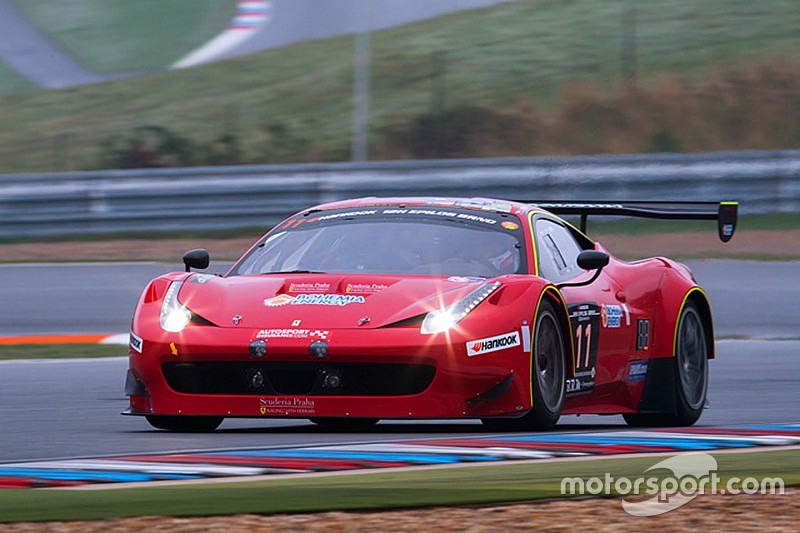 Matteo Malucelli was first across the finish line in the Scuderia Praha Ferrari 458 Italia on the final round of the 2015 24H Series.

Brno  – After twelve hours of racing at the Automotodrom Brno, Matteo Malucelli was first across the finish line in the Scuderia Praha Ferrari 458 Italia GT3 (#11, Jiri Pisarik/Jaromir Jirik/Matteo Malucelli/Peter Kox) and thus claimed victory in the Hankook 12H Epilog Brno, the final round of the 2015 24H Series powered by Hankook. In total, the Italian and his team-mates completed 324 laps of the 5.403 kilometres long circuit. They had an advantage of one lap seconds on the Ram Racing Mercedes-Benz. (#30, Tom Onslow-Cole/Paul White/Thomas Jäger).

A total of 8,000 spectators attended the first-ever running of the Epilog event, the traditional end-of-season endurance race at the Automotodrom Brno as a round of the 24H SERIES powered by Hankook. They got to see a nice battle between the Scuderia Praha Ferrari 458 Italia GT3 and the Ram Racing Mercedes-Benz SLS AMG GT3 that went on for the best part of the twelve hours. As a result of different pit stop strategies and slight variations in the lap times achieved by the drivers, the lead changed several times between the two teams, but in the final quarter of the race, the Ferrari appeared to have a slight advantage and remained in front until the chequered flag was out.

Victory in the 997 class went to Austrian team MSG Motorsport that had a largely trouble-free run with its Porsche 991 Cup car (#51, Felix Wimmer/Luca Rettenbacher/Klaus Bachler), the drivers leading leading their class almost throughout the race and finishing eighth overall as the best-placed non-A6 class car. The two MARC Cars Australia entries ran first and second in the SP2 class for most of the race, but some issues in the final two hours allowed the Scuderia Praha’s Ferrari 458 Challenge car (#44, Dusan Palcr/Josef Jakubik/Lubomir Jakubik/Matteo Cressoni) come to the fore and take the class win, doubling up the success for Scuderia Praha in its home race.

In class A3T, there was a close fight for class honours between the best of the Team Altran’s two Peugeot 208 GTIs (#205, Mathieu Sentis/Stéphane Ventaja/Sarah Bovy) and the Memac Ogilvy Duel Racing SEAT Leon Cup Racer (#95, Ramzi Moutran/Nabil Moutran/Sami Moutran/Phil Quaife), that saw the Peugeot coming out on top. Last but not least, Presenza.eu Racing Team Switzerland took the A2 class honours with its Renault Clio (#112, Luigi Stanco/Stefan Tanner/Klaus Kresnik).