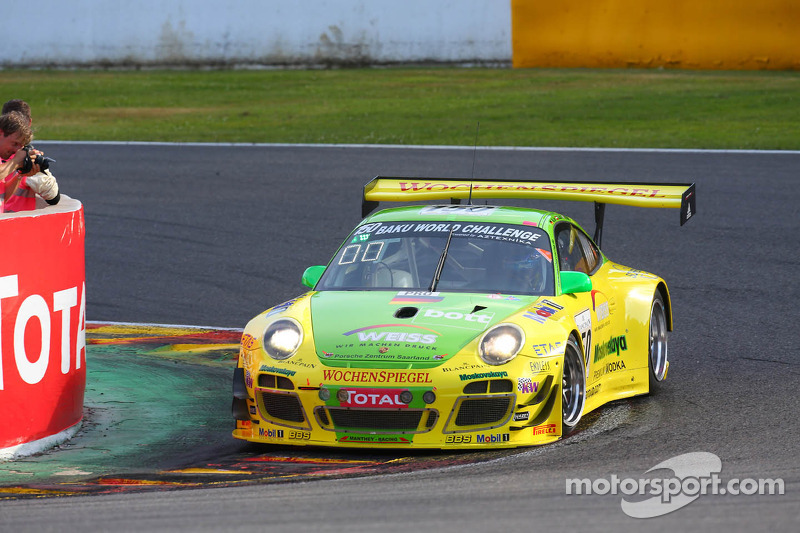 Drivers keeping on pushing towards the halfway mark in the 4th round of the Blancpain Endurance Series.

While thousands of spectators were enjoying a colourful concert, the drivers kept on pushing towards the halfway mark in the 4th round of the Blancpain Endurance Series. The n° 150 Manthey Racing Porsche 997 GT3 R took advantage of the retirements of both n° 3 and 4 Marc VDS Racing BMW Z4 to take a comfortable lead. In Pro-Am SMP Racing took the lead again thanks to the n° 70 Ferrari, but in this category five cars are battling close together. In the Gentlemen Trophy the quartet of the n°20 SOFREV ASP Ferrari 458 Italia increased its lead over the n° 52 Sport Garage Ferrari and the n° 111 Kessel Racing Ferrari.

When night fell, the first drops of rain fell as well. However, they did not influence the exciting fight between the n° 4 BMW of Nick Catsburg, Henri Moser and Markus Paltalla and the n° 150 Porsche of Marc Lieb, Richard Lietz and Patrick Pilet. The Marc VDS Racing clan took good advantage of a short rain shower to increase their lead, but around 2:30, the n° 4 BMW had to stop at Combes, due to an electrical problem.

That meant that the n° 150 Porsche of Manthey Racing took the lead, some 45 seconds ahead of the n° 3 BMW Z4. The n° 84 Mercedes SLS AMG GT3 drove in the same rhythm and was only one lap down in third position. The three teams passed the halfway mark in the same order, which meant that Bas Leinders, Yelmer Buurman and Maxime Martin reduced the gap in the Blancpain Endurance Series’ classification to one point. Current Series leaders Cesar Ramos, Daniel Zampieri and Davide Rigon (n°44 Kessel Racing Ferrari 458 Italia) were seventh in the Pro Cup after twelve hours of racing.

At 5:20 the Marc VDS Racing Team lost all hope of winning their home race, when the n° 3 BMW stopped at Pouhon with engine issues. The new virtual podium was formed by the n° 150 Manthey Racing Porsche, the n° 84 HTP Motorsport Mercedes and the n° 27 Rowe Racing Mercedes.

The Pro-Am category has seen the closest fought battle of the race. The n° 70 and 71 SMP Racing Ferrari’s increased their pace and took the lead of the category. They were having an interesting fight with the n° 50 and 59 AF Corse Ferrari’s. The racing order kept on changing, and all four cars remained in the same lap. After 12 hours the lead was in the hands of Alexey Basov, Matteo Bobbi, Alessandro Pier Guidi and Alexander Skyabin. That was still the case one hour later, even though their lead had been reduced.

In the Gentlemen Trophy Jean-Luc Blanchemain, Jean-Luc Beaubelique, Patrice Goueslard and Fred Bouvy – driving the SOFREV ASP Ferrari 458 Italia – kept on increasing their advantage over the n° 52 Sport Garage Ferrari. Even though they had a little scare just after the halfway mark, the n° 111 Kessel Racing Ferrari was still third.

Olaf Manthey, Team Manager Porsche 997 GT3 R Manthey Racing #150 :
“It was a very difficult night, with an exciting battle with the BMW’s. We stayed in front because we changed our strategy on drivers’ changes. They all go flat out, but are not able to do double stints… We will have to change the brakes somewhere soon, so we will have to continue to attack.”

Matteo Bobbi, Ferrari 458 Italia SMP Racing #70:
“The night went well, even though we had some difficult moments around midnight, when we were driving on slicks on a wet track. The car proved to be very efficient. There is no margin for error, the n°71 and the AF Corse cars are close behind. This really is a difficult 24-hour race, because of the heat and the traffic.”

Jean-Luc Beaubelique Ferrari 458 Italia SOFREV ASP #20 :
“Our strategy proves to be very efficient, we can all drive good stints. Every stint we gain around half a minute. We are the only team that can do double stints as well. We do not push the car to the maximum, that is why we avoid taking the kerbs too much. Fred Bouvy has helped us a lot here.”

24 Hours of Spa started with a six hour sprint 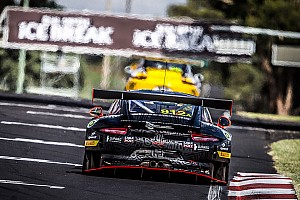 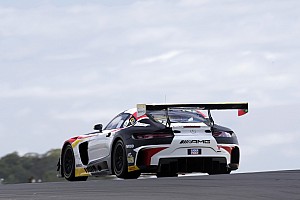