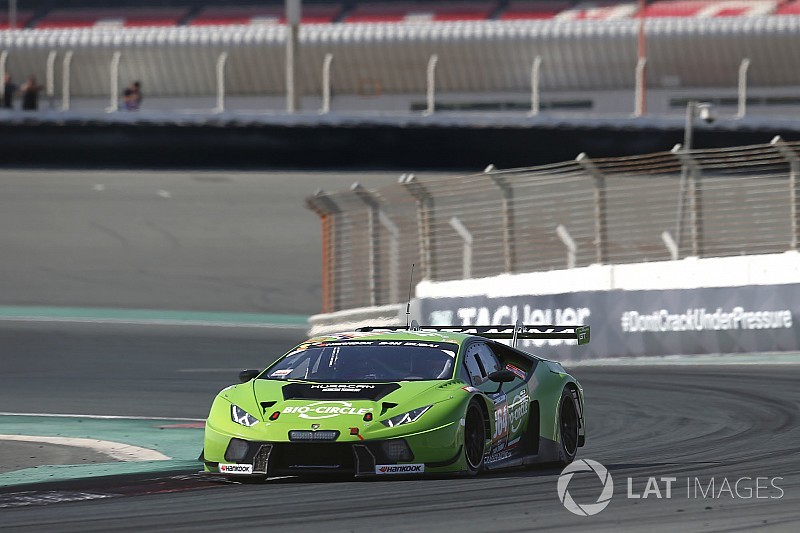 Bortolotti’s fastest time secured the second pole position for Lamborghini in history of the Hankook 24H Dubai. “Last year, we were unfortunate as we were taken out of the race,” Bortolotti said. “Of course, now we want to make up for that bad luck and we will do our very best to score the first win for Lamborghini here in Dubai.” The Black Falcon team saw its two Mercedes-AMG GT3s end up second and third, with the #3 car (Al Qubaisi/Bleekemolen/Stolz/Mezger) ahead of the #2 entry (Al Faisal/Haupt/Buurman/Piana).

Behind the wheel of the #63 race:pro motorsport Porsche 991 Cup (Misky/Sultanov/Bachler/Jahn/Foster), Austrian Klaus Bachler remained on top of the 991-Pro class throughout the session, but he managed to improve his own time again and again. Eventually, he secured the class pole with 2m01.429s, followed by the Fach Auto Tech Porsche (#62, Campbell/Andlauer/Preining/Richter) and the RScar Motorsport 911 (#82, Solovlev/Meshcheiakov/Gromov/Rusinov).

With a late flyer, Swiss Philipp Frommenwiler put the #61 Fach Auto Tech Porsche (Wagner/Bruder/Hegglin/Frommenwiler/Hirschmann) on pole in the 991-Am class. His fastest time was 2m01.633s. The race:pro motorsport Porsche (#67, Thorpe/McInerney/Quaife/Cappelli) qualified second in class, the Raceunion Porsche (#187, Autumn/Laser/Gülden/Skoog/Triller) ended up third.

In qualifying for the 24H TCE SERIES powered by Hankook, in which the SP3, TCR, CUP1 and A2 categories took part, it was British driver Jon Barnes who topped the time sheets with a time of 2m07.871s. Thus, he put the Century Motorsports Ginetta (#229, Freke/Barnes/Farmer/Paul) on class pole position with a margin of 0.734 seconds on Bradley Liebenberg, who qualified the CWS Engineering Ginetta (#178, White/Constable/Murray/Liebenberg) second in class. The Optimum Motorsport team (#232, Barwick/Moore/Hollings/Brough) completed the clean sweep of the top three both in the TCE SERIES and in the SP3 class for Ginatta teams. Jon Barnes was pleased with his performance: “This is my first time here in Dubai. I expected to be quick, but I didn’t expect to end up on pole with such a huge margin. The team did really well, we are looking forward to the race.”

TCR honours went to Belgian Vincent Radermecker, who put the AC Motorsport Audi RS3 LMS (#888, Perrin/Renneteau/Radermecker/Nitiss) into first place early in the session already and then gradually improved his personal fastest time to end up with a class-pole-winning time of 2m09.003s. The Modena Motorsport SEAT Leon TCR (#216, Shen/Shen/Tjia/Simonsen/Beche) qualified second while the Liqui Moly Team Engstler Volkswagen Golf GTi TCR (#130, Engstler/Thoma/Leuchter/Vernay) made it three different brands in the first three positions of the TCR class.

There was little doubt about who would claim the CUP1 class pole as Michael Schrey put the Hofor Racing powered by Bonk Motorsport BMW M235i Racing Cup (#131, Kroll/Schrey/Fischer/Küpper/Engljähringer) into first place at an early stage in the session already and his time of 2m16.119s was never beaten. The Sorg Rennsport cars rounded out the top three with the #151 entry (Epp/Danz/Richard/Caygill/Mettler) in second and the #152 car (Gu/Fei/Beyer/Hewer/Lawrence) in third place.

Danish driver Niels Nyboe was fastest in the A2 class with a time of 2m19.968s, putting the Jönsson Consulting Peugeot RCZ (#171, Jönsson/Mogensen/Nyboe/Hansen/Bruun) on class pole quite early in the session already. The Ciceley Motorsport team saw its two Renault Clios take second and third place, with the #164 car (Coates/Rettich/Hatfield/Jusjong) followed by its #162 sister entry (Morgan/Bird/Bird/Giddings).