The ninth running of the Dunlop 24H DUBAI, the first international endurance race of the new year for GTs, touring cars and 24H Specials, is in the books.

DUBAI (January 12th, 2014) – Silence has returned at Dubai Autodrome. The teams have packed their race cars and equipment into the containers, ready to be shipped to their home bases all over the world. The ninth running of the Dunlop 24H DUBAI, the first international endurance race of the new year for GTs, touring cars and 24H Specials, is in the books. “We can look back upon another great event,” says Gerrie Willems on behalf of Dutch agency, CREVENTIC, promoters and co-organisers of the race in co-operation with the Dutch National Racing Team (DNRT) and Dubai Autodrome. 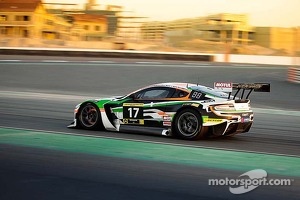 Looking back upon the busy, but beautiful week in Dubai, Willems says: “Everything went very smoothly and that is mainly the result of the great co-operation between CREVENTIC, management and staff at Dubai Autodrome, the people from the DNRT, the sporting authorities KNAF in The Netherlands and ACTUAE in the United Arab Emirates and Dunlop, our partner and exclusive tyre supplier. Over the years, the organisation process has become more and more streamlined. Everybody knows what other people need or want and when there is a problem, we simply look for a solution.”

Once again, there was plenty of media coverage for the event, with live TV broadcasts on Motors TV and other channels, a live stream on the internet, audio commentary during every session on Radiolemans.com and regular updates on Facebook and Twitter. Journalists and photographers representing print and online media from all over the world were present in Dubai as well.

“For me, there were some things that stood out in this year’s race,” Willems says. “First of all, there was a bigger crowd than in years before, Secondly, the great atmosphere among the teams and drivers, but also among everyone involved in this event, was a special thing. And last but not least, we had a very nice and colourful show on the starting grid, a beautiful fireworks display in the evening and our traditional prize-giving ceremony including the trademark camel ride after the race.”

Willems continues: “I would like to expresses my thanks to all sponsors and partners: Dunlop, Bilstein, Syntix, Nissan, Eimskip, Agility fairs & events, Speedcom, Dubai Calendar, Timeservice.nl, GPS Auge, Quattro Media and Stand 21. This was a great start of the 2014 season, in which we continue with four more races as part of our 24H SERIES powered by Dunlop: the Dunlop 12H ITALY-MUGELLO, the Dunlop 12H ZANDVOORT, the 24H BARCELONA and the Dunlop 12H HUNGARY. And, of course, we hope to be back again at Dubai Autodrome from January 8 till 10th next year to celebrate the tenth anniversary of the Dunlop 24H DUBAI.”

Podium finish for Chandhok in the Dubai 24Hrs

Craft-Bamboo Racing fired up for Fuji