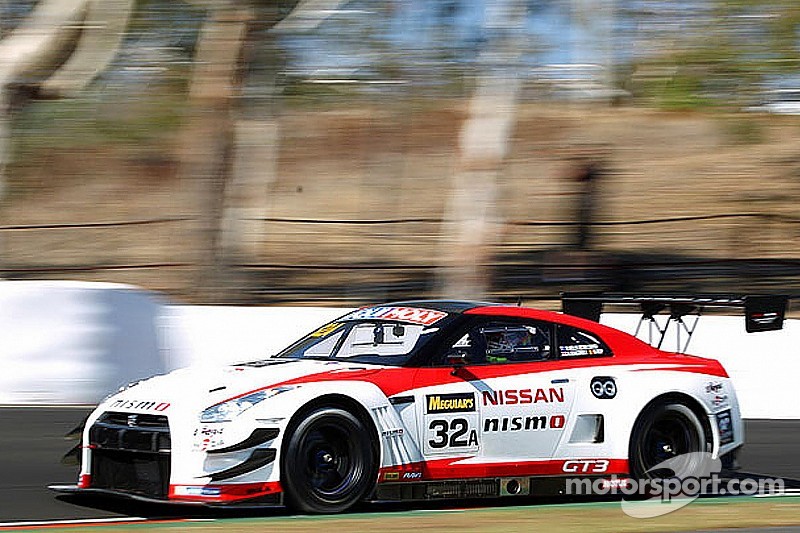 NISMO Global Team from Japan back for second try at endurance classic.

Nissan has confirmed that Alex Buncombe, Katsumasa Chiyo and Wolfgang Reip will return to Mount Panorama for the 2015 Bathurst 12 Hour race, driving for its NISMO Athlete Global Team.

The trio will line-up in the number 35 Nissan GT-R NISMO GT3 as the team seeks to build on the speed and potential shown at last year’s edition of the endurance event where Buncombe, Chiyo and Reip were joined by Nissan Motorsport V8 Supercar driver Rick Kelly in the team’s driver line-up.

The 2015 Bathurst 12 Hour is one of the first events in an enormous year of motorsport for Nissan, with participation in top categories across the globe.

2014, also the 30th anniversary of NISMO, saw the manufacturer score 42 wins and 82 podiums globally, including championship victory for the factory NISMO team in the Super GT Championship with Ronnie Quintarelli and Tsugio Matsuda in the #23 MOTUL AUTECH GT-R (Nissan GT-R NISMO GT500).

Last year’s Bathurst 12 Hour was the first time a factory-entered Nissan GT-R had raced at Bathurst since Mark Skaife and Jim Richards scored back-to-back Bathurst 1000 victories in 1991 and 1992.

Despite being the first attempt at the Bathurst 12 Hour, the strength and speed of both team and car was clear throughout the event, with the NISMO Athlete Global Team qualifying in fifth position in a quality field. After a solid start to the race, the car was unfortunately withdrawn after sustaining heavy damage in an incident at McPhillamy Park in the third hour of the race on lap 59.

Buncombe, the longest serving NISMO Athlete in Nissan’s global GT3 program that is also the training ground for Nissan GT Academy graduates, will be making his third Bathurst start in 12 months, having also teamed up with Todd Kelly in the Nissan Motorsport V8 Supercar team at last year’s Bathurst 1000. Buncombe also partnered Kelly at the Sandown 500 and Gold Coast 600 endurance events in 2014.

Chiyo returns to Mount Panorama with a wealth of new experience, having been based in Europe for most of 2014 as part of the Nissan GT Academy Team RJN squad in the Blancpain Endurance Series by virtue of the NISMO Global Driver Exchange program. Chiyo raced the Nissan GT-R NISMO GT3 in major GT events such as the Nürburgring 24 Hours, Spa 24 Hours, Bathurst 12 Hour and Macau GT Cup. Chiyo is one of the young rising stars of Japanese motorsport, winning the Japanese Formula 3 Championship N Class title in 2011.

Reip, the 2012 Nissan GT Academy Europe winner, who enters only his third year of motorsport in 2015, is one of the shining examples of Nissan’s gamer-to-racer mantra. Despite having no motorsport experience just three years ago, the Belgian driver’s CV already includes feats such as driving the first fully-electric lap of Le Mans and second place at the 2014 British GT Championship event at his home circuit of Spa-Franchorchamps.

The 2015 Bathurst 12 Hour will be held at the Mount Panorama circuit on 6-8 February 2015. Check NISMO.tv for video content from the event and follow on Facebook at NISMO Australia.

Alex Buncombe: “I’m really looking forward to getting back to Bathurst. I feel we have some unfinished business there as we never got to show the full potential of the Nissan GT-R NISMO GT3 in 2014,” said Buncombe.

“The circuit is simply amazing, like no other. You have to treat it with the upmost respect. My V8 Supercar experience from last year will put me in a better position this time so I can't wait to get back behind the wheel, especially as the flowing corners and long straights at Mount Panorama are just what the GT-R loves.

“The atmosphere at Mount Panorama is spectacular with the most enthusiastic fans I know. We showed very well last year in the running we had so my expectations are high - I would love to walk away with a podium.”

Katsumasa Chiyo: “I’m really pleased to come back to the Bathurst 12 Hour race because last year our first challenge ended after only a couple of hours due to the big accident in my stint,” said Chiyo.

“I felt so sorry for the team. That’s why I’m really looking forward to racing again at Bathurst for the revenge.

“Unlike last year, I feel very confident because this isn’t my first time and I’ve learned a lot from last year. In addition, my team-mates Alex and ‘Wolfie’ are very trustable, we have good relationships and our team, NISMO Athlete Global Team, is very professional and reliable. But the only thing I’m sad about is that Rick can’t join this year due to a schedule clash.

“This event has many accidents during the race every year, so I think.it is one of the most difficult races. We definitely must drive carefully all the time, because we can’t know what will happen until the last second and we must be careful about kangaroos as well.

“Finally, I will do my best until finishing the race with all of the team for all our fans!”

Wolfgang Reip: “Mount Panorama is one of the most magnificent tracks I have seen! It’s very difficult mentally; I would say it is as hard as the Nordschleife. I have raced on both and I would say that although Bathurst is shorter it is just as challenging,” said Reip.

“Racing at Bathurst as a European is a great feeling because not that many drivers get an opportunity like this during their career. It’s a privilege to be given that opportunity for the second time in a row alongside Alex and Chiyo.

“My expectations are always high for this event. We have a strong close-knit line-up and we can all push hard from the start.

For sure it will be tough, due to the track itself and the amount of traffic we have to deal with but last year we were running in the Top 5 when the crash happened so we can expect at least as good as that. Let’s aim for a podium and we will see after 11 of the 12 hours where we are!”

“It’s true that we have unfinished business at Mount Panorama,” said Cox.

“We want a good result in this historic event and we have a great team of people in place to make sure we meet our own high standards. It was important for us to give Al, Chiyo and Wolfie another shot at the Mountain and I think together they will get the best out of the GT-R.”