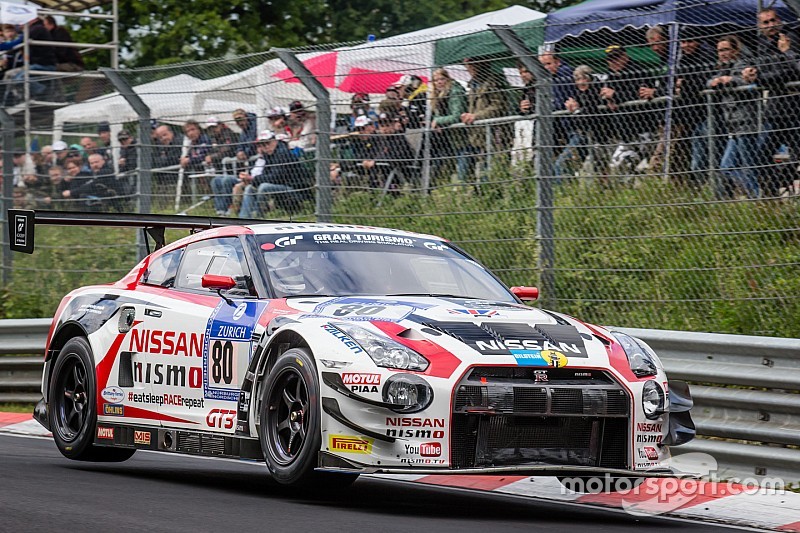 The Japanese manufacturer has been busy collecting trophies at Nurburgring in recent years...

Nurburgring, Germany – Nissan is ready to launch one of its strongest ever assaults on the Nurburgring 24 Hour led by three Nissan GT-Rs and four former GT Academy winners next weekend.

The Japanese manufacturer has been busy collecting trophies at Nurburgring in recent years including clinching last year's Blancpain Endurance Championship on the Grand Prix course, scoring the Pro-Am Driver's Championship at the same venue for Lucas Ordóñez in 2013 and the Spanish GT Academy ace also taking victory with legendary Gran Turismo creator Kazunori Yamauchi in SP 8T class in the 2012 24 Hour race on the Nordschleife.

German NISMO legend Michael Krumm also set an incredible 7 minute 8.679 second lap of the Nordschleife to record the fastest ever volume production car lap in 2013 aboard a road-going GT-R.

Hopefully we can have a dream race like last year.

The factory entry will be joined by three-time race winners Zakspeed who will race the No.48 GT-R with GT Academy winners Florian Strauss and Marc Gassner plus Dutch veteran Tom Coronel.

A fourth GT Academy winner, Frenchman Jordan Tresson will drive in the Schulze Motorsports GT-R in the SP 8T class

This weekend's Nurburgring assault follows the launch of the new Gran Turismo GT Sport PlayStation game in London last week. Ordóñez was on hand for the launch to get some early "virutal" laps in preparation for this weekend's race.

"When I first drove at the Nurburgring I did a lot of miles in preparation on the PlayStation to prepare and it remains a very beneficial tool," Ordóñez said.

"This is the most challenging, most exciting and toughest race in the world. Last year's top ten was an amazing result for NISMO and I have a dream line-up of teammates again.

"Hopefully we can have a dream race like last year. We stayed out of trouble and was mistake free. We'll be fighting hard again and plan to get a fantastic result.

"In the qualifying race in April we completed a lot of miles and everybody had the chance to sample dry, damp and wet conditions.

"We finished 10th overall and everyone was very happy to now be locked in for the top 30 qualifying session for the Nurburgring 24 Hours."

The Zakspeed GT-R entry is also locked into the 40-minute top 30 qualifying session which will be held on Friday evening from 7:50pm.

Audi aims to repeat 24-hour victory at the Nürburgring