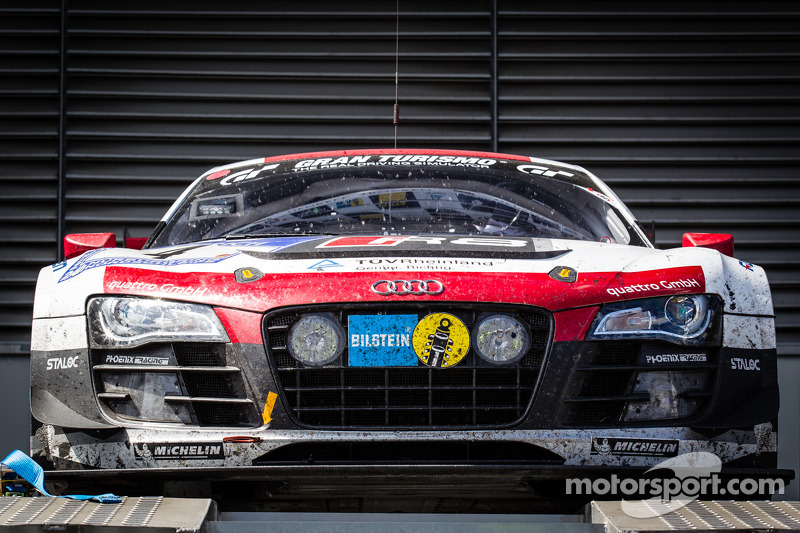 Audi wins it all at the Nurburgring.

Just one week after an Audi emerged victorious at Le Mans, the manufacturer has tamed the brutal Nurburgring circuit. The No. 4 Phoenix Racing Audi R8 LMS ultra ran a remarkable race, completing 159 total laps. René Rast, Christopher Haase, Christian Mamerow, and Markus Winkelhock are the drivers of the aforementioned Audi.

They were followed by the 2013 race winners (Black Falcon), who's No. 1 Mercedes SLS AMG finished the race three minutes adrift of the winner. The No. 22 Rowe Racing Mercedes filled out the final spot on the podium. The No. 44 Falken Motorsports team led the way for Porsche in fourth, with the No. 007 Aston Martin rounding out the top five.

The story of the winning Phoenix Racing entry's sister car was not nearly as glorious, as the video below shows...

Fortunately, the early carnage did not become a theme in the race. The most controversial incident happened when a Viper almost drilled an intervention car, but slammed into a Mini Cooper instead.

Both Marc VDS Racing BMWs retired overnight after accidents within a few minutes of one another. The pole-sitting No. 66 Dorr Motorsport McLaren failed to finish the race as well. High attrition is always a trait of this grueling endurance race that pushes man and machine to the absolute limit.

Rotek Racing on a recovery drive as darkness descends over Nürburgring