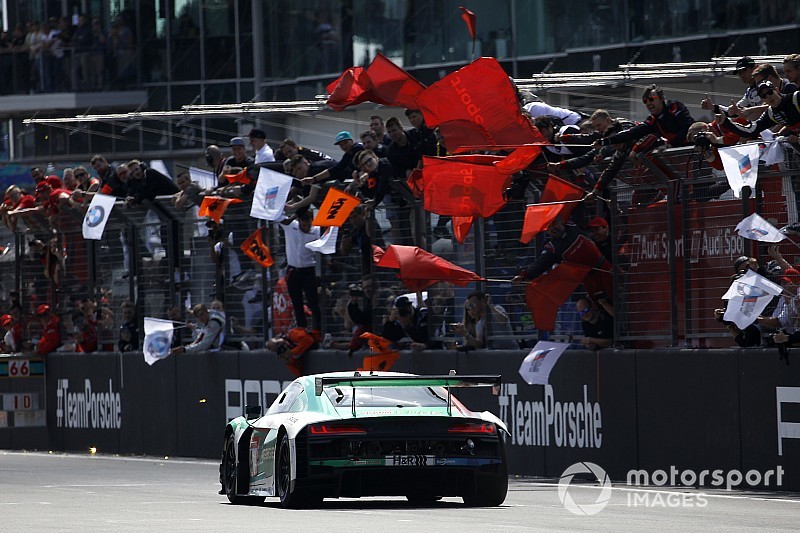 Audi Team Phoenix secured its fifth win in the Nurburgring 24 Hours after the Porsche that dominated most of the race was hit with a big penalty in the closing stages.

Dries Vanthoor brought the #4 Team Phoenix Audi R8 LMS to the chequered flag after the squad completed 157 laps around the 25km track.

The young Belgian kept a furious Kevin Estre in the #911 Manthey Racing Porsche 911 GT3 R at bay in the last hour of the race after that car was hit with a big time penalty.

Dramatic scenes in the final hours of the 47th running of the big race shook the running order up.

The #911 Manthey Porsche was leading in comfortable fashion when it was hit with a stop-and-hold penalty of 5m32s for speeding in a 120km/h speed zone and ignoring double yellow flags.

Laurens Vanthoor, who was driving at the time of the infringement, completed the zone with a speed of 172km/h.

After Michael Christensen served the penalty, Vanthoor took over and dropped originally to fourth place, but dramas for several frontrunners meant Vanthoor was soon back in second.

The #29 Team Land Audi initially took the lead but Kelvin van der Linde hit trouble on lap 139 because of a flat tyre, which shredded the back end of the car and caused problems to the cooling system. Van der Linde was unable to bring the car back.

The third-placed #6 Black Falcon Mercedes then also lost touch with the leaders when Nico Bastian crashed the car at Wippermann.

It gave the lead on the 141st lap to the #4 Phoenix Audi of Vanthoor, Pierre Kaffer, Frank Stippler and Frederic Vervisch, and Vanthoor kept Estre behind in the final hour of the race to seal victory.

Estre finished comfortably in second in the #911 machine he shared with Laurens Vanthoor, Michael Christensen and Earl Bamber, with Hubert Haupt bringing home the #3 Black Falcon Mercedes in third place for himself, Maxi Buhk, Thomas Jager and Luca Stolz.

Christopher Haase came quite a bit short of a podium in the #14 Car Collection Audi he shared with Markus Winkelhock, Marcel Fassler and Rene Rast, who were also hit by time penalty in the penultimate hour of the race.

The #12 Frikadelli Porsche of Matteo Cairoli, Otto Klohs, Lars Kern and Dennis Olsen finished in P5 and took the win in Pro-Am.

BMW endured a shocking race after it lost five of its six protagonists for the win in the opening half of the race. The lone surviving M6 GT3 of Falken Motorsport ended up in sixth place.

The swansong outing for the Scuderia Cameron Glickenhaus SCG003C resulted in ninth, while Nissan rounded out the top 10, despite both the KCMG-run cars hitting trouble overnight. The #45 Kondo Racing GT-R was the lone survivor for the Japanese manufacturer.

After briefly leading in the second hour of the race, the #1 Manthey Racing Porsche was confirmed a retirement early on Sunday morning. The car suffered a flat tyre which dropped it to 30th place in only its second stint.

After repairs it came back on track and was cruising just outside of the top 10 when it was involved in another incident which put the car driven by Richard Lietz, Nick Tandy, Fred Makowiecki and Patrick Pilet out of the race.

The #48 Team HTP Mercedes that was second with six hours remaining was eliminated when Maxi Gotz hit the barriers with a little over five hours to go, while the #31 Frikadelli Porsche that had also been in the top three retired after suffering a tyre failure.